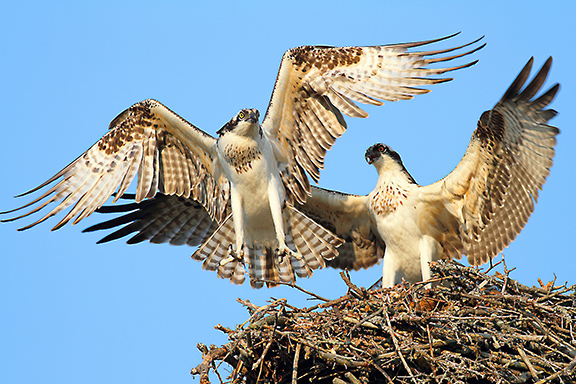 Photo above, an adult and juvenile osprey. The adult osprey has yellow eyes. Inset photo, an osprey soars over the Rosetta McClain Gardens on the shores of Lake Ontario and the Scarborough Bluffs. Photos by Ann Brokelman.

It’s that time of year again! (How often do I start my articles with some version of that expression?) Well, in this situation I’m referring to the time where you should be looking up into the skies to watch for migrating raptors.

This, because it’s the one I’m thinking about at this moment, is my favourite time of year! If you have no idea what I’m talking about, this is the time of year when bald eagles, ospreys, peregrine falcons, turkey vultures, broad-winged hawks, golden eagles, and many others, are all starting their journeys south to avoid our winters.

If you know where and when to go, you could catch a glimpse of dozens, or even hundreds, of these birds on any day between now and the end of the migration period.

If you’re in Toronto, head to beaches on a day with a good north-west wind and keep your eyes on the skies. For a special opportunity, head for the Scarborough Bluffs and you might even catch sight of them flying over the lake at eye level.

One of the species of raptors that I enjoy, as there’s nothing else quite like them around here, are ospreys. If you’re wondering what I mean by ‘nothing quite like them’: Ontario has multiple species of owls, several types of hawks and falcons, and even two different eagles, but other than a relative found all the way over in Australia and Oceania, the osprey doesn’t have another bird quite like it.

Ospreys are amazing hunters and search for fish by flying on steady wingbeats and bowed wings and by circling high in the sky over the water.

They often hover briefly before diving, feet first, to grab a fish.

Can you picture a bald eagle skimming along the top of the water, plucking out a fish with its talons, and flying away without getting wet? Well, that’s just not the osprey’s style.

This bird will dive feet first (though it may look like they are going in headfirst) into the water, fully submerge itself while grabbing a fish, and then swim back to the surface before taking back to the air. It’s a remarkable event to see and I encourage you to look up a slow-motion version on YouTube when you have a chance. Ospreys can live as long as 20 years, eat mostly fish, (but will also eat squirrels, lizards and insects,) and annually migrate to a variety of places between North America, the Caribbean, and South America. Ospreys have a wingspan of 1.8 metres (almost six feet). Osprey chicks can fly when they are only seven to eight weeks old and the parents will usually have two of their three chicks survive until they can leave the nest.

One of my favourite birding moments came when I was able to release a pair of ospreys that had come into wildlife care. One was an adult, the other a juvenile.

Though they were about the same size, it was easy for me to tell them apart because when you are close to them you can see how the eyes of an adult are yellow, whereas the juveniles are bright red/orange.

From a distance you must look at their coloration of their wings: the adult wings will have a solid coloring compared to the speckled appearance of the younger birds. The two birds we released bonded during their time there and the experts decided to let them go them together. My younger daughter released the ospreys with some help from her boys Jason and Josh.

The birds took off, together, without a word of thanks, but watching the two healthy birds return to the wild was the best thank you I could ask for.

One final piece of advice: If you do head over to join this season’s raptor watch, keep in mind that an osprey can easily be mistaken for a large gull. I’ve made this mistake myself on many occasions. Take an extra second to see if the bird has dark wings and you may find yourself staring at one of our most beautiful, and unique, birds of prey.

Enjoy the cooler days and the new wildlife viewing opportunities they present!