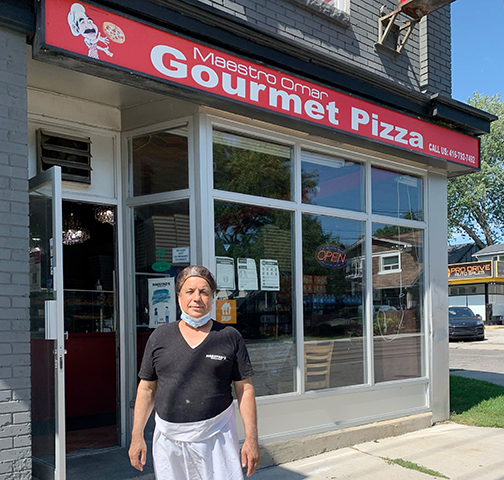 Hossain Omar in front of his Maestro Omar Gourmet Pizza store on Kingston Road in the Beach. Omar is trying to help his own family and others come to Canada from Afghanistan in the wake of the takeover by the Taliban. Photo by Mimi Liliefeldt.

Over the last month, the world watched in alarm as the Taliban took over Afghanistan.

For most of us, the realities of Afghanistan’s history are no more than “news stories” that never quite touch our own microcosm.

Lately we talk about all the ways that we are privileged, almost any one of us can name at least one way in which we are more fortunate than someone else.

And now, the news of the Taliban take over has given the majority of us yet another reason to reflect on that privilege. Somehow, through nothing but sheer luck, we live here in Canada in this beautiful neighbourhood we call the Beach.

For 84,000 Afghan Canadians (as of 2016 Canada Census), they too can feel the privilege of calling Canada home. But for many of them their gratitude is overshadowed by the fear and anxiety they feel for their loved ones left behind.

Hossain Omar (he prefers to be called Omar) of Maestro’s Gourmet Pizza on Kingston Road between Queen Street East and Dudans Street East is one of the thousands who still has family in Afghanistan.

Omar left Afghanistan and claimed refugee status in Pakistan in his mid-teens. Afghanistan was fighting with Russia at the time. “My parents didn’t want me to fight,” he said.

“I used to work as a mechanic’s assistant because I was educated, and they needed someone who could do the banking and inventory,” he told me.

Omar spent three years in Dubai before applying to both France and Canada for a visa.

When the Canadian visa came through, he seized the opportunity and flew to Toronto.

He arrived in Canada in 1987, explained his situation to the immigration officer, and they immediately took him through the process of claiming refugee status.

“The first couple of months they helped me with social assistance and gave me an apartment. For three or four months, then I started working and stopped the social assistance. I finished my high school part time and worked part time,” said Omar.

“Then my parents, brothers and sisters went to Pakistan as refugees. So, I started to work full time to support them. That’s why I didn’t go to college or university. I was lucky at the time I was working two good jobs.”

Since those early days in Toronto, he’s had many jobs, from working as a hotel dishwasher to a factory job as a machinist, to eventually starting his career in the food and service industry.

For 30 years now, pizza making, managing and franchise ownership has been Omar’s career.

The last franchise he had was Pizzaiolo, for 10 years on Kingston Road, until he took the leap three years ago to start his own pizza company, Maestro’s Gourmet Pizza in the same location.

“I’ve been making pizza for the last 30 years. At the start of the transition I suffered a lot, the franchise took my phone number and that’s how a lot of customers would contact me. So I had to advertise again for myself to the neighbours and local people, and then they came back to me and now I’m happy.

“I’m so appreciative to all my Beach customers who support me. They all know my quality and so they came back,” he said with great pride.

Omar deserves to be proud of what he’s accomplished. He works hard for his family and gives his children everything, as well as pizza businesses of their own.

He is selfless in his dedication to help his children and family in every way possible, including taking on all the financial responsibilities for everyone. “That’s why I work seven days a week. I’m the father. Right now I work and I give the money to the bank, that’s it.”

If this were his only concern, it would still be a big one, but Omar has a wife and family stuck in Afghanistan.

“This year in April I got married to my new wife. I came back in June, but my wife is still there, and I’m worried about her. I talked to her this morning, she said she is still very afraid. I didn’t know the situation at the airport too much, but my wife called, and she said, ‘I heard the news that American and Canadian planes are coming to pick up people from the airport so I wanna go’. I said, ‘The airport has security, there will be police officers or guards’, but there was nothing. So she went and called me, she said, ‘There’s over a hundred thousand people here, people are dying, suffering’. Her niece got injured (a bullet grazed her head), and I said ‘OK go home, get out of there. Don’t go out.’”

With the help of his son-in-law, who worked as an interpreter, they are talking to immigration lawyers to try and find a way to get his wife out of Afghanistan.

His son-in-law (whose name Beach Metro News is not publishing for the protection of those in Afghanistan) was also present at my interview with Omar.

He said, “If somebody over there finds out her husband is in Canada, this will be a problem for her as well. God forbid if she got kidnapped.”

I naively asked if this was a real threat, and he said, “It does happen a lot right now.”

On top of trying desperately to rescue his wife, Omar said, “Right now I have 75 families on my list. They all send me messages, ‘We are suffering here, we are scared. Do something, help.’ And I cannot do it. I feel really bad.

“I haven’t slept since the Taliban took over. They think it’s easy and that everything in Canada is possible. I say “No, it’s hard.” Most of them have no houses, they live in the park, some of their houses got destroyed, some move because they are scared of the new forces. Even money wise I cannot help them. One or two people OK, but 75 families?”
The stress of not being able to fully help his friends and family is wearing Omar down, but he is far from out.

But in the latter statement he’s wrong, because Omar as always is trying to help.

Together with his sons’ pizza businesses (Maestro’s Gourmet Pizza –three locations including the Beach – and Big Brothers Gourmet Pizza – two locations in Scarborough) they are taking a dollar from every pizza pie order and donating it to homeless people in Afghanistan.

Omar and his sons are only one family; he’s a man that has faced many challenges and worked hard to provide for the people around him.

It’s time we collectively take more initiative amongst ourselves to expand our thoughts, actions and generosities to worlds outside of our own. You can be a part of the efforts in big ways and small. And while you contemplate all the options on how you can support the good fight, order a pizza from Omar knowing your small contribution will connect you to a life in need, not a news story.