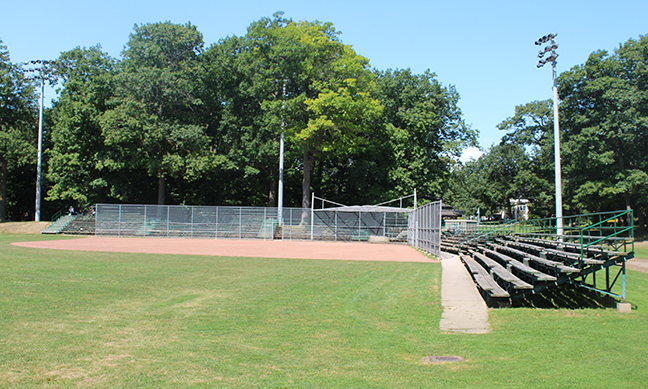 Baseball has been around for a long time in the East End, especially in the Beach area.

There have been professional teams in both the western and eastern parts of Toronto, but that is for another column. We here in the Beach are concerned with the “amateur” baseball teams.

Originally, as I have written about before, baseball was played in the back of what is now Ted Reeve Arena. It was in the 1890s and it was then known as the Grand Trunk Athletic Grounds.

Back then it was played by railroaders and players from other areas and religious institutions. Baseball also became part of the Kew Beach athletic scene and later at Balmy Beach from about 1905 on.

But let’s jump up several years to the heydays of amateur baseball in the Beach.

Baseball in the Beach is still alive and still sliding into home plate after more than 100 years.

Walking down to Kew Gardens recently, I was amazed to see a baseball game being played at night. You might say it was a night of “fly balls” and outfielders “snagging” them. Which is nothing new; that’s baseball – a game that has been around for more than 150 years.

The players that night were good and well worth watching. For me the only difference from the old days was that the teams were made up of both men and women.

Following baseball through the years in the Beach, there was a decline in attendance for games featuring amateur teams due mostly to professional teams gathering most of the public’s attention.

But please remember baseball is still alive in the Beach and it is still a pleasure to watch a game in Kew Gardens.

I spoke to one of the organizers of the league playing the night I was there. Greg Hill told me this particular league had started in 1999 as co-ed.
Prior to that several other leagues played on the diamond, which is surrounded by bleachers that once held thousands of fans on them and in the wider area of Kew Gardens. Now those stands hold mostly just a few fans, but the players are still throwing, hitting and catching the ball and cheering each other on.

Greg told me his dad had been involved in organizing baseball leagues as well, so it runs in the family.

Baseball is still going strong in Kew Gardens, and going down to watch a game is a great way to spend a September night. As Greg said, “Play Ball!”