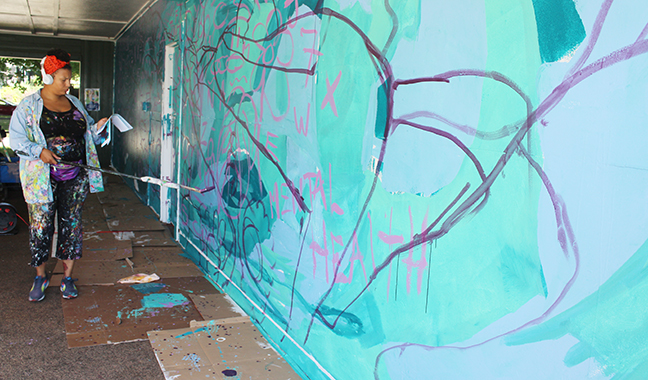 Artist Jacquie Comrie is shown on Friday morning working on the mural she is creating for the east wall of the Leuty Boathouse. Photo by Alan Shackleton.

One of the two murals planned for the inside walls of the Leuty Boathouse in the Beach will be unveiled on the afternoon of Sunday, Sept. 12.

Everyone is invited to celebrate the completed mural by artist Jacquie Comrie on the east wall of the boathouse at the unveiling set for approximately 3 p.m.

A second mural had also been planned to be done on the boathouse’s west wall by artist Chief Lady Bird, but she was unwell this week and the work will be completed later this year.

The murals are part of an art reinvention for the Leuty Boathouse which is located just north of the Boardwalk near the foot of Leuty Avenue.

The art reinvention celebrates the work of Comrie and Chief Lady Bird, who are both BIPOC artists.

For more on the mural plans for the Leuty Boathouse please see our earlier story at https://beachmetro.com/2021/09/07/art-reinvention-planned-for-walls-of-the-leuty-boathouse-this-week/