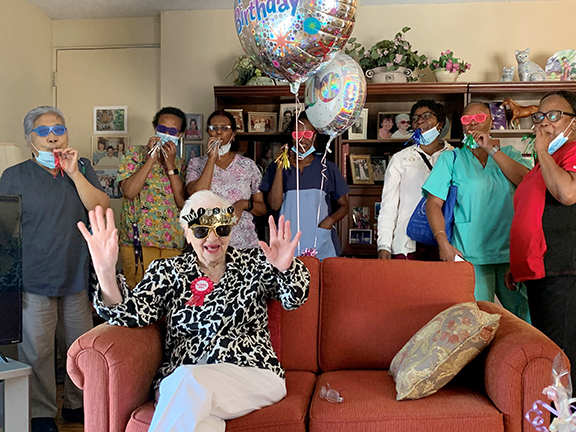 East Toronto resident Ruth Nadeau turned 100 on Saturday, Aug. 28, and celebrated her birthday with staff from The Neighbourhood Group the day before in her residence in the Cecelia Murphy Building on Coatsworth Crescent.

“I just feel the way I feel, and I feel pretty good for 100. I never believed I would live this long, but here I am,” said Ruth in an interview with Beach Metro News this week.

Ruth said that her birthday party on Friday, Aug. 27 was so great that she couldn’t stop smiling.

“It was just swell. The staff that works here in my building came dancing in singing Happy Birthday…with two great big balloons saying ‘Happy 100th birthday.’ How great is that, no wonder I was smiling,” she said.

Ruth was born and raised in the west end of Toronto in 1921 and has since seen the world change through major events such as the Great Depression, the Second World War, and the COVID-19 pandemic.

Ruth looks fondly back on a major event of her childhood, when she sang in a double trio in her public school years and even performed at Massey Hall.

“We were called the invincible double trio because nobody could beat us, and we went all around and competed in songfests…I often wished we made a record so I could hear it through my own ears.” “Mother sometimes thinks she’s lived an unremarkable life, but she’s lived a remarkable 100 years…My mother came from the days of milk, eggs, bread, and butter being delivered by horse and carriage…she’s come from that to seeing people going up to touch the outer space edge for fun,” said Linda.

After Ruth graduated from Northern Secondary School, she went to work as a secretary. At a firm called Tippet Richardson, she met Doug Nadeau, a member of the Royal Canadian Air Force and her soon-to-be husband.

“We fell in love at first sight, instantly. It’s the only way to fall in love…Doug asked me out and I said yes, absolutely. And of course, he asked me to marry him right on our first date,” said Ruth.

Because of Doug’s work in the Air Force, Ruth followed him around to different bases around Ontario and in western Canada. When they returned home, they decided to start a family and had three children: Donna, Linda, and Paul.

“They started their love affair. My dad unfortunately passed away at 58, but it was an absolute love affair and she’s still in love with him. She never married anyone else after that, she said that she had the best and that he was the last one she would be with,” said Linda.

Linda said that Ruth worked for many years as a receptionist at the law firm McCarthy Tétrault, and had a great career there until her retirement in her late 60s.

“Her retirement years were spent with family and of course with her sister Audrey…the two of them did so much together, all the time they would be playing cards, visiting, taking day trips together, and doing things well into their 80s,” said Linda.

Ruth was involved in many sports throughout her life, including tennis, baseball, volleyball, and even cross-country skiing into her 70s.

“I played all the sports in school. I ran all the races and played on the baseball team, and I did everything, I learned tennis in school, too,” said Ruth.

“My mom is feisty. She’s a battler, and she’s the kind of person that doesn’t back down from too much…She was always a sportswoman when she was young and loved playing them,” said Linda.

Linda said that her mother has lived a full, happy, and healthy life.

“She’s still got that spirit in her and a great sense of humour. She’s great, and she and I are great friends.”

Ruth said that she’s happy she was able to spend her birthday surrounded by family and friends. She said that she received 100 roses from family in different colours and that she loves that her unit is covered in flowers.

Ruth said that she had a fantastic time celebrating her 100th birthday, and Linda said that Ruth plans to be here for birthdays to come.

“I’m a very lucky person. But if you give out love…you should get it back, if you have a good family. You get back what you give out, usually, in this lifetime,” said Ruth.