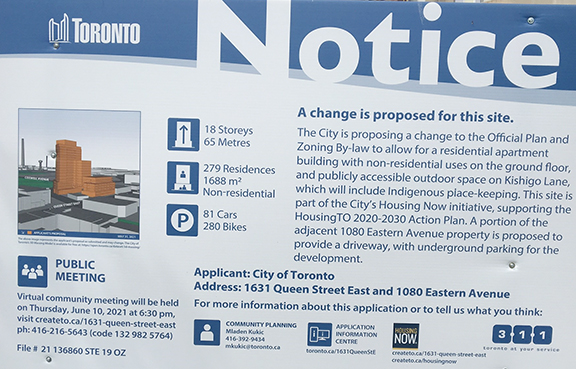 The proposal for 1631 Queen St. E. (which is located on the east side of Coxwell Avenue between Eastern Avenue and Queen Street East) includes an 18-storey building that will front onto Eastern Avenue.

Over the last several months, I’ve been speaking to many community members about a small but vocal minority continuing to spread misinformation over the Housing Now proposal at Queen Street East and Coxwell Avenue.

If there’s one simple take-away from all of the conversations happening, it’s how greatly it matters that we speak up for the things we believe in.

Let me be clear. It’s important to make a distinction from community members who are engaged and working hard to make the proposal the best it can be. They are not the same people spreading lazy half-truths or capitalizing on fear to disrupt affordable housing, as we unfortunately see in many communities across North America.

The vast majority of our community supports affordable housing. They support exactly the vision this project offers: a mixed-income community with homes people can afford, as well as all kinds of new community benefits, like an expanded Coxwell Early Learning and Child Care Centre and new public space in the form of Kishigo Lane.

What is offered in the City of Toronto’s Housing Now program, and in this particular proposal, is simple.

Housing Now is a city-wide effort born from the idea that – in the midst of a housing crisis – the City should use its own lands to build housing.

So far, this initiative has identified around 20 City-owned sites across Toronto to be developed for affordable housing. The model is the only practical approach the City has to build new homes without being provided billions more dollars from other levels of government.

It’s also based on straightforward equations from the realities of construction, materials, and development costs: the more units built, the more affordable housing we can deliver. There must be a mix of affordable and market housing because the market housing helps to pay for the affordable units.

The City’s criteria for evaluating any zoning changes for a Housing Now project are the same as any other development proposal.

Like all applications, the plan has to be evaluated by City Planning to assess it against all of the existing policies, guidelines and criteria set out in Ontario’s Planning Act and related legislation.

The goal of this proposal is to meet the objectives of the Queen Street East Urban Design Guidelines (UGD).

With a six-storey frontage on Queen Street and most of the density set back onto Eastern Avenue, the building is designed within the guidelines, avoiding shadow and maintaining the high-street village feel that Queen East is known for.

This proposal will not set a negative precedent for future developments.

Within the UDG boundaries, 1631 Queen Street East is unique due to its large size and lot depth (approximately 80 metres, making it the deepest lot in the entire UDG area).

The site also has frontages onto two major streets. There just aren’t similar sites where an argument for this kind of proposal could be made.

By moving this project forward, we expect to get around 150 homes for people to build a life.

As an example, “affordable” rents would mean a two-bedroom apartment priced in a range between $670-$1,330 per month, offering a home for many people, like the frontline, essential workers we’ve celebrated throughout the pandemic.

This is quite literally putting money to the slogans we’ve been saying for the last 18 months.

I’m asking everyone who shares this vision to speak-up. This is one of the most thoughtful and engaged communities that I know. Please take the time to be informed, and help others to be too.