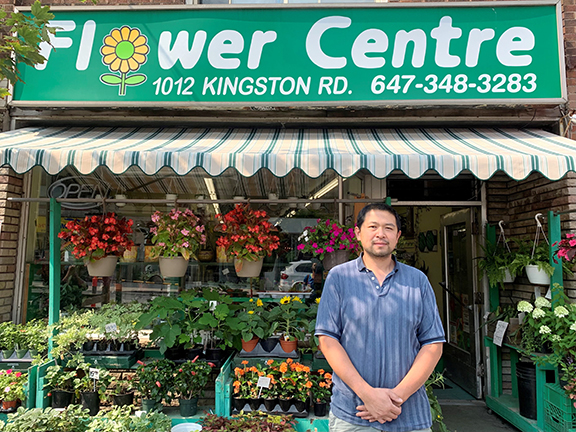 Andy Sue in front of the Flower Centre on Kingston Road. In January of last year he was confronted with racial harassment, and made the decision to speak up about it and share with the community and media what had happened. Photo by Mimi Liliefeldt.

In a perfect world there is no racism; no inequalities, no injustices, nobody has to stand up for anyone else because there’s nothing to stand up for. In this utopian world we are all equals and treated as such.

As it happens, we live here, in the real world.

Our world is flawed, difficult, and often times grossly unfair. Having said that, we are also gifted with enormous amounts of opportunity to change it.

One neighbour we all know mustered his own courage to change our small corner. Andy Sue is the proud owner of Flower Centre on Kingston Road which he runs with his wife Wing Ye.

In January 2020, he told local media about the intense racial harassment he was subjected to by a random woman who came into his store. “The things she said to me left me dumbfounded. She said things I’ve never heard uttered before from anyone. It’s forever scarring. I can always relive it.”

The woman used the emergence of the coronavirus in China as the launchpad for her racially driven abuse.

Andy’s family has owned the flower shop since 1972. He grew up around the business, and through osmosis he learned more than he realized about how to care for plants and customers.

His parents came from China and were quiet and hardworking. They had their boys here in Canada, and because of the responsibilities of owning a store, rarely ever went back to visit. “Holidays were not happening,” he said of the many years his parents tirelessly ran the shop.

At George Brown College, Andy took a tool and dye maker course. After working various jobs, Andy’s uncle, who had been running the store for a few years, was stepping down. Andy’s father asked him to take over the family business.

Andy was hesitant and thought, “What do I know about the business?” But his father was quick to point out that he grew up around it, and he’d be surprised at how much he actually knew.

“I figured I had nothing to lose, and it is the family’s legacy, so we’ll see how it goes,” is how he described his decision to take the reigns.

It’s been 10 years since Andy and his wife have been running the store. “It’s gratifying, if not the most work I’ve ever had to put into any job,” Andy said as he spoke about the long hours and numerous responsibilities. The security of a steady income is tenuous, but the satisfaction of autonomy places the reward much higher than the risk.

And in life, it’s important to carefully weigh the risk versus the reward in many situations. Andy did that in January 2020 when after much consideration, he decided to share his story of racial harassment.

“Speaking out was a leap of faith. It definitely goes against what I saw growing up, my parents are mild mannered, quiet people. Never rocking the boat. I went against everything I know by standing up and ‘shouting it out’. It was truly the hardest thing I’ve ever done. I had no idea what I was getting into.”

The story went viral. The news travelled and trended all over the world, including China where some of his mother’s friends reached out to say they had just read about Andy’s story. Seeing how far the story went, and realizing it had struck a chord locally and internationally surprised him. “I felt really proud to be Asian. I made a difference, I actually made a difference,” he said.

Telling the truth wasn’t easy. After he gave the first interview he started to worry, “What about backlash? Are protesters going to show up outside my door? Am I going to get threatening letters?”

Luckily it turned out to be a positive experience. The biggest media circus day was when David Brown of Fearless Meat offered customers who showed a receipt from the Flower Centre a free burger. Mr. Brown offered the deal all weekend in show of support to Andy, and to counteract the senseless racial discrimination.

“The day it happened, so many people came in. Neighbours, friends, local MPs came to show their love and support. People could feel the good energy in the store, it was tangible. I’ll never forget that,” Andy said fondly.

The most powerful moment of that already incredible day was when a Japanese man he’d never met before and didn’t live in the area came in to see him.

“He was a tall man, but you could see the hurt and abuse he’s gone through. We talked a little bit and I pulled him in, I said, ‘You need a hug man’. He was stiff as a board, he was shaking, you could feel his pain. I didn’t know you could feel other people’s pain. He eventually relaxed and hugged back. He said, ‘Thank you’. He was crying, I was crying. I couldn’t feel more human at that point.”

Through Andy’s bravery, he gave that man and many others a feeling of community and pride. “I wanted to show people we don’t have to be the quiet Asian stereotype. We can stand up. We can be proud,” Andy said of his decision to speak up.

It takes a lot of courage to speak up, it takes even more to speak up for yourself. This is why we have to be there for each other.

When Andy’s harassment took place, he was unfortunately alone, caught off guard and humiliated. Often times we are witnesses to these events; they aren’t happening to us and yet we still say nothing. This failure to intervene, to distract, to diffuse is cowardice.

We all want to see ourselves in a better light. We want to believe that we are allies, but if we can’t find a way to demonstrate it, even make eye contact, then we let the oppressors win.

There is a risk with inserting yourself, but there are ways to assist and support without escalating situations, and we need to learn and teach each other how because we can’t expect everyone to fend for themselves.

Nobody wants to be alone in these moments, and when you do nothing you are silently allowing the dehumanization of one person from another.

Hopefully as our worlds expand and educate, we will have less of these occurrences. But it’s important to remember there is a reward for standing up for your fellow human. The reward is knowing you have done what’s right. You have shown empathy and helped to restore someone’s dignity.

Andy showed the world he is stronger than most. He endured a cruel and unfair experience, but once he spoke out he was able to be shown the support he needed. He was shown that we don’t all silently accept racism.

If we are willing to take a risk, the reward of true equality is much higher. When we start showing up for each other more consistently, we will get a little bit closer to that perfect world.

To learn more about becoming a better ally, check out the free training classes at www.ihollaback.org