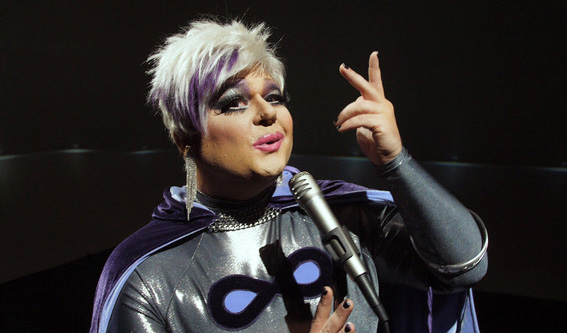 Photo above, Jeffrey R. Smith performing as his SUPERfluous character. Inset photo shows Private Eyes stars Jason Priestly and Cindy Sampson in the Beach on Balsam Avenue in a scene from the show.

Originally from St. Catharine’s, Smith is a Toronto-based actor who arrived in the city 30 years ago from the Niagara region.

“I used to look at the city line at the edge of the lake from the other side and dream about getting to the big city,” he said.

Smith said that he did his first play in Grade 12, playing the Cowardly Lion in The Wizard of Oz, and loved it. He went off to university to become a psychiatrist, but after his second year decided to audition for George Brown Theatre School and Ryerson.

“They both accepted me but I went to George Brown Theatre School for three years, and that really helped set me up. I didn’t realize how prestigious a school it was,” said Smith.

He went on to secure numerous gigs such as working at the Canadian Stage, a kid’s tour, landing commercials, and guest roles in TV and film. He also sporadically does stage performing as his SUPERfluous character.

“(SUPERfluous) came from a desire to get back on stage and do some singing, comedy, and storytelling. February 19, 2020, I had brought my character back, I did a stand-up night, and then the next month the pandemic happened,” said Smith.

He said his SUPERfluous character ties into his guest role on the finale of Private Eyes.

“I do play a drag role on the final episode and they were looking for someone who had drag experience, so me putting effort into my own SUPERfluous character got me the audition for the guest star of the Private Eyes finale,” he said.

Smith said that he did most of his work for the episode in-studio on the east side of Victoria Park Avenue.

“It’s all set in Toronto, that’s something I love about it…they don’t hide Toronto at all. They show everywhere in the city as it is…you see landmarks all the time,” said Smith. In past episodes, Private Eyes has made great use of Toronto neighbourhoods such as the Beach and Leslieville, creating a fanbase that loves identifying the locations that pop up in each episode.

“To do this role on the anniversary of me choosing to chase my dream…it feels like a good full-circle moment,” Smith said.

He said he’s happy and proud the episode is promoting The Rainbow Railroad, a global not-for-profit organization founded in Toronto that helps LGBTQI+ people find safety, often by moving them across borders.

“The Rainbow Railroad is an organization that helps save queer people around the world who are in dangerous situations…it makes me proud… to be able to help promote that,” he said.

To see an earlier story by Beach Metro News identifying some of the East Toronto locations frequently used in Private Eyes, please see our story at https://beachmetro.com/2016/07/21/private-eyes-theyre-watching/