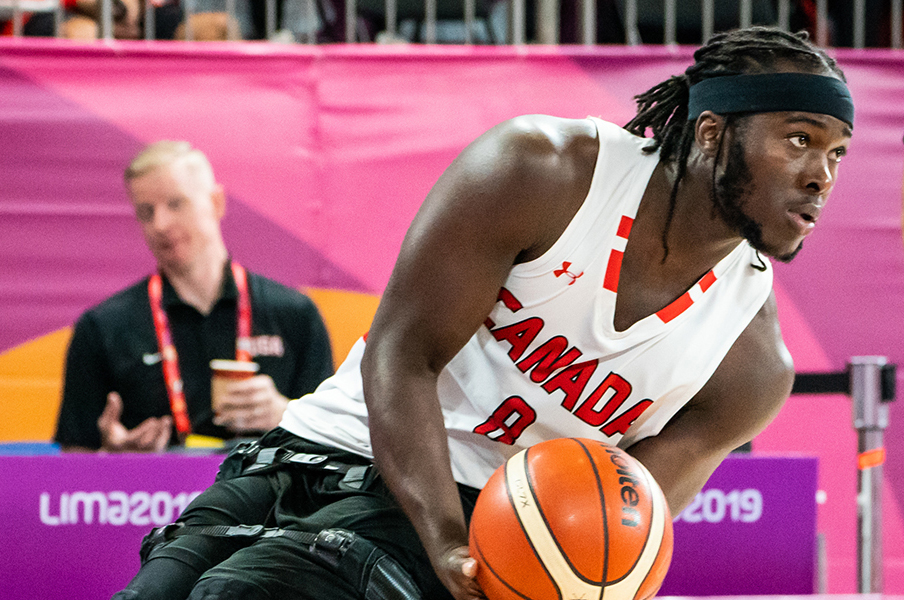 Athletes all over Canada are preparing for the Tokyo Paralympic Games that open on Tuesday, Aug. 24.

Two athletes with connections to southwest Scarborough’s Variety Village will be members of the Canadian men’s wheelchair basketball team at the upcoming Paralympics.

Born in Rwanda, Mutware also lived in Zimbabwe and Namibia as a child. At the age of 13, he moved to Canada with his family and they settled in Etobicoke.

Mutware always had a passion for sports. He played soccer for the first half of his life. Mutware said he would have continued pursuing the sport were it not for Canada’s cold winters.

“During the winter months I had to find a new sport to play and basketball just kind of caught my attention and became a passion of mine since I was like 13,” Mutware said in a recent interview with Beach Metro News.

When Mutware was 20 he was confronted by two robbers and an altercation took place in which he was shot five times. Some of the shots hit his spine, leaving him unable to walk. Mutware recovered enough to use a wheelchair.

To help him cope with his new situation, his therapist introduced him to wheelchair basketball coach Steve Bialowas. The encounter gave Mutware the opportunity to try out and learn how to play the game.

“With wheelchair basketball, a majority of the game relies on the wheelchair and how you can maneuver around,” Mutware said. “If you can’t move your chair, it’s hard to be successful.”

He learned the basics of the sport at Variety Village. “When I first started, I didn’t know much about wheelchair basketball and I was not very good at all. But with Variety Village, I was able to work on the things I was not good at,” Mutware said.

He debuted as a player with the Variety Village Rebels in 2015. His performance warranted him an invitation to train with the National Academy Program at Wheelchair Basketball Canada’s National Training Centre before that year’s end.

During the 2019 Parapan American Games, Mutware was a member of the Canadian team that won the silver medal. It was his first year with the national team and a moment where he felt he belonged, Mutware said.

Training for the Paralympics has been a full time commitment for Mutware. Five days a week is spent to keep in shape,  including core workouts, weight lifting, and shooting practice.

Mutware departed from the Variety Village Rebels team after a year as the combination of national training and work made it impossible to schedule time. He now trains at the Toronto Pan Am Sports Centre in east Scarborough, but Variety Village remains a special place for him.

“Variety Village is where I was able to learn the game without worrying about being embarrassed or anything,” Mutware said. “I guess it was my training wheels in a way.”

Following the Tokyo Games, Mutware plans to continue his education at the University of Arizona.

Melymick will be playing on the Canadian team in Tokyo as well this month.

A workplace accident in 2015 confined Melymick to a wheelchair. He embraced wheelchair basketball after the incident. Before then, Melymick played baseball regularly at Ryerson and intermittently played basketball with Etobicoke Thunder.

“It [wheelchair basketball] was like the first sport I jumped into after figuring out that there was a wheelchair adaptable version,” Melymick said. Wheelchair basketball was different than able-bodied basketball to Melymick. He found that maneuverability depended almost exclusively on his arms. Being able to balance the stress of sprinting with a wheelchair and shooting was a challenge.

Strategy was also different in the game as the lack of maneuverability can leave players vulnerable to being blocked by opposing players.

“It’s like a game of chess where you’re putting the pieces of your fighters to open up the best shot opportunity,” Melymick said.

Etobicoke lacked the facilities to accommodate him, so for Melymick the closest option proved to be Variety Village. He was impressed with the number of resources available there for wheelchair basketball players.

Equipment was already available, allowing anyone to try the sport without worrying about the financial cost.

Though Mutware and Melymick have both played for the Variety Village Rebels team, they have not done so at the same time.

Melymick said COVID-19 slowed training down last year, but restrictions have eased since then and the national team has been working hard in preparation for Tokyo.

After the Paralympics, Melymick plans on returning home to Toronto where he will be taking a couple of courses at Ryerson for his degree.

The Canadian men’s wheelchair basketball team will be competing against 11 other teams at the Tokyo Paralympics. Canada’s first game is slated to take place on Aug. 26 against Spain.