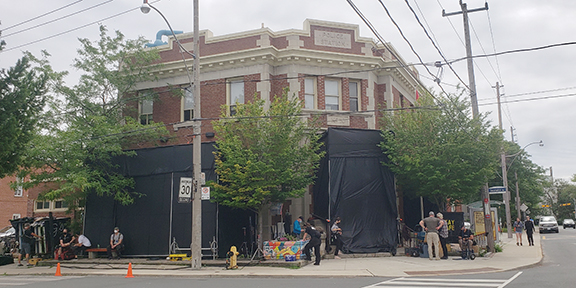 Filming for The Marsh King's Daughter takes place at Community Centre 55 on Main Street in July. Photo by Bernie Fletcher. Inset image shows the cover of the book by Karen Dionne.

Despite the COVID-19 pandemic, it’s been a busy summer for film production in Toronto. Besides the usual superhero fantasies, cameras rolled on some serious dramas about brave women confronting past abuse.

Most of the psychological thriller The Marsh King’s Daughter takes place in the wilderness, but scenes were filmed last month at Kimberley School and Community Centre 55 (formerly Police Station #10 and #55) on Main Street.

Daisy Ridley plays Helena who is leading a seemingly normal life until shocking events bring dark secrets back to the surface. The story is told in two time frames, the present and a period 15 years before at a time when the infamous “Marsh King” held Helena and her mother captive in the wild marshes of Michigan’s Upper Peninsula.

Now a mother herself, Helena is forced to confront her past…and her father. Her early life was a lie: “I didn’t know we were captives until we were not.” While the title of the bestselling 2017 novel from Karen Dionne is taken from a fairy tale, the narrative that Helena tells is disturbing and far from a breezy summer read. I just finished the book, but I won’t give away any secrets. Ever read a novel and wonder how the movie adaptation would unfold?

Author Dionne is thrilled to see her story come to life: “I’ve read the script and I love it. Can’t wait to see how it translates to the screen. It still doesn’t seem real. I’m still pinching myself.” She tweets, “This is going to be amazing! I love seeing pics from the set…so cool. Yes, Michigan and Ontario have a lot of similarities…it adds so much to the story when readers are able to bring their personal knowledge and experience to the book.”

The film shoot wrapped on Aug. 6 after filming in the wilds of the French River area near North Bay as well as in Alliston, Mississauga, Caledon, Kawartha Lakes north of Lindsay, Kingston Pen, Lake Simcoe and Toronto. The filmmakers thanked the Dokis First Nation for transporting crew and equipment across lakes, rivers and bush to remote locations.

Dionne tweeted that seeing photos from the shoot, “gives me shivers! This is going to be such a gorgeous film.”

The young Helena is played by 11-year old Brooklynn Prince, the precocious kid Moonee from The Florida Project (2017).

The scene filmed at Kimberley P.S. involves Helena getting off a school bus with news trucks around.

I’m guessing Community Centre 55 plays an old-style police station with extras in sheriff deputy uniforms and vintage police cars. Helena is accompanied by her mother out of the station into a throng of photographers.

The story echoes actual abductions, but author Dionne says the book was not inspired by any real event. Is our fascination with true crime unhealthy?

Helena (Daisy Ridley of Star Wars fame) has no Jedi powers or light sabres. She has to be her own hero. In each of these films there isn’t any “knight in shining armour” coming to rescue the “damsel in distress”, no Prince Charming or Liam Neeson.

The women show resilience by facing their trauma and taking matters into their own hands. We will have to wait until next year to see what happens. Watch for at least one of these films to premiere at TIFF 2022. Let’s hope life returns to normal by then…fingers crossed and shots in arms.