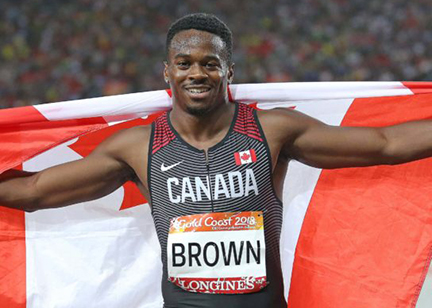 Aaron Brown, shown in this Athletics Canada file photo, has won a bronze medal as a member of the Canadian men’s 4x100-metre relay race team at the Tokyo Olympics. Photo: Athletics Canada.

The race took place at 9:50 a.m. Toronto time on Friday, Aug. 6 in The National Stadium in Tokyo.

Brown, 29, is a member of the Canadian men’s relay team that also included Andre De Grasse (winner of the gold in the men’s 200m and bronze in the men’s 100m races at the Tokyo Games), Brendon Rodney, and Jerome Blake.

Brown ran the first leg of the race, and De Grasse ran the anchor.

These are Brown’s second Olympics as he also took part in the Rio Games in 2016.

In Tokyo, Brown finished sixth in the final of the men’s 200m race which was won by his teammate De Grasse. In the race, Brown ran a personal best time of 20.20. In the semifinal he ran a time of 19.19.

It was the first time since the 1928 Games in Amesterdam that two Canadians ran in the Olympic final of the 200m race. In 1928, Percy Williams won gold for Canada and his teammate John Fitzpatrick was fifth.

In Rio, Brown was also a member of the Canadian men’s 4x100m relay team that won the bronze medal.

Brown grew up in the Upper Beach and attended elementary school at Bowmore Road. He then attended Birchmount Park Collegiate Institute where he was a star athlete in both track and football.

After high school, Brown went to the University of Southern California on a track scholarship.