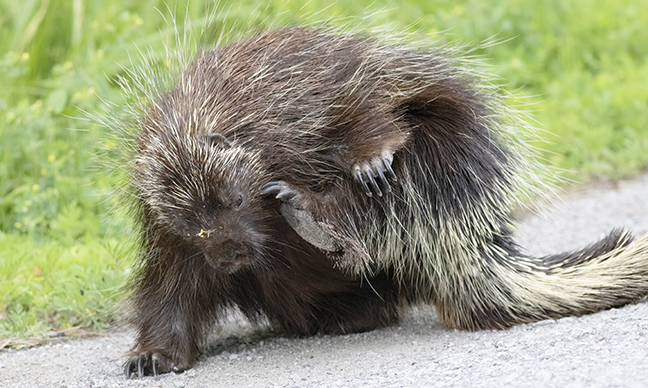 A few years back, I was filling up one of the bird feeders in my front yard when a neighbour, who was out for a walk, told me there was a strange animal up in a tree just down the road.

I, obviously, grabbed my camera and took off in the direction she pointed! It took a few minutes to find the spot, but only a moment to spot the animal up in a big poplar tree. I realized that, after all the years I have lived in Toronto, this was the first porcupine I had ever seen in the city.

If you are wondering what it was doing in a tree, it was happily having some lunch. Thanks to their ability to climb, unlike their cousin the beaver, porcupines do not need to take down trees to eat their fill of bark, twigs, and leaves. Like their cousin, apparently porcupines can swim! This is something that I dearly hope to see one day.

Now let’s jump ahead to the other day when I was on my way home from volunteering at a wildlife centre. What do I see walking along a back road? Yes! A beautiful, silver headed porcupine.

Porcupines are vegetarians and they enjoy leaves, apples, plants, bark, twigs, and many other greens. Very, very rarely they have been known to defy their herbivore status and will snack on a dead animal. This fellow was an extremely slow walker, so I had plenty of time to observe him and take photos. A few cars pulled over as well and we all enjoyed watching him together.

What’s always impressed me about these creatures are their quills. How did this particular line of defense evolve? After doing some reading, I learned that the average porcupine has approximately 30,000 quills, spread out over their back and tail.

While some people may be afraid to go anywhere near a porcupine because they think they can shoot their quills, this is actually just a widely held bit of misinformation. I think that because most predators would run up, impale themselves or get hit by a swinging tail and then retreat even faster than they approached, it might appear to an observer that the porcupine had actually thrown the quills. The quills themselves have a barbed tip which makes them painful to remove. A long time ago, before I lived in Toronto, I had sadly seen my own dogs come back to the house with a mouth full of quills. A trip to the vet was needed to get them all out.

A couple of cool facts about porcupines: A baby porcupine is called a porcupette, they are a mammal, from the rodent family, and there are 23 different species, still alive, that are broken into old world and new world families.

Also, porcupines are known to do a dance, possibly for mating, where they rise on their back legs and shuffle and stomp from side to side while their arms swing back and forth. It is one of the cutest things I’ve ever seen!

And, last but certainly not least, porcupines have antibiotics in their quills. There are a couple theories about why this is, one being that they tend to be a bit on the fat side and, as a result, occasionally fall out of trees and poke themselves with their own quills! The antibiotics counter these awkwardly self-inflicted wounds.

What an amazing creature to have living around us!