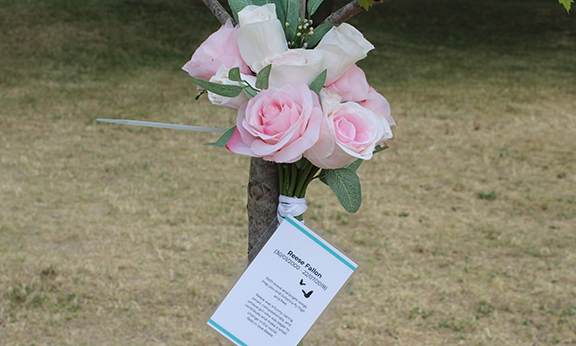 Flowers and a tribute remembering Reese Fallon were placed on her memorial tree in Withrow Park in July of 2020 to mark the second anniversary of the Danforth Shooting. The third anniversary is on July 22, 2021.

Two trees stand in the north end of Withrow Park, near the corner of McConnell and Carlaw avenues, as a tribute and as a reminder. I am personally glad that the city planted them; however, they are no substitute for the lives they represent.

On July 22, 2021, three years will have passed since a young girl and a teenage woman were murdered, 13 others were shot, and countless others were terrorized in a seemingly random act of violence on the Danforth.

The Toronto police report suggests that about 10 minutes elapsed from the time that the first shots were fired at Alexander the Great Parkette at Logan Avenue, until the murderer took his own life on the sidewalk at Danforth Avenue and Bowden Street, with a stolen Smith & Wesson MP40.

My wife, Claire, and I learned about the shooting from a doctor, who like so many people that summer evening, was enjoying dinner at a restaurant until the shots started.

My daughter, Samantha, was with a group of friends targeted by the shooter. She was shot in the hip.

Samantha managed to escape further injury by the gunman and she limped to that restaurant. The doctor called my number on Samantha’s iPhone and she told me what was happening to the best of her ability, saying that my daughter was hurt but ambulances were arriving and Sam would likely be OK.

But the situation was chaos, and I could not go to my daughter. I did not know for a few hours where Sam would be taken for treatment or what had happened to the other seven friends that Samantha was with that night.

It took until the next day to learn, while we were at St. Michael’s Hospital, of the extent of the menace, that two lives were lost including 10-year-old Julianna Kozis and Samantha’s close friend Reese Fallon, 18.

This tragedy was, and remains, a total shock to our family, to the other families, and as I came to know, to many in the Danforth Community and across the country.

This is a grim story to recount every July 22. But many of us who were involved feel the need to do so.

One reason to do so is that talking about this horrific event helps to deal with it. We have learned that you do not forget. You accept that it happened and you live with it.

Acknowledging the shock and finding others who feel the same loss and hurt helps to develop a strategy for dealing with it.

Talking about these events also lets us remember the survivors and the after-effects.

It is a tragedy in this city that often victims are left on their own. They are not supported as we were. This is an issue to which we must pay more attention across Toronto – the supports for those who are left to pick up the pieces. The cost of gun violence is understated, as we have come to learn, and we must help survivors and their families.

In the case of the Danforth families, though, this anniversary and all that follow is our chance to thank the many who helped us. From the impressive impromptu vigil created at Alexander the Great Parkette and attended by thousands, to the concert organized by the band Billy Talent with the help of the Danforth Music Hall and the Danforth and Greektown BIA, to the Go Fund Me page that Keiley Routledge, her husband Brian, and her daughter Stephanie Abbat-Slater organized, to funds raised later that summer through a Danforth Community garage sale organized by Danforth residents Tilly Gray and Maya Fitzpatrick. So many to thank and I know this list is incomplete.

Reese has had tribute paid to her at Malvern Collegiate, her high school, through a scholarship that is awarded annually to a person seeking to enter health sciences, as Reese had planned to do. Reese’s friends and family honour her in so may other ways, too, and the symbol of enduring love for Reese is a blue butterfly – as the butterfly wings are similar to the wings of an angel, and that is the way we certainly think of Reese going forward.

Likewise, the incredibly brave Kozis family started a foundation called Just Do Kindness to honour the other angel taken that day, Julianna.

In the intervening time, some of the families affected by the July 22 event, created a grassroots group called Danforth Families for Safe Communities. We continue to advocate for changes to the laws that surround gun ownership in this country.

As we all come out of the extraordinary and draining effects of the pandemic, we can, and we must, face the other issues that affect our society.

And this set of priorities must include better gun laws and enforcement, as well as programs that prevent the temptation to turn to gun violence.

But for the day of July 22, it is a chance to remember and to grieve and to reflect.

Let it be a reminder that the Danforth neighbourhood was supportive in so many ways, through so many acts of kindness. Let us remember the heroism of our First Responders and the medical community.

On July 22, we remember Reese and Julianna, and the injured, and the witnesses that were there that night on the Danforth.