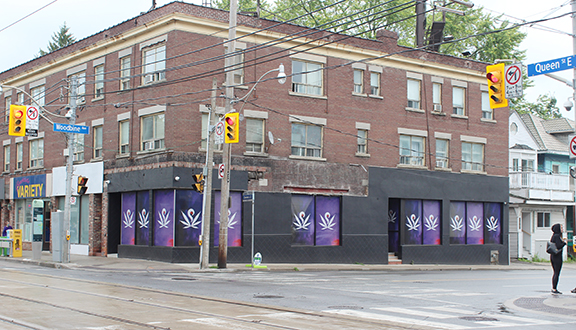 A cannabis store opening on the southeast corner of Woodbine Avenue and Queen Street East, the long-time home of a Pizza Pizza store, is raising concerns for a number of reasons.

Ryan Shanahan has lived in the Beach for almost 25 years and is concerned about the increasing number of cannabis shops opening up around him.

Specifically, he’s concerned about the proposed shop opening up at 1881 Queen St. E., where the former Pizza Pizza was at the southeast corner of Woodbine Avenue and Queen Street East.

“I’m not a cannabis user and I’m not anti-cannabis use, but I am ‘Pro Drug Free Kids’,” he told Beach Metro News in an email. “A large, in your face advertisement for cannabis use at the gateway to the Beaches community is not a daily image I want implanted into my young children’s minds.”

Shanahan was prompted to send the email after passing by the new store’s mural with his children, his 10-year-old son mistaking it for a pet store due to the giant, inviting swan in the artwork.

“That’s not a pet store, that’s a weed store,” said his 15-year-old daughter.

Shanahan’s concern hasn’t gone unnoticed by Beaches-East York Councillor Brad Bradford, but, as he pointed out in a statement from his office, there’s only so much he can do.

There are also those within the cannabis industry that are beginning to — or long have — questioned the policies surrounding the operation of these stores.

Jessica Ewert is a Beach resident herself and has worked in the cannabis industry since day one in Toronto.

Ewert’s concerned about the amount of cannabis shops opening in the area as well, but for different reasons.

“I don’t think there’s any more need for another pot shop in the Beaches or anywhere near Queen Street East,” she told Beach Metro News.

With the current laws in place, there’s very little opportunity for each shop to differentiate itself from the rest of the crowd be it through services, products, or even marketing.

Those that do manage to set themselves apart are usually met with questions about whether their approach is within the Alcohol and Gaming Commission of Ontario (AGCO) guidelines.

Ewert believes that, instead of just letting countless dispensaries open throughout every neighbourhood in the city, cannabis shops should be allowed to explore different areas of business.

“But, since it’s not, we’re all selling the same product and we all have to buy from the OCS at the same price. It’s turned into, basically, a price slashing contest,” she said.

The saturation of the market has pushed prices right down.

“[They’ve] now changed their entire format to ‘value bud,’ Their whole niche is to sell rock bottom prices because they’re owned by a large corporation which gives them the financing to undercut any other private or small independent business,” she said.

“If you’re next to one of these value bud stores, you’re really in trouble.”

In this way, Shanahan and Ewert essentially share the same vision: a more focussed approach to the cannabis shop roll out; quality over quantity.

The question is whether or not something will be done before the issue gets out of hand.

“It has nothing to do with whether or not we think cannabis should be legal or not — it certainly should be — but everything to do with how we make sure our main streets can stay vibrant and interesting places to visit,” Bradford said in his statement.

“We don’t want other kinds of businesses to get squeezed out by high rents from stores that may or may not last too long into the future. Given the amount of stores opening, you have to wonder how many will be able to survive.”