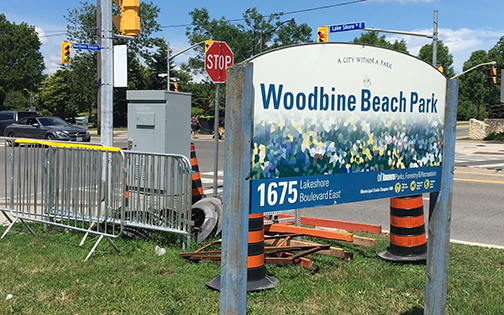 Police were called to the area of Lake Shore Boulevard East and Northern Dancer Boulevard at approximately 12:30 a.m. on July 2 for reports of a fight that had broken out between people shooting fireworks at each other. When police arrived they found two people who had been stabbed.

Two people were injured in a stabbing north of Woodbine Beach Park in the early hours of Thursday, July 2.

Police said on Twitter they were called to the area of Lake Shore Boulevard East and Northern Dancer Boulevard at approximately 12:30 a.m. for reports of a fight that had broken out between people shooting fireworks at each other.

When police arrived they found two people who had been stabbed.

One person was taken to hospital with non-life threatening injuries. The other person was treated at the scene. No information on the age or gender of the victims has been disclosed.

“It has become terrifying most weekends in the beach area, particularly anywhere near Ashbridges Bay Park and now even on weekdays it is out of control,” Murphy said in an email sent to Beach Metro News and other media on the morning of July 2.

“What is being done to resolve this worsening health and safety issue?”

The ongoing incidents are also cause for concern for city officials. Beaches-East York Councillor Brad Bradford said recently that it’s sad such behaviour is harming the chance for others to enjoy the local beaches and parks. (To see more on this, read our earlier story at https://beachmetro.com/2021/06/30/city-officials-working-to-make-safety-a-priority-at-toronto-beaches-and-parks-over-the-canada-day-holiday-and-weekend/ )

“The smell of marijuana and smoke floating in from the beach fires is horrific and is now a regular weekend occurrence,” Murphy said in his email.

This morning’s stabbing comes on the heels of earlier violent incidents in the area involving large crowds and the shooting of fireworks at people and buildings.

The Victoria Day long weekend saw massive crowds gathering in the evening and at night in the Woodbine Beach area. They were setting off fireworks and shooting them at each other into the early morning hours.

On the night of Saturday, June 12, a 16-year-old boy was stabbed after a confrontation regarding the shooting of fireworks at people near Ashbridges Bay Park. A 24-year-old St. Catharines man was charged with attempted murder in that incident. Police also charged two 16-year-old boys with assault with a weapon.