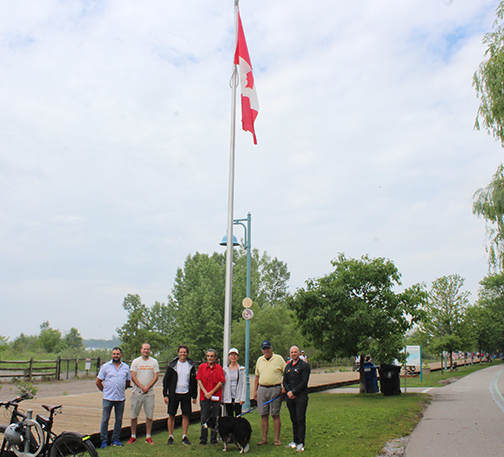 The Beach now has a flag pole at the south end of Kew Gardens between the Martin Goodman Trail and the Boardwalk.

It is located in front of Beaches N’ Cream restaurant, and its installation was led by owner Isaac Jamshidy and local historian Gene Domagala.

Jamshidy came to Canada from Iran 33 years ago, and has lived in Leslieville for the last 20 years.

For the past seven years he has been running Beaches N’ Cream near the Boardwalk.

“I wanted to give something to my adopted country and the people of this community so they can be proud,” he said.

“Whenever you go into the United States there are flags flying everywhere, and now the flag will be flying here. This flag pole makes me unbelievably happy. I’m so proud it is here. This is the best thing for the flag pole to be here.”

In his remarks at the ceremony, Domagala pointed out that the east-west route along the shores of Lake Ontario that is followed by both the Boardwalk and the Martin Goodman Trail was originally a traditional trail used by Indigenous peoples.

Both Erskine-Smith and Bradford said that Canada Day this year must be a time for remembrance of and reflection on how this country treats its Indigenous peoples.

“We need to reflect on the shameful parts of our history and do better,” said Erskine-Smith.

Bradford said Canadians should make time to think about our country’s history on July 1.

“We must do some deep reflection. It is a reckoning, and we must recognize these atrocities of the past,” he said.