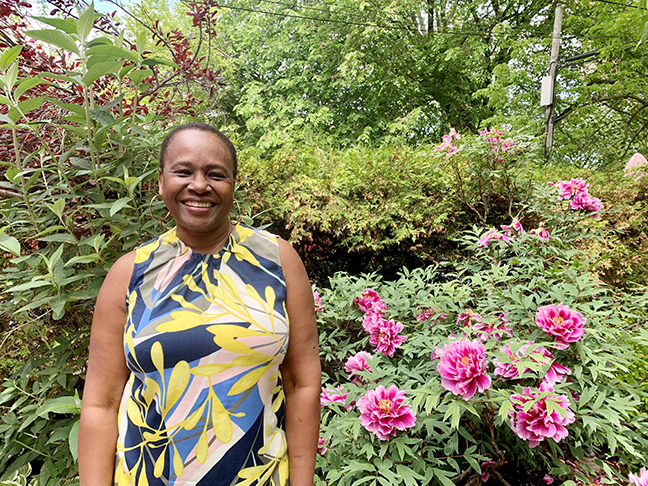 Many people of various cultures and religions may not recognize it, but they live with generational trauma. Generational trauma starts with an event, and then over decades, the pain, coping mechanisms, and ways of seeing the world, get passed down to the next generation.

As kids, most of us didn’t think of our parents as complex individuals with complicated histories; they were just our parents, they made the rules, set bedtimes, and occasionally rewarded us for good behaviour.

Nella Cramer, who was born in Barbados, is a long-time Beach resident and parent. She has done, and is still doing the complicated work of raising two strong, beautiful young women with her husband Paul.

Though their daughters are technically adults, the work and emotional discoveries of parenthood never stop. Luckily for her family, Nella is also a Reiki Master and a Registered Nurse and she is well practiced in caring for their energy and well-being.

But like all of us, she carries her own history in her heart, and that’s not always easy to navigate.

“My childhood wasn’t ‘normal,’” Nella told me. “My mother left and went to England when I was 22 months old. She never came back.”

Nella was raised by her grandmother who took on the role of sole parent. Her grandmother had diabetes; as Nella grew older and the diabetes progressed, the roles reversed, and she became responsible for caring for the older woman. “She lost her legs to diabetes and eventually died when I was around 18 years old.”

Nella had been working for a doctor as his secretary after school and after seeing the way she cared for her grandmother, he suggested she look into nursing as a career. But when her grandmother died, her uncle who was living in Toronto sponsored her to come Canada. So in 1980, much to Nella’s surprise she arrived in the middle of her first winter.

“It was a shock to my system. I cried for months,” she chuckled as she recalled that freezing cold winter.

Those first three years Nella lived with her cousin in a small apartment and was nanny to their kids. “Despite the fact that we were poor in Barbados, everyone had a house. So, it was hard for me living in this space. I felt so confined.”

Eventually Nella moved on and nannied for another family in Scarborough. “They became my family, and we are still very close to this day,” she said.

After this period, Nella went back to school. She started her career as a Registered Nurse’s Assistant but ultimately decided to become a full-fledged RN. She met Paul while in nursing school and after a couple of years moved to the Beach in 1990.

“My first impression of the Beach was that it’s a beautiful neighbourhood. Most of my experiences here have been good,” she said, though she did reveal a handful of ugly events that were of varying degrees of racism.

“I believe that because I go into places with an open mind and I support local businesses, people have gotten to know me. I came in with my heart and showed people who I am. I feel good walking down Queen Street, but sometimes when I sit back and think about it, I feel tired. I worked hard being the only Black person for a long time.”

This sentiment really hits home. Many Black people, myself included, work hard at being likeable. We overcompensate for the negative impressions and preconceived ideas most of society denies even having.

Because like Nella said, we’ve worked hard, it means even when something inappropriate is said, we are caught off guard and don’t want to risk shaking up the relationships we’ve built. But what if the people you’re trying to convince are supposed to be family?

Nella’s husband’s white family wasn’t as receptive to her at the start of their relationship. When I asked how she handled it she said, “I was sweet as pie. I was myself and in the end his father was closer to us than most other people in the family.”

When it was time for her older daughter to go to high school, she chose Birchmount Park Collegiate thinking it would be more diverse and that she would have a better sense of her Black history.
Unfortunately, Nella told me, “It was the opposite. We found out she was being bullied, but not by the white kids. The school was so divided, she didn’t fit in anywhere. The Black kids didn’t think she was Black enough.”

“I didn’t know how to address it. I felt really bad that I did not embrace my own culture more,” she added.

“I think I came into this society with rose-coloured glasses. I didn’t teach my kids about their history. We would go to Barbados every year, but I didn’t do any research or share my history with the girls. I wish I had made it more of a priority to teach them and show them how to support their Black culture, to show them more people that looked like them. I still have a lot of heartache over that. Every Christmas I would take them to get their hair straightened. I didn’t think much about it until now, looking back on it, I think ‘Oh my god, they wanted to look like their (white) friends. They didn’t have any Black friends.’”

Both of Nella’s daughters now live in London, England and have fully embraced their Black history and culture.

Through her daughters she has begun to unpack her own history.

“My daughter asked me to write about my life, she didn’t want anything else for her birthday. So, though I’m sad I didn’t get my kids more involved with their Black side when they were young, we are talking and sharing in this experience now,” she said.

You can hear the pride in Nella’s voice as she talks about her daughters and their dedication to discovering who they are and where they came from. The talks they have now, and this process of learning and accepting the past are the key to breaking free from the generational trauma.

The pain in Nella’s past didn’t start with Nella. It started with the millions of Africans that were brought over on slave ships to work for nothing on sugar plantations. It continued on through the “official” end of slavery and passed on the mental and emotional scars into the new era of independence.

For centuries Black people were treated no better than livestock, their position in society improving in excruciatingly small increments. This is not just “history,” this is the foundation of people’s lives, their understanding of the world and the value that is placed on them as human beings. When survival is at stake, when you are not shown love from your fellow man, it’s hard to be your best for anyone.

Of course people falter, but when you open your eyes to the whole journey, it is easier to understand who someone is and how they got there.

For Nella, at 62 years old, she is still working on reflecting upon her past and forgiving herself and those before her in order to move forward with her daughters, the next generation, to a more informed and authentic future.