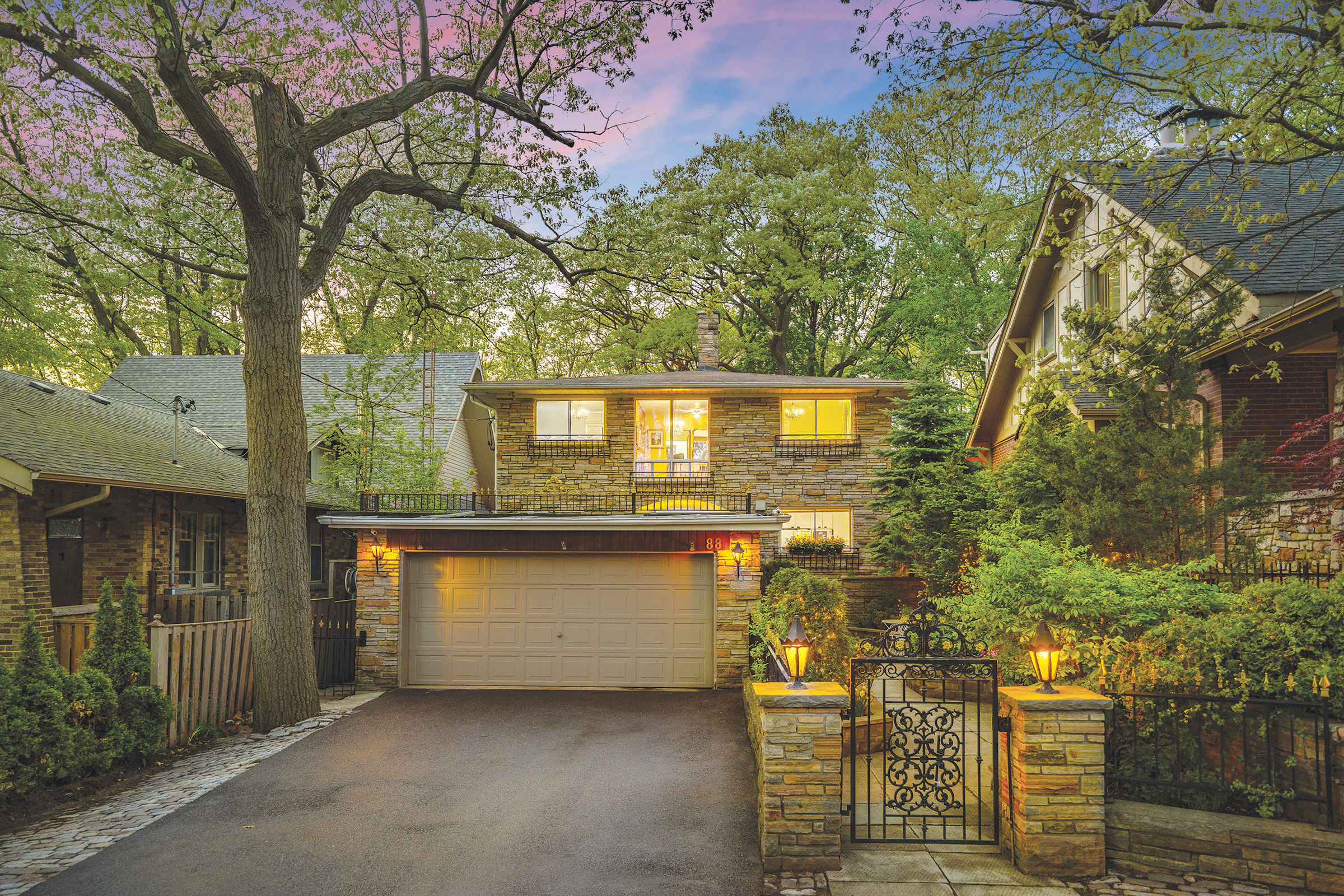 Photo above shows the front of The Bundy House at 88 Pine Crescent. Inset photo shows a view from the huge backyard that is on the Glen Stewart Ravine.

A Beach home that for decades was one of the centres of the community’s social life is being remembered fondly by those who lived there and those who visited.

“It was a house that was alive and always open to the neighbourhood and kids growing up,” said Claire-Anne Bundy of the house she grew up in with her family at 88 Pine Crescent.

The Bundy House is now being listed for sale by local realtor Shea Warrington and Harris Bundy (who is a grandson of the home’s owners – Trudy and Robert Bundy).

Built by Robert Bundy in 1963, the home sits on a massive 250-foot deep lot backing onto the Glen Stewart Ravine.

“It’s an unbelievably rare property,’ said Warrington. “I’ve never been in a house quite like this. There is so much history here.”

Robert Bundy had deep roots in East Toronto, attending Duke of Connaught elementary school and then Riverdale Collegiate, and he was an extremely proud Toronto resident. He served the city in roles as parks commissioner and as head of the parking department.

His wife Trudy’s story is also a remarkable one as she was born in Germany, survived the Second World War and then lived with a family in England before coming to Canada.

Robert Bundy’s obituary in the Globe and Mail from 2017 said he was “a man who knew how to get things done,” according to former Toronto mayor John Sewell.

A Royal Canadian Navy veteran who served in the Second World War, he was decorated twice by Russia for his role in Murmansk convoys and also received the Burma Star and Atlantic Star medals.

Waltraud ‘Trudy” Bundy died in September of 2020 and was remembered as not just the “life of the party” (of which she hosted many) but also a woman dedicated to helping others and giving back to her community.

She grew up in Hamburg, and her father spent the Second World War interned at Fort Henry in Kingston, Ontario, held as a non-combat prisoner as he was a member of the German merchant marine when the war broke out. Trudy survived turberculosis and temporary blindness as child. After the war, she was billeted with a family in England where she came to love English life. Her father also told her what a wonderful country Canada was based on his time in Kingston, so she soon decided to make Toronto her home.

Given their experiences, Robert and Trudy knew the value of life and the importance of enjoying it.

They made their home on Pine Crescent a place of parties, socializing, entertaining, friends and family time.

“They were so proud of the city,” said Claire-Anne. “Dad grew up in the East End and knew the Beach is a jewel in the city.”

Her parents loved to show off their home to visitors, including Russian ambassadors, numerous international dignitaries, and politicians of all levels and stripes. Claire-Anne remembered a time when the Vienna State Ballet came to visit the house. “My dad wanted them to see what a house in Toronto was like. We had all the ballet troupe here being entertained,” she said.

Claire-Anne said growing up in a home backing onto the Glen Stewart Ravine was wonderful for herself and her siblings.

“Growing up we lived in that ravine, we would build forts and we had such amazing times as children. It was a beautiful wooded paradise.”

Harris Bundy also remembers the magic of the ravine and the home’s yard.

“Mostly I just remember the amazing sunny days in the backyard spent with my family and my grandmother,” he said.

“They were awesome Christmas parties. There were 70 to 100 people at them when I was young and my grandparents still had ‘pop’. It was all formal wear for the party and black tie was mandatory.”

Family friend Catherine Morrow also has many fond memories of The Bundy House.

“It’s been the scene of festive parties and formal Christmas celebrations, casual at-homes, fabulous fundraisers, innumerable birthdays and, under fairy lights in the spectacularly private and beautifully landscaped back garden, of raucous celebrations of graduations, marriages and lasting friendships.”

Claire-Anne said her hope for the purchasers of her family home on Pine Crescent is that they will create and build the same intense and wonderful memories she has of living there.

“I’m wishing they live it and embrace it and make wonderful memories as we certainly have ours,” she said.

The home is being listed at $3.288 million and will then be holding for offers.