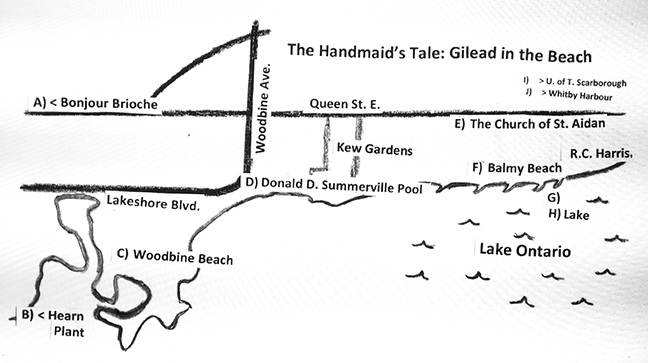 The map above shows some of the locations used in the Beach for the filming of The Handmaid’s Tale. Inset photo shows a happy flashback for June, Luke and Hannah filmed on Woodbine Beach.

The red robes and white bonnets are back. The Handmaid’s Tale began its intense fourth season (CTV Drama) with more dark and disturbing images of the Republic of Gilead.

When we first saw this adaptation of Margaret Atwood’s acclaimed 1985 novel, many thought the dystopian world it portrayed was far-fetched, including an insurrection at the U.S. Capitol in Washington.

Joseph Fiennes who plays Commander Waterford told Variety, “I couldn’t help but have a self-dialogue on the nature of and the fragility of democracy and the storming of Congress.”

The series has parallels to current world events as well as echoes of history when escaping slaves followed the Underground Railroad to freedom in Canada.

Season 4 follows June (Elisabeth Moss) as she fights back against the oppressive regime of Gilead.

After a long delay because of the pandemic, filming resumed last fall with locations in Toronto, Cambridge and Scotsdale Farm near Georgetown. Downtown Brantford and Hamilton stand in for the ruined streets of war-torn “Chicago”.

Here’s a primer on filming locations for The Handmaid’s Tale in the east end of Toronto: The Memorial Hall of the Church of St. Aidan on Silver Birch Avenue was once again used for the site of the “Re-Education Centre”.

Showrunner Bruce Miller told the Hollywood Reporter, “We had to go back to this location where the Red Centre (established to house and train the handmaids) is, which is a very particular place. All of the very practical things about COVID prompt questions like, where can we shoot? How can we get all of those people?”

The above map image shows the locations used in and around the Beach area while filming The Handmaid’s Tale:

(A) Bonjour Brioche: June and Moira jog on Queen Street East and stop for coffee. Women have their rights taken away. (C) Woodbine Beach: In a happy flashback of “the time before” June, Luke and Hannah play on the beach.

(E) The Church of St. Aidan: The auditorium and gymnasium of the Memorial Hall became the “Red Centre”.

(F) Balmy Beach: Serena Joy attempts to recuperate at her mother’s house by the “ocean.”

(G) Serena and her mother sit on a beach log and talk.

(I) U. of T. Scarborough: June is interrogated at a detention centre. She is allowed to see her daughter, but Hannah is in a glass cage.

(J) Whitby Harbour pier: Does June finally make it to freedom in Canada?

Praise be! Will life ever return to “normal”? Blessed day!