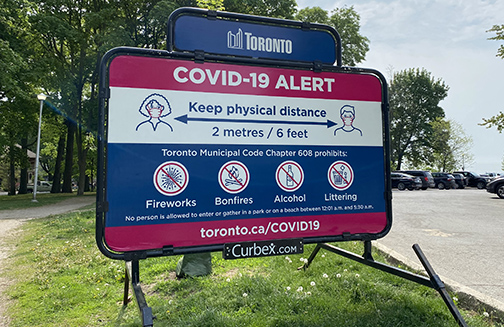 A sign warns visitors of the rules regarding behaviour along the Eastern Beaches and parks in the area.

Police and other City of Toronto departments will be working together to avoid a repeat of the behaviour that took place in and around Woodbine Beach over the Victoria Day long weekend, says the councillor representing the area.

“We’re absolutely responding to the events of last weekend. Much of this week’s work has been focused on coming up with a plan to respond to the events that are being shared on social media,” said Beaches-East York Councillor Brad Bradford on Friday, May 28, in response to questions from Beach Metro News.

“We can’t share too many details on the plan at this point given that it relates to public safety but I can confirm that Woodbine Beach and the Eastern Beaches are going to be an even bigger priority for enforcement and public safety. We’re also making arrangements for additional parking enforcement in the beach streets south of Queen Street which are already pressured with on-street parking during the summer time.”

Many of the problems were linked to a huge gathering of young people that had been promoted on social media. Earlier this week, there were notices by TikTok users promoting Andrew’s Kickback at Woodbine Beach on Saturday, May 29. The same Andrew’s Kickback had also promoted events last weekend in the area.

“After the events we saw last weekend and what we’re hearing about on social media, there’s a lot of work being done. All options are on the table including limiting access to the beach and closing it down early,” said Bradford.

In response to questions from Beach Metro News earlier this week, Toronto police said the large crowds they faced last weekend presented a number of challenges regarding enforcement and safety.

“Over the weekend officers responded to extremely large crowds in the Woodbine Beach area,” police said in a statement to Beach Metro News.

“Due to the hostility and size of the crowds, officers had to use their discretion at the time and take into account the safety of themselves, those in attendance and the wider public. Public safety is always their priority and officers managed the crowds and dispersed them. Police will continue to investigate both incidents and identify those involved.”

Police said on May 24 they encountered large crowds setting off fireworks, and that one person was taken to hospital after being hit by a firework and another person was treated for a leg injury for the same reason. Garbage was also set on fire, police said.

Bradford said police estimated there were between 5,000 to 10,000 at the beach on the past long weekend, and keeping people safe was their priority.

“There were reports of fireworks being launched at buildings and into crowds of people,” he said. “At that point, police were focused on responding to this as a public safety issue and controlling the crowds more so than complaints about noise and litter.”

Residents have been complaining this week on social media about the response of the city’s bylaw officers and police to the behaviours seen last weekend in the Woodbine Beach area.

Once the crowds were dispersed, they moved up north into the neighbourhood between Queen Street East and Lake Shore Boulevard East, east of Northern Dancer Boulevard and west of Woodbine Avenue.

“There were hundreds of kids working their way through the neighbourhood,” said one resident. “They were having fights with fireworks and shooting them at each other. There were all kinds of problems from parking to puking to garbage.”

The resident was especially unhappy at what appeared to be a lack of anticipation by city officials and police regarding the large crowds of young people planning to gather at Woodbine Beach.

Cindy Cass is with the Neighbourhood Watch in the area and also runs a Facebook page for residents of the community which she calls Pleasantville. She said she’s heard a flood of complaints from angry residents this week.

“It was appalling and disgusting what was going on,” she said of last weekend.

Cass and fellow community members are especially worried as to whether every weekend through the remainder of this spring and the coming summer is going to be the same.

She is organizing an online meeting with Councillor Bradford and police in 55 Division regarding ways in which to prevent a repeat of last weekend.

Cass said that residents love living in the neighbourhood and being so close to the beach, and they understand perfectly well that it is a busy place on warm weekends. However, what happened last weekend was unprecedented, she said.

“People can tolerate large gatherings, it happens all the time here,” she said. “It is a tourist destination on summer weekends.”

Cass pointed out that prior to the COVID-19 pandemic, Woodbine Beach and Ashbridge’s Bay Park would routinely see thousands of people turn out for fireworks displays put on by the city to celebrate both Victoria Day and Canada Day. This year and in 2020, those city displays did not take place due to COVID-19 restrictions, and Cass feels that was partially responsible for last weekend’s mayhem.

“It would have been better if there was a government run fireworks display that lasted 30 minutes and then everyone went home,” she said. “This was completely out of control and there were fireworks going on until 3:30 on Sunday and Monday morning. What went on was not typical. It was not an organized display and it was dangerous.”

Cass said she has also heard more events are being planned on TikTok and other social media, and residents are worried. She said safety solutions will need to be found, and closing off parking early, or even completely, might have to be one of them.

“There at least needs to be strong police presence in the parking lots,” she said.

Bradford said the closing of beaches and parking lots is among options on the table for the future.

“The situation last weekend got out of hand because of the size of the crowd. It was a crowd control situation which couldn’t be anticipated to the extent of the activities we saw,” he said. “What we saw last weekend was unprecedented for the area…These situations need to be managed very carefully and our police and emergency services have the right experience and training to take the right approach.”

Now that the city is more clearly aware of the organized nature of last weekend’s gathering, steps are being taken to deal with similar events in the future, Bradford said.

He added that those who organized last weekend’s gathering, and may be planning others, should be ashamed of their behaviour given the dangers it created including the increased chances of spreading COVID-19.

“The people organizing these events clearly have no sense of right or wrong. Their behaviour is ignorant and selfish,” said Bradford. “Not only are they putting others as risk but they’re risking seriously harming themselves.”

Bradford said it’s sad that such behaviours are impacting the chances for others to enjoy the beach area and the outdoors as we continue to deal with COVID-19 restrictions.

“We’re all struggling to make it through the end of the pandemic and being able to enjoy the beach is one of the few things we can all do to break the monotony and stay well. It’s a shame that the selfish and juvenile decisions of a small minority are making everyone’s life more difficult,” he said.

As part of this weekend’s plans, Toronto police issued a press release on the morning of Friday, May 28, reminding residents to avoid large gatherings as part of the province’s emergency order.

“We want people to be able to get outside and enjoy our great city in this warmer weather. However, this must be done safely and not in large crowds or groups, respecting public health advice and our fellow Torontonians,” said Insp. Matthew Moyer.

“While groups of five are permitted to meet outside, we’re aware of events planned this weekend which are not permitted. Our priority is always public safety and police will be attending these events to disrupt, disperse and lay charges when warranted,” he added.

Police said in the press release that dedicated enforcement teams will continue to respond to calls from the public for parties and gatherings, charging and dispersing people in attendance. They will also maintain patrols in hot-spot areas where incidents have happened before.