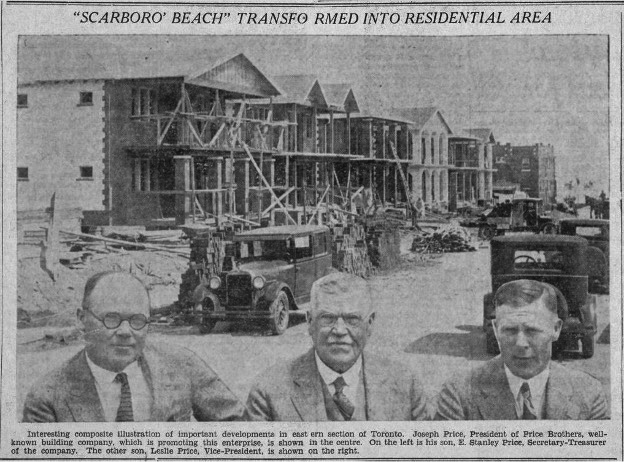 Photo above shows Joseph Price, centre, and his sons Leslie and Earl in a Globe newspaper story about the building of homes on the site of the former Scarboro Beach Amusement Park in the 1920s. Inset photo shows Joseph Price signs in a photo believed to have been taken around 1911.

It was almost 120 years ago, in 1902, that Joseph Price, his pregnant wife Lizzie, and their four children aged 16 to four, moved into their newly built home at 126 Lee Avenue.

Joe, then in his early forties, was a Toronto-born, bootstrap entrepreneur and philanthropist. He perfected his skills as a sign painter in the 1880s and, by the early 1890s, had founded what was soon the city’s most successful outdoor advertising company.

Price Advertising Co. Ltd. “own and control all Bill Boards in Toronto,” claimed an advertisement in 1896. Lizzie, born Helen Elizabeth Leslie, was a refined farm girl from near Belleville. A concert cornetist, she had soloed to cheers and encore requests at such prestigious venues as St. Andrew’s Hall, the Pavilion in the Horticultural Gardens, and Massey Hall.

She combined her musical career with raising five children – Pearl, Leslie, Earl, Helen (my grandmother), and Frances – born between 1885 and 1902.
Joe’s business model was simple but powerful.

The first step was to secure steady cash flow by renting out billboards at prime locations with high-quality, hand-painted artwork (done at their plant at the northwest corner of Main Street and Stephenson Avenue).

The second step was to use that cash flow to buy cheap local land and build economical rental housing on it.

As he put it, in a 1928 interview in the Globe, “our first building scheme was modest enough. We put up 40 houses on Lee Avenue extending over a period of ten years. That took us up till a short time before the war. In wartime we […] built farther north on Lee Avenue. We also built some stores on Queen Street and erected the Melba Theatre.”

In the 1920s, sons Leslie and Earl took on more and more responsibility for running the business, freeing their father to pursue his other passion: making the Toronto East General Hospital a reality.

He was among the small group of community leaders who lobbied the province to establish the hospital, and he was both a significant donor and a charter member of the Board of Governors.

Then, late in 1925, an opportunity came along that the family couldn’t resist. The Scarboro Beach Amusement Park went out of business. The site (stretching from Queen to the lake between today’s Wineva and Maclean avenues) was to be sold for residential development and the Prices were first in line.

They sold the billboard company and laid down most of that cash to buy up as much of the old park as they could.

Then they formed a new company, “Price Bros.,” leveraging their investment heavily with mortgage loans to build (and offer for rent) the iconic duplexes and fourplexes that are unique to the Beach.

Designed by Harry Stevens, a long-time Price employee and a self-taught architect, the buildings were constructed between 1926 and 1929.

Paul Warner will discuss “The Price Brothers and Building the Beach” on Tuesday, June 1, from 7 to 8:30 pm. at The Beach and East Toronto Historical Society event on Zoom. Details on the talk and more stories about the Price family and their development of Scarboro Beach Park are on the Society’s website at www.tbeths.com