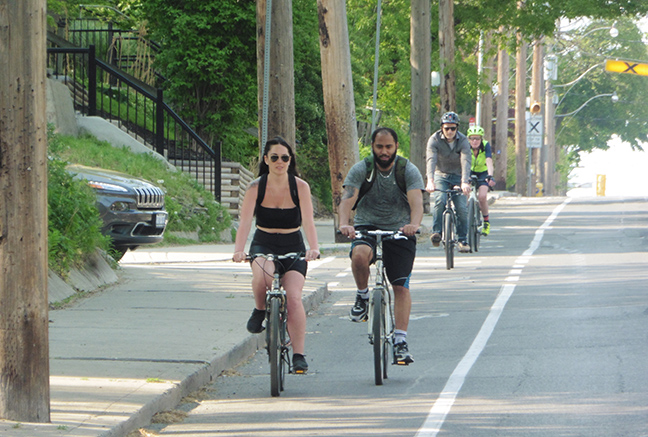 Cyclists are seen heading down the hill on Woodbine Avenue south of Gerrard Street East. Photo by Adam Smith.

The guest column below has been written in response to the In My Opinion column by Beaches-East York Councillor Brad Bradford which appeared in the May 18 edition of Beach Metro News.

The ongoing saga of the Woodbine Cycle Track continues with the latest changes put forth by Beaches-East York Councillor Brad Bradford and recently approved by Toronto Council.  This time however, city staff do not support the recommendations.

On the surface it seems like a viable plan, until you realize all the details Councillor Bradford omits in his promotion of the idea.  Slowing down Woodbine has been advocated for since the cycle track went in, and adding more physical separation to the cycle track and improving visibility of cyclists is all well and good, but the various complications and knock-on effects will make Woodbine less safe, and most importantly, it will not solve any of the problems it purports to while creating new ones:

– lack of clear sight lines through the misaligned intersection;

– increased competition for parking on side streets during the rush hour prohibition.

Councillor Bradford never mentions the crucial safety issues raised by this plan that resulted in staff not supporting it.

Just reading the staff report and the complications they raise makes it obvious the potential for disaster:   “The reduced taper and lateral shift could result in increased sideswipe and rear end collisions. Poor lane alignment, lateral shift and poor visibility of the far-side of the intersection could result in head-on collisions between southbound left-turning vehicles and northbound through vehicles. The above risks of the proposed design cannot be fully mitigated due to the constrained roadway width and topography of Woodbine Avenue north of Gerrard Street East.”

Councillor Bradford leaves out that to squeeze in a second northbound driving lane requires narrowing all the lanes, cycle track included, to the point where the northbound curb driving lane will now be narrower than a TTC bus, with other lanes precisely the width of a bus.

In the narrowest lane the buses’ mirrors will be hanging outside into the adjacent lanes.  Imagine the pinch when two buses, northbound and southbound, need to squeeze by each other in busy rush hour.

The councillor deftly omits perhaps the most unsafe change:  misaligned lanes and worsened sight lines for northbound cars as they cross Gerrard.  To accommodate two northbound lanes that will zipper together north of Gerrard requires the intentional misalignment of the driving lanes, because there is not enough room to have two lanes flow north through the intersection, and have the separated cycle track, and have a southbound left turn lane.

Compounding this problem is that Gerrard is the crest of a hill that dips immediately after crossing northbound, which means cars approaching northbound do not have a view of cars approaching southbound, and vice versa, until they are already in the intersection.  With the lanes misaligned and poor sight of approaching cars, this seems like a recipe for an accident.

It’s interesting to note that this very stretch of Woodbine is already an exception of the cycle track due to the lack of width.  Woodbine is legislated as a “cycle track”, not a “bike lane”, because only a cycle track can be on a street 50km/hr or higher.  That higher, more dangerous speed requires a cycle track to be physically separated, by a flexi-post, bollard, curb, or planter, to increase the buffer between cyclists and cars.

But Woodbine south of Gerrard doesn’t have the width for that, so southbound, where a cyclist can really pick up speed, what is merely the painted lines of an unprotected bike lane has the rules of a separated cycle track on a street 25 per cent faster.  For example, a taxi can legally block a bike lane to drop someone off, they are not technically allowed to do so in a cycle track.  Lowering Woodbine to 40 km/hr will have brought the cycle track/bike lane in line with the law, but it is yet another example of how safety concerns and regulations can be bent to the will of a councillor.

There is also the issue of the loss of parking.  While this is not a safety issue, losing street parking for three hours every weekday comes with its own annoyances, not the least of which will be that people parked on Woodbine will then compete for side street parking with residents there.

This brings us to the crux of the issue:  Side street cut-throughs by rush hour traffic.  These changes to Woodbine will not solve that issue.  That can be said with absolute certainty because the issue of cut-through traffic predates not just the installation of the cycle track, but even predates former Beaches-East York Councillor Mary-Margaret McMahon’s time in office.

So, how does opening up a second northbound lane solve a problem that existed when Woodbine was four lanes wide during rush hour?  Simply put, it won’t.

It’s no small irony that Councillor Bradford himself once quipped, “Opening up more lanes to traffic is like trying to lose weight by loosening your belt.”

And yet here he is, doing exactly that. Perhaps it is just to placate angry residents, to show them the city is trying to do something, anything, to solve the issue. Perhaps he believes this is an improvement, despite the lack of support from the experts in transportation services due to safety concerns.

The real question will be whether or not they keep the unsafe changes when they do not solve any of the problems.