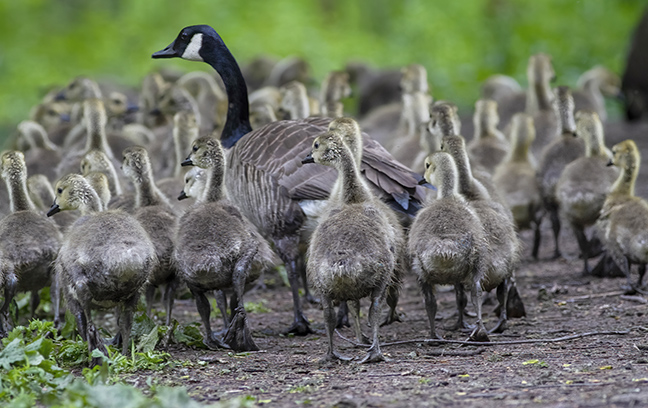 Ann Brokelman recently came upon this creche of Canadian goose goslings while on a nature walk with friend. Photos by Ann Brokelman.

I have seven grandkids, and the idea of taking care of them all in one day is panic inducing. Honestly, looking back, I don’t know how I didn’t lose any of my own three kids. How do animals do it?

I promise I’m not exaggerating, even a little, when I tell you that on one recent trip out looking for wildlife, I saw a couple adult Canada geese with more than 80 goslings under their care.

My friend and I were out walking, enjoying the sounds of nature and heading into a marshy area at the end of a dead-end path. When we walked as far as we could go, we turned around and were surprised to see a small army of Canada geese heading down the same trail towards us.

I don’t think saying “I did a double take” properly expresses my surprise. I don’t think my brain knew how to comprehend the idea that more than 80 baby geese were heading our way.

The goslings continued walking towards us which allowed me to get a better handle on what I was seeing: a pretty big mix of ages, including some new one-to-three-day- old hatchlings, some awkward looking and gangly legged teenager-equivalents, and every age in between.

My friend pointed out that there were some adults amongst them, but only four that we could see that were babysitting the whole creche. I wanted to make way for this bizarre parade, but the path had water on both sides and was very narrow. Luckily, before we had to weigh the consequences of muddy feet versus an angry adult goose, the entire gosling procession turned into the water and began to swim away from us.

The line just kept going and going and going, and we laughed because we could not believe what we were witnessing. We had no idea what had to have happened for so many goslings to be under the care of so few adults.

Well, it turns out that this phenomenon isn’t as rare as we thought. Canada geese commonly form “gang broods”, a type of creche group made up of 20 to 100 goslings. A group of adult geese, somehow, come to an agreement on who will go off to forage and who will stay behind to watch all the babies.

I assume they’ve learned that it’s the most efficient way of keeping the little ones safe while maximizing the ability of the parents to eat and stay healthy. I’d love to know how the adult geese are able to sort out which goslings are theirs at the end of the day! Can they identify their babies on sight? Smell? Sound?

Did you know that Canada geese are protected under the Migratory Act. They may be annoying and aggressive sometimes (usually?), but it is illegal to kill or injure a Canada goose, or to remove their nests without a licence.

Here are a few more interesting facts: Canada geese will migrate as far as 4,000 miles or (6,400 kilometres) in a season and regularly go as far south as Mexico. They have 13 different calls and usually nest in the same spot every year.

Have you ever noticed that when they fly in their classic V shape, one side of the V is usually longer than the other?

Do you know why that is? I’m sure a biologist will tell you it has to do with air currents and wind resistance, but my smart-alecky son just says it’s because there are more of them on that side.