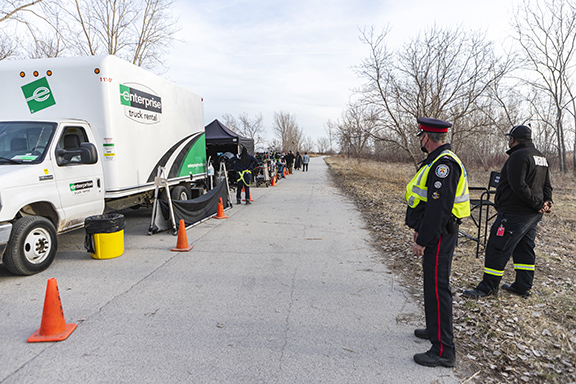 A movie shoot sets up in Tommy Thompson Park on the Leslie Street Spit earlier this year. Photo by Martin Bryan.

From the increase in bylaw infractions by visitors to high-budget filming operations, there is growing concern that one of Toronto’s only reclaimed natural habitats is being destroyed. Advocates of the Leslie Street Spit are concerned that the Toronto and Region Conservation Authority (TRCA) isn’t doing enough to uphold Tommy Thompson Park’s main objectives as a public urban wilderness.

John Carley, the co-chair of a decades-long advocacy group named Friends of the Spit, is calling for a strict no-film policy in Tommy Thompson Park.

Tommy Thompson Park currently makes up more than 250 hectares of the “accidental wilderness” atop the Spit which is assembly of completely man-made peninsulas and embayments.

The Spit is home to dozens of species of animals, including locally rare species of migratory birds.

Several entities manage the area including the TRCA, which currently runs many of the Tomm Thompson Park’s conservation efforts.

TRCA released two statements in late March in an attempt to resolve ongoing public concerns about the increase in bylaw infractions and filming after a number of complaints were issued resulting from the shooting of the Apple TV series See, starring Jason Momoa.

The first statement, addressing concerns over the enforcement of general park rules regarding the visitor-boom over the past several months, highlighted that the TRCA would increase park presence with the potential of working with Toronto police as a stand-in for their own TRCA enforcement officer’s after-hours.

In the second letter addressing the filming at Tommy Thompson Park, TRCA confirmed another scheduled filming between March 29t and March 31, stating that it would “not have an impact on the natural areas and wildlife” and that the revenue generated from the production would help address the increased need for enforcement and the operational and programming costs associated with Tommy Thompson Park.

With more than 255 visitors attending the park on the Easter long weekend, Toronto-Danforth Councillor Paula Fletcher thanked TRCA and the city for their efforts in turning away 27 dogs and their owners and immediately extinguishing two park fires during that time.

Similar concerns about crowding will also be present for this upcoming Victoria Day long weekend.

While Carley is impressed by TRCA’s approach in educating the public and enforcing park rules, he’s disappointed that the collective voices protesting the filming fell on deaf ears, saying they were “ignored” and that there was no reason the filming need to take place there.

Ralph Toninger, Associate Director, of Restorative and Resource Management at TRCA, said that 41 to 55 commercial films have been filmed on their properties within the last 10 years and each potential production goes through rigorous vetting practices.

Net revenue from productions goes directly into Tommy Thompson Park, including the construction of Cell 2 Wetland Trails, and the recovery and management efforts of native and invasive species, respectively.

“Filming has always happened there, yes it has,” said Carley. “But the scale has changed in the last half year.”

While he doesn’t have an answer as to where TRCA could substitute revenue from shooting high-production films, he wonders if the costs outweigh the benefits.

While the debate on filming at the Spit is ongoing, the TRCA and advocates of the area both agree that visitors to the area need to be following the rules of the park to maintain the natural reclamation and conservation efforts of this unique urban wilderness.