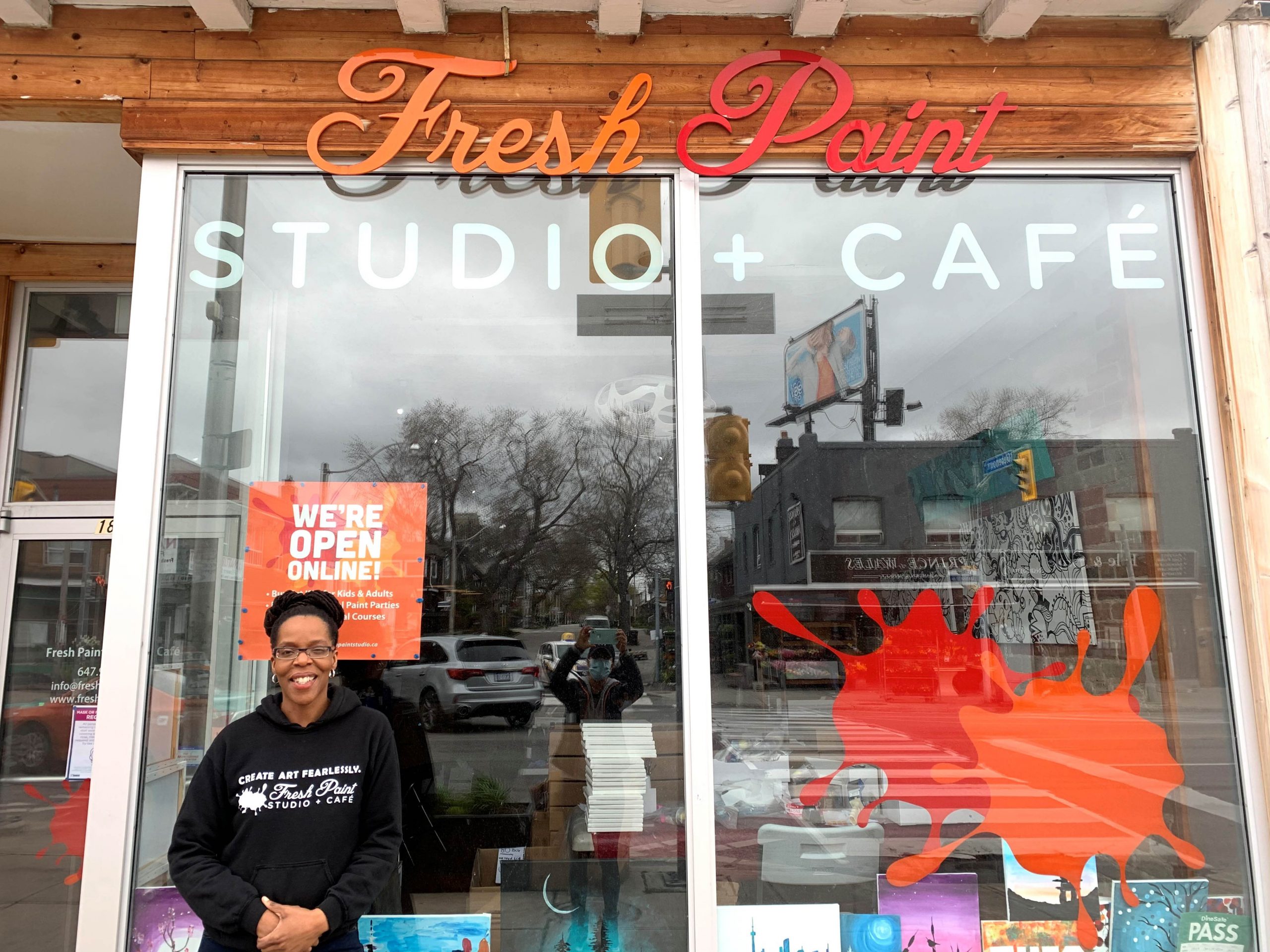 Roxane Tracey is a visual artist, poet, mother and owner of Fresh Paint Studio and Cafe on Danforth Avenue. Photo by Mimi Liliefeldt.

May 25th marks the one-year anniversary of George Floyd’s murder. Last month, Derek Chauvin was convicted on all three counts, which elicited cries of relief throughout the Black community and its supporters.

At last, if only for an all too brief moment, Black people felt seen as worthy of some kind of justice. The intensity of the last year has been simmering all along, while occasionally boiling over, and leaving us burnt out.

As a whole, and especially our Black and BIPOC folks, we need to make time for some healing and connection. Roxane Tracey is just the person we should seek out to help us simultaneously channel our emotions and break free from routine.

Roxane is a visual artist, poet, mother, and owner of Fresh Paint Studio and Cafe on Danforth Avenue just west of Woodbine Avenue.

Like many people this year, Roxane had to learn how to pivot her business.

“When the pandemic hit, it was like the carpet was pulled out from under you. At first there was the hope that it was going to just be a few months, but as it got longer it became clear we had to figure out a different path. Like many others we were asking ourselves, ‘what’s possible?’ I didn’t have the answers, but I knew I had to try.”

Eventually someone asked Roxane to host a virtual paint party, and though she didn’t know how the logistics were going to work, she said, ‘yes.’

Gradually the work and requests started to pick up and Roxane noticed a theme that was emerging. “People have to connect, they needed to figure out a way and art became an accessible way to do that. I think without realizing it that was always what I wanted my studio to be about, people connecting through art,” she said.

“It’s so beautiful to see people excited about being creative. They are able to focus on the art and at least for a few hours, forget about everything else.“

Roxane has been an artist as long as she can remember; but well before she opened her studio, she was connecting with and helping people.

For her first job, she was in Ghana for six months. “I was working on adult literacy programs and children’s art programs in libraries and schools. It was an amazing and life-changing opportunity to be on the ground and do work in communities that was meaningful.”

Her experiences in Africa forever connected Roxane to its people, her roots, and the importance of community.

In Ghana, she lived with a local woman and her two daughters who over time became like family to her. “I remember being in the community and people looked out for me, they saw me as a daughter, as a sister, as an auntie,” Roxane told me.

“I felt like I had a purpose and a place there. The people in the community were so genuinely welcoming. I looked around and I saw things that really impacted me. People went without access to basic things, and I couldn’t disconnect from it. It wasn’t like hearing about it on the news. Their experiences became a part of me. Their experiences were humanized.”

After her time in Ghana, Roxane returned to Canada and found another NGO called CPAR (Canadian Physicians for Aid and Relief) where she worked for 10 years on projects in East Africa and South Africa.

At the end of her time with CPAR, she became pregnant and knew it was time to shift gears and launch her dream of opening her studio.

Finding the space and renovating it to suit her needs took time, but it was time needed to research and shape her vision. By February 2016, Roxane opened the doors to the studio and welcomed the community in.

She spoke passionately about her intention for the studio.

“I wanted to create a space that pulled in elements of myself and my artwork, but that was also warm and inviting. Adding the café was part of creating the warmth,” said Roxane. “People have a lot of fear around art. Most adults haven’t done it since elementary school. I wanted a space to help them break down the barriers and learn to enjoy the creative process.”

Marginalized people have used art to break down barriers and amplify their voices throughout history. Famous artists from Ai Weiwei to Jean Michel Basquiat have popularized this movement of uprising through art.

But really this idea has been with humanity for centuries, possibly even more so in the Black experience as a way to process oppression and channel emotion through song, art, and dance.

“We speak through art. It’s very much a platform for Black people who are artistically inclined to express themselves and what they’re feeling,” said Roxane.

She has worked with many organizations as a facilitator to help people work through their experiences.

“I’ve used poetry and art in places like Women’s Health In Women’s Hands, where women were working through difficult situations such as mental health and abuse, as a form of healing and expression. Inspiring them to speak through their art helps them move through their journey. Making them feel like their words and images, are relevant and allowing them space to give voice to the things that are buried; it’s very powerful.”

Roxane is a special person, who has cast her community net wide.

She is motivated by using her poetry and art to inspire others and especially uplift women. She has taken what she knows about the human experience, with all our joy and pain and made it her mission to give back.

“We all have a creative soul, there are many ways to be creative, we need to connect with that,” said Roxane.

So next time you’re pulled down by the weight of yet another racial injustice, remember that as much as we need strategy and action, we also need individual and collective healing.

There are numerous ways to heal, some meditate, some do yoga, sometimes you just need to cry in your bed; but when you’re finished doing those try exercising your creativity, it can reconnect you with what matters and that is the purpose of healing.