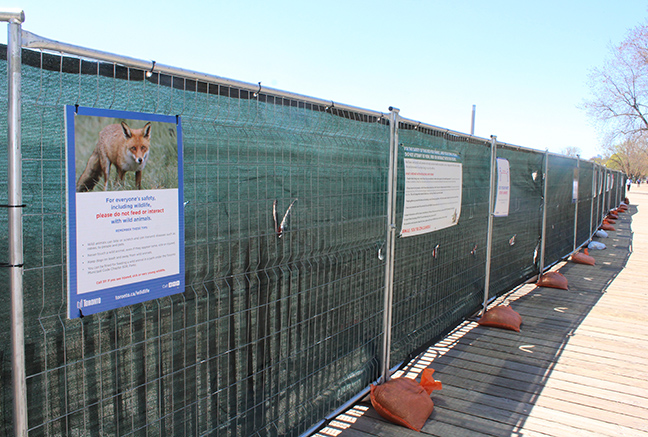 Tall fencing, with screening and warning signs, has been placed along with Boardwalk where a family of foxes have built a den. Photo by Alan Shackleton.

The Toronto Wildlife Centre (TWC) says the home of one its volunteers who helps keep the fox family living under the Boardwalk safe was vandalized earlier this week in an incident that may be connected to a person who was angry after being told to keep their distance from the animals.

In social media posts on May 14, the TWC said the volunteer’s home was vandalized and a security camera in a tree that is by the Boardwalk fox den was pulled down.

“Yesterday the camera we had to monitor the Beaches fox family was vandalized, as well as the home of a volunteer who lives in the area, which is upsetting to us,” the post on Twitter said. “There are elements of both acts which strongly suggest it was the same person/people who carried out these offences.”

TWC said both incidents are now under investigation by Toronto police.

In an e-mail interview with Beach Metro News earlier this week, Beaches-East York Councillor talked about growing concerns for the safety of the fox family under the Boardwalk due to numerous interactions with both people and dogs.

He said the City of Toronto and TWC were working on ways to keep the foxes safe, including a much larger fence with screening, and large notices warning people about the harmful impact of human contact with foxes.

“Taller fencing was put in after we were finding that people were still gathering to try and get a close-up view of the foxes,” said Bradford.

“Many keen photographers were bringing their large lenses down to the area which made for beautiful phots but became a problem because it was exposing the foxes to too much interaction.”

He said it was especially important that people, and their pets, keep their distance and that the foxes are not fed by people under any circumstances.

“Let’s show these animals the respect they deserve,” he added. “Please keep away from the fenced-off area and keep your pets on a leash at all times.”