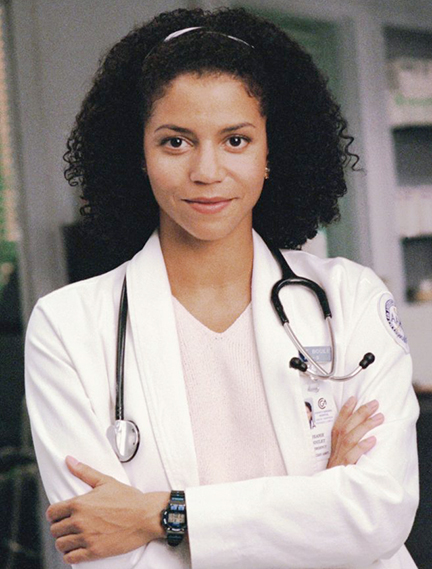 Gloria Reuben, who played Jeanie Boulet on ER, has family links to the Beach through her father Cyril.

During this pandemic there’s been a new interest in tracing our family histories. Who are we and how did we get here?

What’s your family story? If you would like to research your roots, go to the Toronto Public Library website and search “ancestry.ca”. You might be surprised what you find and see yourself in a new way!

“I think it’s human nature to want to know where you come from.”
— Gloria Reuben

Actor/ singer Gloria Reuben (ER, Lincoln) has a family history so intriguing she was featured on an episode of the PBS genealogy series Finding Your Roots. (Tuesdays at 8 p.m.)

Host Henry Louis Gates Jr. told Reuben that she was the first guest whose roots could be traced back to Africa, “the richest family tree back to slavery that we have ever traced”.

Gates explained that, “Gloria was the product of two diasporas, two exiled peoples. Her Jewish ancestors were dispersed forcibly from Spain, her Black ancestors from Africa.”

Her genetic DNA is 59.3 per cent European, 38.7 per cent Sub-Saharan African.

She grew up in Guildwood Village in Scarborough and moved to London, Ontario when she was 12.

Her mother Pearl Avis Mills was a classical singer and clerk at City Hall who came to Canada from Jamaica around 1957. Her father, Cyril, a civil engineer from a mostly Jewish family, was also from Jamaica.

Born in 1890, Cyril George Reuben immigrated to Canada in 1913 with his wife Muriel and worked as a city land surveyor for 12 years. The family moved to Hannaford Street in the Beach around 1919.

In 1925, Reuben opened his own surveying company with his two sons at offices near Victoria Park Avenue on Kingston Road.

Cyril and Muriel raised a family of five children on nearby Bracken Avenue. Their daughters became a gifted piano duo who toured as The Reuben Sisters. Both married at St. John’s Catholic Church. Cyril became a member of the Knights of Columbus.

In 1961 Muriel died at their home on Bracken Avenue. Widower Cyril met the much younger Pearl. They married in 1962 and each started a second family.

Gloria Elizabeth Reuben was born on June 9, 1964. Her father was 73 years old. The marriage did not last and Cyril moved back to the Beach (Orchard Park Boulevard) before he died in 1977 at age 86, survived by 10 children, 33 grandchildren and nine great grandkids.

Gloria Reuben has written a memoir, My Brothers’ Keeper (2019), about her family life: “It was very difficult growing up in a mixed family.”

Her beloved younger brother, David, took his own life in 1988 and her half-brother, Denis Simpson, a performer in his own right, died in 2010. In her book Gloria writes that she and David were the “unwanted ones”. David’s death was “the catalyst for my move to L.A.”

“I love being a big question mark for people,” she said.

Gloria became a television star as a nurse on ER and continues her acting and music career. She has carried on the musical heritage of her family on both sides.

We tend to look on history as a series of tragic events.

By researching our personal family stories we can look back and learn how war, injustice, slavery, racism and anti-Semitism affected generations to come.

Empathy comes from understanding “the other” rather than demonizing those who are “different”.

We are all one human race. We are all interconnected if we trace our distant roots back far enough.
Some 50,000 years ago we were all living on the African continent. Stop the hate! That stranger you meet might just be a long-lost cousin!