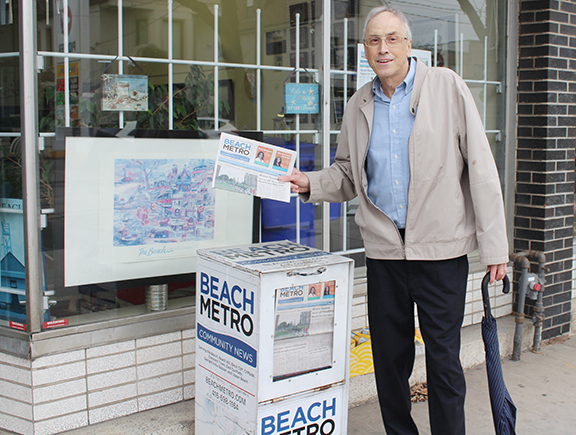 As part of the 50th year celebrations for Beach Metro News, we are visiting with some of the people who make the paper special in the community. Photo by Alan Shackleton.

For almost 20 years, Bernie Fletcher has been writing with insight and humour about the movies, the people in them, the people who make them and the places in and around East Toronto where they are filmed.

He does that in his Reel Beach column for Beach Metro News.

As the paper celebrates its 50th year serving the community, Fletcher shared how he started writing the column and why he loves doing so.

A Beacher to the core, Fletcher grew up in the Glen Manor area and attended high school at Malvern C.I. after which he studied history at the University of Toronto.

Fletcher was a teacher with the Toronto District School Board before he retired in 2004. Schools he taught at included Balmy Beach, Leslieville and Regent Park.

It was shortly after he retired that he got in touch with then Beach Metro News editor Carole Stimmell about writing a column about films and film production in the area.

“Movie production was growing in Toronto so I thought I could take photos and write about Beach locations,” said Fletcher. “Everybody needs a hobby and I was terrible at golf.”

He said the East Toronto area is a go-to spot for movies and television productions to shoot for a number of reasons including the proximity to major studios.

“East Toronto is popular with production companies largely due to the proximity of the Studio District, but also because of the wide range of architectural styles in the Beach, including the R.C. Harris Plant, Kew Gardens, beautiful homes and our Boardwalk,” said Fletcher. “We can look like many different places.”

The community has also been and still is home to numerous talented and creative people in the entertainment and arts businesses.
“The Beach has been home to so many talented writers, artists and performers,” said Fletcher. “A lot of media and film people live in the Beach and our community is welcoming to the arts, even film crews.”

Residents also do a good job not being too star struck when they see celebrities in the neighbourhood, he added.

“Matt Damon lived here for weeks and nobody said ‘boo.’ One homeowner told me how she went down to the basement in her pyjamas to get cream for her morning coffee and Jason Priestly asked if there was anything she needed. In my experience, show biz people are a lot nicer than their ‘Hollywood’ image. I am always impressed with how thoughtful and sincere actors and directors are toward someone who just writes for fun.”

Fletcher said he enjoys writing the columns, and the feedback and suggestions he receives from readers. In particular he likes to write about the ‘unsung heroes’ and those stories get some wonderful reactions, he said.

“I like to research the stories of ordinary people in extraordinary situations, courage under fire, such as the Beach woman who as a young girl saved her deaf mother’s life on the Titanic,” said Fletcher.

“I am especially interested in R.C.A.F. (Royal Canadian Air Force) flyers who flew into danger again and again. Wally Floody was the real ‘tunnel king’ of The Great Escape. Ace pitcher Phil Marchildon was a tail gunner who saved his mate’s life and was also a P.O.W.”

The stories of Captain Arthur ‘Roy’ Brown, who was credited with shooting down the Red Baron, and flyers Andrew Carswell and Robert Buckham are others he has told in his column.

Fletcher said the column he feels received the most reaction was about bank robber Edwin Alonzo Boyd, whose father had been a police constable at Station 10 (now the site of Community Centre 55 on Main Street.

“Even though Boyd confessed to at least two murders before he died, some thought I was too harsh on him,” said Fletcher of the column. “The most touching letter came from a relative of the young woman Boyd murdered in 1947. The victim’s brother had been a suspect and the family was devastated by the death for generations.”

Fletcher said the past year has been a challenging one for everyone in show business, from production companies, to actors, to movie theatre operators due to the COVID-19 pandemic.

He mentioned how much he loves the Fox Theatre on Queen Street East in the Beach and the special experience it provides for movie lovers.

“Streaming services are popular now, but it’s just not the same for me. I’ll take the Fox any day. The Fox has been around for well over a century and let’s keep it for another 100 years. The Fox is a community treasure and I believe Beachers will support all local businesses once we are able to get back to normal.”

Until that time and beyond, Fletcher said he will continue to write his column for Beach Metro News.

“Thank you to all those who support Beach Metro News and local businesses like the Fox. The Beach has a rich history which we need to preserve and nourish. There’s lots of wonderful stories to tell.”