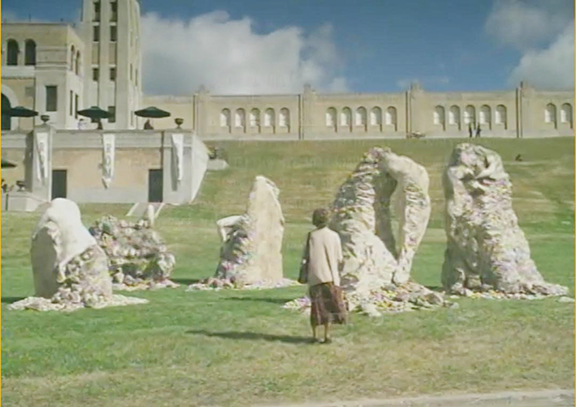 The legendary Sophia Loren in Between Strangers which filmed at the R.C. Harris plant in 2001.

Age should have its perks. We’re not just getting older, we’re getting Pfizer or Moderna or AstraZeneca. Hit me with your best shot, any shot, please!

Age is just a number to screen legend Sophia Loren who got her start in film when she was only 15. At 86 she stars in a new movie, The Life Ahead, which won a Golden Globe and is nominated for one Oscar this month (April 25).

In 1962 Loren made Oscar history by becoming the first performer to win an Academy Award for a foreign language film (Two Women).

The Life Ahead (Netflix) is a heart-tugging drama about marginalized outsiders in a seaside Italian town. Loren is directed by her son Edoardo Ponti.

Back in the summer of 2001 Ponti directed his mother for the first time in Between Strangers which filmed at Edwards Gardens and the R.C. Harris Water Treatment Plant.

Is movie-making an essential industry in a time of pandemic? In September of 2001 the world was gripped by a different kind of crisis. Between Strangers was one of the last films shot at the “Palace of Purification” before the city shut down tours and filmmaking because of 9/11.

A city committee report wrote that the R.C. Harris plant was “one of Toronto’s most important filming resources, whose unique architecture has often given Toronto the edge over many jurisdictions throughout North America vying for location filming dollars.”

There were neighbourhood concerns about “nearly continual filming activity” and calls for increased security. The iconic building had already been used by 16 productions in 2001, including feature films Undercover Brother and The Tuxedo.

Between Strangers (2002) interweaves the stories of women of different generations whose lives change when they confront their past. Ponti has said about his films, “Empathy begins when you start looking through the eyes of another.” “If I like acting, why should I quit?” Retirement is not a word in Sophia Loren’s vocabulary.

This year she won a special award from the Alliance of Women Film Journalists for Actress Defying Age and Ageism. In September Loren will be honoured with the Visionary Award at the opening gala of the Academy Museum of Motion Pictures in Los Angeles.

Loren rose up from a childhood in Naples where she had “a life with nothing, a life with war, a life with no life at all”, telling Variety, “At 86 years old I still have much to give, but so far I can say I led a good life. I was lucky, but I also worked hard for everything I have. It wasn’t easy, but nothing worth it ever is.”

In these difficult times be kind to others and get your shot of hope.