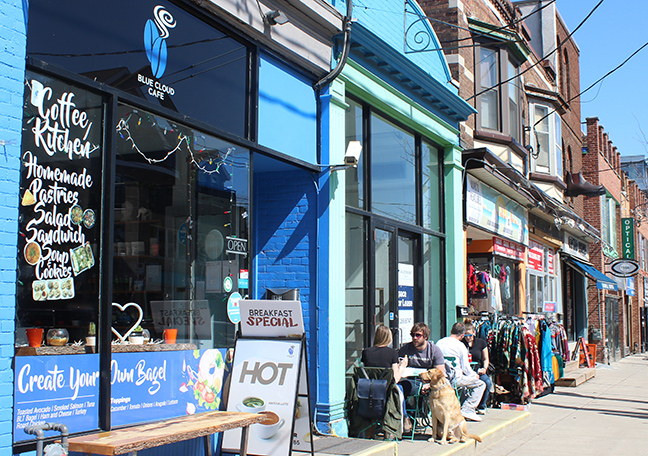 Restaurants, cafes and bars that had just opened their patios for outdoor dining, such as the Blue Cloud Cafe in the Beach, will have to close again as of Saturday, April 3. Photo by Alan Shackleton.

Ford was joined by health minister Christine Elliot, Ontario’s medical officer of health Dr. David Williams, and co-chair of the Ontario COVID-19 Science Advisory Table Adalsteinn Brown in a press conference at Queen’s Park on the afternoon of Thursday, April 1.

The province introduced “shutdown” as a new tier in its colour-coded system below “grey-lockdown,” but it means relatively little will change to Toronto and Peel’s current public health restrictions.

What will change is outdoor patios, outdoor fitness, drive-in cinemas will be prohibited again. However, this time the rest of the province joins the hotspots in a shutdown.

“All 34 public health regions will move into shutdown for a period of four weeks,” Ford said in his press conference.

The announcement comes as Ontario’s intensive care units swell up with COVID-19 patients. As of April 1, there are more than 430 patients in Ontario ICUs.

“We’ve never had more Ontarians in the ICU than we do today,” Ford said.

The province saw 2,557 new confirmed cases of COVID-19 on April 1, following weeks of a spike in cases following the second wave in the winter. The third wave is largely a result of the spread of variants of concern.

The variants of concern, or VOCs, are mutated strains of the coronavirus that have been shown to be more infectious, more harmful, and more fatal. Ford referred to the third wave as a “new pandemic” in his press conference.

The most common VOC in Ontario is the variant originating from the UK (B.1.1.7), followed by less spread VOCs from Brazil and South Africa.

The shutdown means it is illegal to gather indoors with anyone with whom you do not live. Residents are only permitted to go out for necessities such as work, school, groceries, pharmacy, helping vulnerable people, or exercise.

Employers are encouraged to have their employees work from home where possible.

Individuals living alone can have close contact with one other household.

Residents are not permitted to travel outside their region. Physical distancing of at least two metres must be followed and everyone must wear a mask where necessary.

Religious, wedding, funeral services are permitted with only 15 per cent capacity indoors, and outdoors with as much capacity as physical distancing allows.

Small businesses, many of whom in the East Toronto area have been struggling to stay afloat during the last year’s rolling lockdowns and waves, also have rules to follow but not much different than to what Toronto businesses have already done.

All open businesses must screen employees for COVID-19, they must post signage informing people how to screen themselves for COVID-19. Patron capacity must be limited so physical distancing of two metres is maintained.

All workers and patrons indoors must wear a mask or face covering. Workers are to use personal protective equipment (PPE), and any lineups must be managed to maintain physical distance.

For restaurants, bars, and cafes – which only just opened for outdoor dining less than two weeks ago – all indoor and outdoor service is prohibited. Takeout, drive-thru, and delivery is open.

Stores with in-person shopping for essential services such as grocery stores, convenience stores, and pharmacies are permitted to open with 50 per cent capacity.

All other retail, including big box stores, will be open at 25 per cent capacity.

The provincial announcement also follows key findings from the Ontario COVID-19 Science Advisory Table which notes that the province is in the third wave, driven by VOCs.

It also found that younger Ontarians are becoming hospitalized given the increased rate of spread of VOCs. It concluded that the third wave threatens the health system’s ability to deal with regular ICU admissions as well.

It noted the impact of school disruptions was severe for students, parents, and society, and that “further disruptions should be minimized.”

Toronto Board of Health chair and Spadina-Fort York Councillor Joe Cressy noted that 50 per cent of Toronto’s COVID-19 cases have been among low-income workers, 79 per cent of cases are among BIPOC, and more than 60 per cent of workplace outbreaks have occurred in food processing and warehouses.

At his press conference, however, Premier Ford reiterated his view that cases in Toronto and Peel were spiking because of gatherings.

While Ford offered support to small businesses in the form of the Ontario Small Business Support Grant (which offers qualifying businesses $10,000 to $20,000 in a one-time payment), no mention was made for offering paid sick leave to frontline workers.

Local NDP MPPs in East Toronto have made repeated requests to the provincial government to offer provincial paid sick leave.

In a press conference following the Premier’s, opposition leader Andrea Horwath of the NDP called Ford’s announcement “too little, too late” and said it would prolong suffering.

“There is more mixed messaging, there are no financial supports for small businesses, there are no paid sick days, and no comprehensive testing in essential workplaces, there is no cap on class sizes so kids can social distance ins schools, and no comprehensive plan to get the vaccine to essential workers and no paid time off to get the shot” she said.

“This approach failed Ontarians before and I’m fearful it will fail again.”