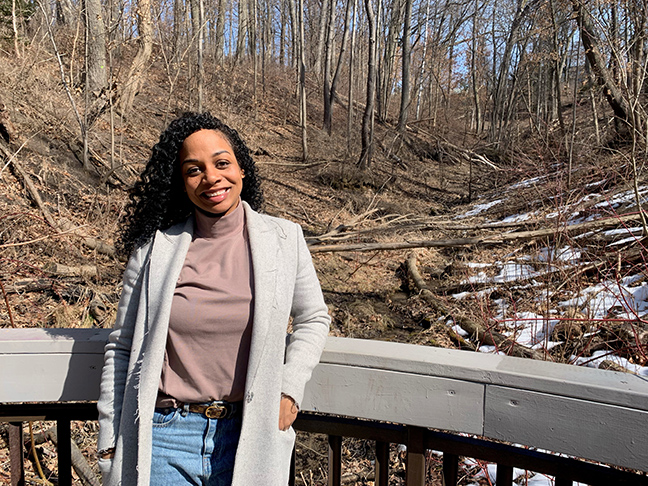 Janelle Francisco grew up in the Beach and is a successful mortgage agent and mother and two. Photo by Mimi Liliefeldt.

Do you believe the statement, “You can’t miss what you never had”?

I’m not talking about material things, I’m asking if you think it’s possible to miss a feeling, a connection, or a bond that you never had?

I spoke with Janelle Francisco, a mortgage agent with a Toronto mortgage group, and mother of two, about this and many other aspects of growing up Black in a predominantly white neighbourhood. Janelle and her three sisters all grew up in the Beach, went to Williamson Road, Glen Ames, and Malvern Collegiate.

“We moved around a lot when I was younger, but I’m grateful to our parents for making sure we kept going to the same school. They wanted us to have the stability of staying in the same schools and area,” she told me.

When I asked what her experience was like at those schools, she responded, “There was not a lot of diversity at all. My sisters and I were one of the very few people of colour in our classes. Having said that, it was never an issue for us. There was never any overt racism or discrimination that I was aware of.”

Though Janelle and her sisters are very tight, she has lots of close friends who unsurprisingly are white. “I never felt like I didn’t belong. But what I did notice was that my friends had generational wealth and these big homes; I wanted that kind stability,” she admitted.

“I bought my first house when I was 25 so my family and I would never have to move again. Because I grew up seeing this it gave me the opportunity to visualize my life a certain way. Maybe had I been raised in another area and not been exposed to it; things might be different.”

Sheer luck and circumstance are significant aspects of success that people don’t always consider. It would be naïve to presume, where you are, is only because you earned it.

Of course, hard work plays a major role, but there are so many other factors that land a person in their position, factors they have no control over. As a Black woman, Janelle is sensitive to these realities. She knows she has been fortunate enough to mostly escape them.

“I don’t think I’m any different than someone who’s struggling. I just happen to be me. I could be in a challenging situation. That could be anybody. Don’t assume if you’re in a good position that it’s because you’re actually better than anyone else,” said Janelle.

“Growing up, race wasn’t a big topic of conversation in our house, but when my husband and I met, we started talking about these things. He’s a man, he’s darker skinned, and his experiences are completely different than mine,” she told me.

“It’s night and day. We have discussed the different racism experiences between light skin and dark skin, Black women versus Black men. It really opened my eyes. Now I understand when he assumes someone is being racist, but I don’t, that he’s probably right. The reason his radar is up is legitimate. It took a long time for me to learn that.”

As Janelle’s world expanded, she has also gained more courage to speak up and set people straight. “A while ago a co-worker said to me, ‘You don’t talk like a normal Black person’. I thought, what does that mean? I told her, ‘What you’re saying is, because I speak intelligently that I can’t possibly be Black and that’s offensive’. I was able to tell them what is so wrong with that statement. I think I caught them off guard that I said something. They said they didn’t mean it that like that, but I pointed out there’s no other way to take it. It begs the question what does a Black person sound like to them?” she said in wonder.

Stereotypes of Black people have done nothing to elevate the Black experience. They are designed to maintain the status quo, to keep Black people from moving forward and upward. Janelle’s co-worker didn’t mean to hurt her feelings with her prejudice, but the moment helped illuminate a division between the two women.

When a community lacks diversity, the harm is to everyone. “When you don’t see yourself reflected in society, it’s hard to imagine yourself in certain positions or being able to do certain things. There’s no one that you’re relating to,” Janelle said.

“I feel that learning about different cultures and about my history, my background is important, seeing that in other people and hearing their experiences, brings it all together.”

This statement she makes resonates with me. We are yearning for something that we can’t quite put our finger on. I ask her if that sounds right. She says, “When I’m around people of colour there’s a sense of belonging. It’s not even something that I knew I was missing. When you’re not around other people of colour doubt can creep in, did they say or do that because I’m Black? But when you’re amongst other Black people you don’t have that worry.”

Janelle loves the white friends she has and grew up with, she assures me she would never trade them for the world. But I understand what she is telling me, I feel it, too.

Janelle is very lucky. She has a supportive husband, healthy children and a successful career. She has the confidence of someone who has three sisters who always have her back and lived her same experience.

Basically, you can have it ‘all’, but even then, you can sometimes go out into the world and feel like you’re missing something.