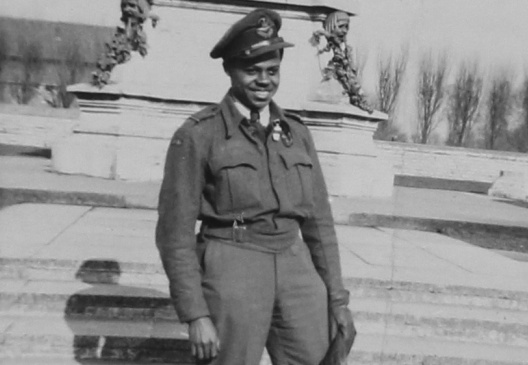 Wilson O. Brooks, a Second World War veteran with the Royal Canadian Air Force, was a teacher at Williamson Road Public School in the 1950s. He went on to be the first Black principal of a Toronto school. He served as a principal at Shaw Public School and Glen Ames Senior Public School.

This column is dedicated to my great-granddaughter Nahla, 5.

Let me make this clear. Yes, there is Black History Month in February but in my humble opinion it should be called African Canadian Month.

Lately there have been articles and statements about the racial inequality in different sectors of society, and they are true.

Let me now bring you some historic facts about Africian Canadians. There have been great achievements made in Toronto, in Ontario and in Canada in the past 120 years by African Canadians.

Some are well-known achievements and others are daily things.

I am not going to give too many names in this article, only in a few cases. The rest is up to you to find out who they are and learn more about them.

In all sectors of society there are people who stand out.

Let’s take a look at our legal profession as one of our first African Canadian lawyers was more than 100 years ago.

One of the greatest African Canadians in the history of Ontario was awarded one for his commitment to his country and his province. His name is Lincoln Alexander, and he served as Ontario’s Lieutenant Governor from 1985 to 1981. He was also Canada’s first Black MP (1968) and first Black federal cabinet minister (1979).

Going into the Beach area about 115 years ago, there was an African Canadian lifeguard who stood out head and shoulders above the rest. He was said to have saved more than 100 people from drowning in Lake Ontario. In those days, shipwrecks were common and many times this man risked his life to save others. He was recognized by Mr. Ward (who Ward’s Island was named after) as one of the best swimmers and lifesavers he ever met.

In the field of politics we have African Canadians on Toronto City Council.

In our local area there are two African Canadians who have done outstanding jobs for parks and recreation. One is a man who many know for his good works, and the other is a super-achieving lady. I have had the pleasure of working with both of them.

In the music industry, there is a man who has lived in the Beach for decades who is well known for performing his songs and as a songwriter. His dad was a great historian and Ontario Ombudsman.

There are so many professions that African Canadians have excelled in that I could not possibly name them all. I encourage you to look into it.

In the police service we had a great and considerate superintendent at the 55 Division station who lived in our area but went on to become Police Chief in another Ontario city.

In the parking control unit, I had the pleasure of knowing the head of the unit. He has now been retired for many years and was a great man.

One of the challenges we face is finding volunteers. In our area I have had the privilege and honour of working with a wonderful African Canadian woman who dedicated a good part of her life to helping others. She was one of our Women of Distinction and had one of the greatest smiles you have ever seen.

Going into the head of companies, where there are not enough African Canadians, let me give you the example of one of the hardest working people I have ever heard of.

His energy and time-saving routines were legendary in his day, and no one was his equal. He had a street named after him in the Beach. He is Frederick Langdon Hubbard, the son of Toronto’s first Black politician.

He worked for the Toronto Street Railroad Co. and was also responsible for looking after Scarborough Beach Amusement Park.

The Toronto Transit Commission came into being 100 years ago, in 1921, and Frederick Hubbard was at the top of this transit system. He became the first African Canadian to sit on the TTC as a commissioner, and helped it become of the great transit systems in North America.

I will now come back to our present day in the Beach, and give you an example of one our hardest working volunteers in the Rotary Club. If I gave you his name, he wouldn’t speak to me. He is one of so many African Canadians who give their time without looking for credit.

I will now go over to the military and the Second World War and the First World War., and those who bravely served. There is one African Canadian woman who has risen through the ranks and become one of Canada’s top soldiers. She also does not seek recognition.

I could go on and on, but these are just some examples of those who have contributed to Canada’s way of life by their unselfishness and ability to help others.

There is, however, an organization of African Canadians who in my opinion are worthy of a special mention. They are those who have opened their church doors and their hearts to help our homeless and seniors by providing lunch, clothing and other services.

To give you a bit of help as you start your research, here are some (but not all) of the names you could look up: Wilson O. Brooks, Julia May Blake (Kirkwood), Dan Hill, Peter Sloly, Yvonne Walmsley, Michael Thompson, and Grant African Methodist Episcopal Church.