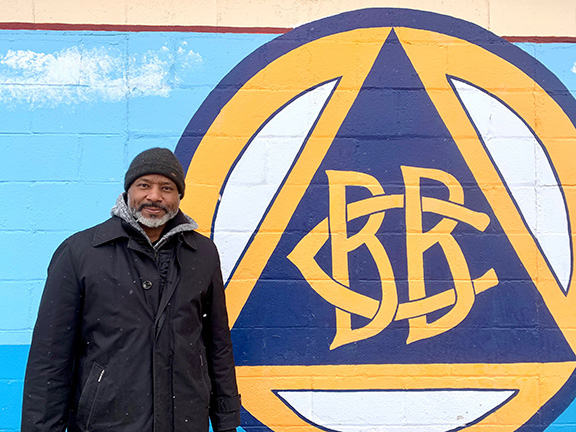 We all know that February is Black History Month, so it feels right to tell a story about an individual whose history has changed how a young Black person might see their own potential, despite the odds.

Steve Anderson is many things, a Black man who was born and raised in Kentucky, a father, a husband, a successful entrepreneur, and an author; but uniquely, he has made history as the first African American coach to win an Olympic gold medal in beach volleyball. He’s also a Beach resident.

Volleyball entered Steve’s life at the age of 14, when his cousins took him to play on the concrete court in Chickasaw Park, Kentucky. He played with a group of adults who took the game seriously, and he quickly realized he couldn’t just rely on his athleticism.

“You have to be technical first. You can’t just catch the ball and control it. In this game you never stop the ball” he told me. “It opened up my mind to a different way of being.”

After a few years of playing in Chickasaw Park, the players joined a league and played in competitions around the city, but his next real eye opener didn’t come until he followed his dream to Los Angeles to learn about beach volleyball.

“It was just before my 21st birthday that I got to L.A. and saw the ocean for the first time. My cousin and my brother picked me up and we pulled over on the Pacific Coast Highway, we looked way down and there’s the beach,” Steve said with a smile as he remembered the moment.

“The next day I’m at Santa Monica Pier, watching people play. I see the system and figure it out. The day after that I came back, and I go straight to the pole and sign up.”

That first day didn’t go as planned, and he realized he had a lot to learn about playing volleyball on sand. Steve took a year to play indoor instead, then he went back to the beach. “I found amazing mentors and that’s where I learned to play.”

His years in L.A. lead to playing on the pro beach volleyball tour as an associate member. Just as he was ready to officially turn pro, some friends asked him to coach and so his coaching journey began. Eventually this led him to becoming a coach for the Australian women’s team.

Steve spent 17 years in Australia and went to four Olympics with the Australian team.

“We won bronze in 1996, gold in 2000, and placed fourth in 2004. Even though we didn’t place in 2004 it was one of my favourites. One of my athletes was injured and they still gave such an amazing performance.”

Steve has a motto that is the name of his published book Challenge Makes the Champion. Not only does he cultivate this mindset in his athletes, but it is a belief that has carried him to his unlikely successes.

“I’m a five-foot, 10-inch Black kid from Kentucky, I had never seen the ocean, the story doesn’t make sense, but this was a journey of self-exploration,” said Steve.

From learning volleyball to growing up without a father, Steve has had to contend with many challenges in his life.

“My father was killed when I was nine years old. It was an accident. My father got between two friends who had an argument. One of the men was shot through the mouth and lived. My father was shot in his leg and it hit a major artery and he died,” Steve said.

“It didn’t make sense to me. I wanted revenge, but my mother didn’t press charges. She said, ‘I won’t have another family’s life ruined. They’re suffering enough by losing their friend and being the cause of his death’. Three years later we ran into the man who survived and his wife at the grocery store. My mom smiled and asked how they were doing. I was enraged. I looked over at the man and noticed he couldn’t look at us. He was suffering. What my mother said was true. I don’t know how she was able to show up like that, even through all her grief, but this is who she became. She always showed up as love.”

Asking ourselves to show up as love when we are at our most vulnerable seems an improbable request for most of us. How can we do that? I think we’re all still learning, but when small eyes are upon us, this task carries more significance.

“Our parents didn’t have to tell us anything about racism. It was the south, in the 1970s, we lived it. When I was six years old, my mother and I took the bus on our way downtown. I was excited,” Steve remembered of a particular incident.

The trip downtown was an adventure for Steve until the white bus driver asked his mother to move to the back when a white lady got on.

“At first I didn’t understand, but then it hit me, it’s the colour of our skin. My mother made it a non-event and we moved. I wondered what this meant. Is my mother not worthy? Am I not worthy? Why didn’t she fight for us? Now as an adult I can appreciate what she did. What would she have subjected us to had she protested?”

As a parent now, Steve talked about how he handles these kinds of conversations with his son, and he pointed out how conscientious he is about not passing down his own biases.

“I for sure have felt self-hate. The model for success was always a Caucasian male. It made you question where you fit in.”

Understanding our own biases is important.

As Steve pointed out, “I grew up watching the KKK parade down the street every Martin Luther King Day; that was normal for me. How can I not be racist? Look at what is asked of me as a man, how can I not on some level be a sexist? We need to bridge the gap between who you are and who you believe yourself to be.”

I see his point immediately; you can’t fix something if you don’t think it’s broken.

Steve has worked hard on understanding his journey. He is energetic and enthusiastic about his next endeavours. Like everything he does it will be strategic and holistic.

It’s hard to say where the future will take him, but for now, he and his family are happy here in the Beach. He will continue to live in his history, as we all do; but he is hyper aware that though we are shaped by our history, we do not have to be confined by it.