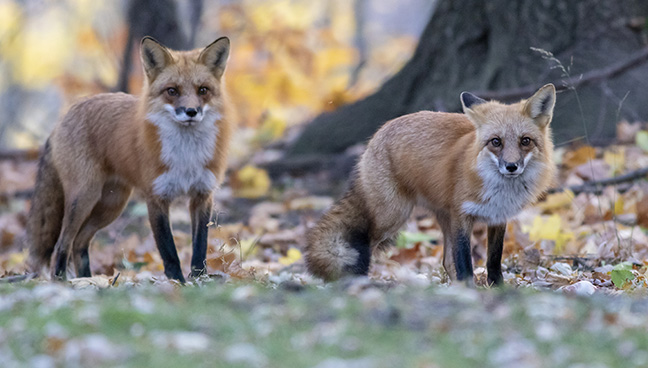 A pair of foxes (photo above) in the Scarborough Bluffs area and a pair of red-tailed hawks (inset photo) were captured in these photos by Ann Brokelman.

I’m not sure about that, and Google does not give me a clear answer, but what I can tell you from my own experience is that on almost every outing, at this time of year, I see the hawks, owls and other wildlife pairing up.

Why, you ask? This is the season of love, of course!

If you think I’m exaggerating, just think about your own experiences.

Maybe you have seen a couple deer walking through a field, but do you remember any of them having antlers?

Maybe you have seen a hawk soaring overhead, or perched on a highway sign, but can you picture two of them perched side by side?

What about a pair of foxes running across the road together? Maybe you have seen a mother racoon with a couple young ones running behind her, but have you seen two adult racoons together?

As so many of our local animals live solitary adult lives, this time of year really offers some unique opportunities for sightings. For many years I was incredibly lucky to see a pair of hawks nesting close to where I worked.

I remember the first year, watching them fly together, occasionally talon touch mid flight, call to each other with their distinct keeeeeeee-aaar call, and perch near each other in the woodlot nearby.

Around the first of March, when they finally decided to build a nest together, it only took a few days before they had a huge nest, almost three feet tall, high in a tree. From the fifth floor window, my colleagues and I were able to see inside the nest and watch.

From the laying of the eggs, to the male and female trading off egg-sitting duties to take turns hunting, to the hatching and fledging, it was a remarkable journey from start to finish.

One of my favourite books is called Red-Tails in Love: A Wildlife Drama in Central Park, written by Marie Winn. If you are really interested, you could also watch a documentary about Pale Male, a red-tailed hawk, who lives on the side of a Fifth Avenue building in New York City.

Here’s one more story for you, about a pair of foxes I saw the other day close to my home.

I saw these two just wandering down the road together, side by side. I have a fox visit my yard almost every evening, and his red fur stands out especially in the snow, but he is always by himself.

This pair stood out, despite the lack of snow, and I watched as they walked, chased each other, played and even snarled at each other (just like older human couples do). I sat in my car, watching in fascination, and resisting the urge to drive after them as I didn’t want to disturb them or change their behaviour with my presence.

This fox family’s territory is along the Scarborough Bluffs, and they travel many miles everyday hunting. Foxes are omnivores, and their protein diet usually consists of smaller animals, such as voles, rats, mice, rabbits and hares, as well as birds and bugs. They round out the vegetation part of their diet with berries, apples, and whatever they may find tasty in your garden. You should not always blame the missing tomatoes on the raccoons!

The male is called a dog, the female is a vixen, and they will soon be having kits, though we will not see the young ones until April.

Did you know that the fox has 20 different calls? The most heard red fox vocalizations are a quick series of barks, and a scream-y variation on a howl, which I assume we hear a lot more of when they must start putting up with their kids.

Enjoy this time of year, but please keep your distance… you would not want to ruin the mood!