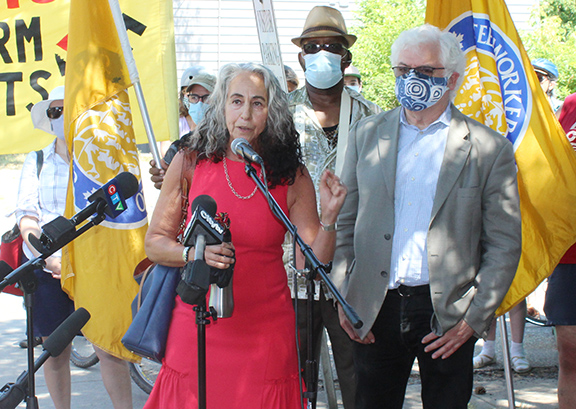 Beaches-East York MPP Rima Berns-McGown is seen in this Beach Metro News file photo speaking at a protest against racism in July of 2020. Photo by Alan Shackleton.

Beaches-East York MPP Rima Berns-McGown has received a notice of pending litigation from Ranee Management’s lawyers for her recent Tweets and comments.

She was sent the notice on Feb. 17 in a letter by lawyers representing the property management company requesting her to delete Twitter posts, and “agree to not make defamatory statements about Ranee Management.”

It comes as tenants unions from Crescent Town and Goodwood Park Court apartments (the latter owned by Ranee) meet with the Landlord and Tenant Board for process hearings to determine whether or not tenants can have consolidated hearings and if the adjudicator will determine whether tenants can bring expert witnesses to appeal at the subsequent hearings slated for March and April 2021.

Berns-McGown, who is the Ontario NDP’s critic for poverty and homelessness,  is expected to be a witness at the hearing if allowed.

“This is a scare tactic, trying to make me be quiet, they want me to not lend credibility to the case,” she said of the legal notice.

Since March of last year when the COVID-19 pandemic began, tenants at apartments at Crescent Town and Goodwood Park have been demanding to negotiate with landlords collectively as a solution for rent relief and to alleviate evictions due to income loss or illness resulting from the pandemic.

Berns-McGown has been a vocal supporter of the tenants unions, tying in provincial policy – such as Bill 184 – passed by the current government as an exacerbating factor in the evictions. She said that under the bill, tenants would risk likely eviction if they signed a repayment plan with landlords.

All the while the tenant is trying to pay rent and arrears resulting from the repayment plan. It’s why tenants unions say they have demanded collective negotiation.

In the letter to Berns-McGown, the law firm’s senior partner, Irvin Schein, wrote that “we have been advised by our client that on two separate occasions, you re-tweeted and made defamatory statements on your public Twitter page.”

The letter points to one retweet from Dec. 24, 2020 where Berns-McGown retweeted a post from PeoplesDefenceTO – a group defending tenants unions in Toronto.

“#NoCovidEvictions: @ParkGoodwood tenants aren’t asking for much. They are asking their multi-million dollar landlord to withdraw their neighbours’ eviction hearing and negotiate fair repayment plans. On the eve of a province-wide lockdown, all they had to say was:”

The letter points out that below this statement made by PeoplesDefenceTO is a photograph of Ranee Management paralegal Ilana Glickman with a quotation allegedly attributed to her saying “we do have to run a business here.”

Beneath the quote, it says “Ilana Glickman of Ranee Management on why she’s willing to evict families, children and seniors during Christmas.”

Pppl will become homeless. Some will die; others will never get back on their feet.

We need a ban on covid evictions & #RentReliefNow.”

Minden Gross reiterated in its notice that “these tweets are grossly inaccurate.”

They allege that the tenant in question “had repeatedly engaged in illicit activities and posed an ongoing threat to the health and safety of Goodwood Park residents.”

The letter goes on to identify more statements and Tweets made by Berns-McGown that Ranee lawyers allege are defamatory, including one in which Berns-McGown says in a retweet:

“I spent months trying to get Pinedale & Ranee to negotiate meaningfully with their tenants. They refused.

Instead they tried to bully tenants into repayment agreements they knew they couldn’t manage: the path to certain eviction.

Calling the statement “grossly inaccurate” again, Ranee’s lawyers affirm that the company has “offered to negotiate meaningfully with the tenants of Goodwood Park, on a case by case basis, in light of COVID-19.”

“Ranee Management has never attempted to ‘bully’ tenants in any way,” the letter reads.

As such, Ranee’s lawyers told Berns-McGown in the letter that if she fails to remove the Tweets and stop making “defamatory statements” about the property management company it “will commence the appropriate legal proceedings against you.”