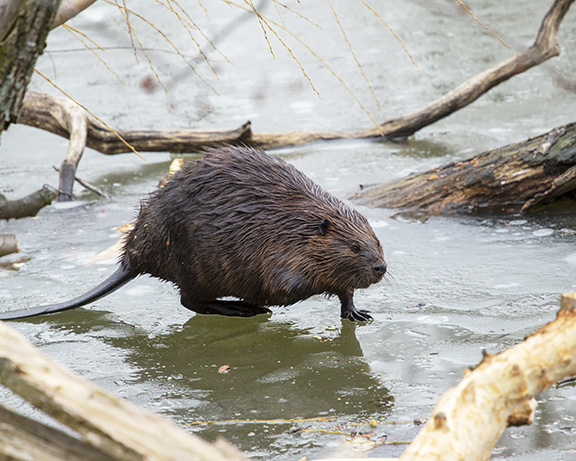 A one-eyed owl, a three-legged beaver and a coyote with an injured leg. These are all animals that are thriving and surviving in the wild. Photos by Ann Brokelman.

Over the years I have come across several injured animals. While many of those stories have ended sadly, this article is meant to be uplifting and, as such, will be about the amazing ability of wildlife to survive, despite missing limbs, paws or even eyes.

Meet Nobel: a one-eyed barred owl. Nobel was hit by a car, on Christmas day of all days, a few years back. Thanks to the staff and doctors at Shades of Hope the Owl Foundation, Nobel was given a second chance.

At the foundation, after his treatment, they weren’t sure if he’d ever be able to hunt on his own. He was given an opportunity to test this and, amazingly, yes! He could hunt really well.

After this, I was called to the foundation to pick up Nobel and take him to be released. A wonderful family allowed us access to their back yard, where they backed onto hundreds of acres of woods and a pond only five minutes from where he was found. The release was incredible, as the owl initially landed in a nearby tree instead of disappearing. He even let us watch him make a few short flights from tree to tree before taking off into the darkening sky.

So, you may be wondering: how can an owl survive with only one eye?

It turns out that owls mainly hunt using their hearing. They hear the mice, other rodents, snakes, rabbits, etc. in the weeds and grass and can find their near exact location. Some owls can even identify the sounds of a mouse tunneling under the snow and pinpoint its location with enough accuracy to grab it with their talons, without ever having seen it.

It also turns out that, with their constant head movements, owls can perceive depth and hunt even with just one eye. I guess having the ability to turn his head 270 degrees will come in handy for Nobel and his monocular vision.

I knew there was a family of beavers at a pond not too far from my home, but I hadn’t had a lot of luck seeing them lately. I decided to swing by to have another look and happened to catch them enjoying the sunshine and snacking on some branches.

Beavers are adorable when they eat, as they, like a raccoon, use both hands to hold their food up to their mouths. Keeping this in mind, as I watched the family snacking it struck me as odd when I noticed that one of the beavers was only using one paw to eat. The beaver then started to move around and, sure enough, he only had three paws: one forepaw and two hind feet.

I watched him climbing the shore, and he was quite adept at using his hind paw as both a forepaw and a hind foot. He just moved it wherever he needed it to be. He had no trouble walking, climbing or even hauling a large tree branch to the water.

What about swimming, you ask? Here is the thing: the forepaws are small and have no real webbing anyway. The front toes have long sharp claws to help them dig, as well as using them like hands for carrying sticks, stones, mud and other objects for their construction tasks. This is where I imagine this guy struggled the most, but I guess that’s what having a beaver family is for!

The beaver was a full-grown adult, looked like he weighed at least 45 pounds or more, and seemed very used to walking around with only three legs, so I imagine the injury happened a long time ago and he’s done just fine getting by.

Another chance encounter I had recently involves a very special coyote I call One Paw. (OK, I probably need to work on my naming… but do you know how many coyotes I’ve seen over the years? You try coming up with creative names for all of them!) This happened in Scarborough, near the end of last year, when I got a call from Chelsea about a coyote with some sort of leg injury. I went over to find her and the only one I could find was moving easily around the park, hunting, and did not seem to be in any distress.

With my camera I was eventually able to see that she was missing a lot of her one paw, but as I watched her momentum and agility, I became confident that she would be OK, if people left her alone.

It turns out that the Toronto Wildlife Centre had been watching One Paw for over a year as a result of the constant phone calls from concerned Torontonians.

Luckily, there’s nothing to worry about. She is a beautiful female, and healthy. One Paw adapted quickly to her injury, as it was her only choice if she wanted to survive.

She can run, walk, jump, and hunt, and there’s no need for us to interfere with her. Please do not feed coyotes.

So, if you see an injured or hurt animal, including reptiles, rodents, birds, hawks and owls, what should you do? In Toronto you have the https://www.torontowildlifecentre.com/ and if you are in another area check with the website Ontario Wildlife Rescue and locate the closest centre to help you.