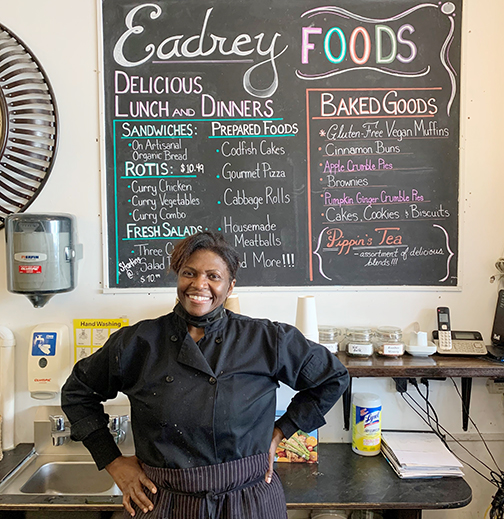 If you like hot sauce, you know a good one will have a slow burn. It won’t melt your face off at the first taste. As you add a little more for each bite, the intensity increases, layer after layer until you can’t take it anymore and have to douse the fire as quickly as possible.

Racism can be like this too. Sometimes it’s only a little uncomfortable, and other times it engulfs you.

Eadrey Hemmings of Eadrey Foods on Queen Street East, just west of Leslie Street, has experience with both.

Born in St. Ann, Jamaica, Eadrey moved to Ottawa when she was 11 years old with her aunt.

“I don’t really have memories of it being a bad thing, but I missed my family and my siblings. Eventually I eased in. Ottawa is small, so many of the immigrants stuck together,” said Eadrey. “It was a nice community with people from Jamaica and other Caribbean countries. On holidays they would have get-togethers and hang out.”

Starting school in a new country was strange for Eadrey, suddenly she was the only Black kid in her class. Her two best friends were a Vietnamese girl and a Russian girl, but she also made some other white friends and thankfully doesn’t have any memory of the kids being racist.

At 15 years old Eadrey started working at a restaurant in Ottawa called the Hay Loft, where her curiosity and love for food began to flourish.

“In the summer I worked on the patio at the refreshment bar. I had a love for food, and when the pastry chef would make certain things I would go home and try to recreate it. It was cool because when they had meetings about the menu, they always included me.”

As much as she loved Ottawa, eventually Eadrey outgrew the city and decided to move to Toronto when she was 30 years old. She lived with a friend in Mississauga while working and getting to know her new city. When Eadrey met her future husband, she fell in love with the Beach and decided to move here.

Her career as a consultant began to take its toll as her company had her commuting to Vaughan daily; she needed a change.

Eadrey took her leave and shifted her focus to the side project she had been developing over that last year. With the encouragement of her husband and his friends Eadrey had been fine tuning her hot sauces and marinades. After countless hours of research and marketing meetings, she was ready to launch.

“It was a lot of work, we did a lot of in-store demos, summer festivals, and the Wine & Cheese Show. Sometimes you found someone who wanted to sell it, but it was draining,” she said. “Selling the sauces to smaller stores run by older white men was challenging. They saw me and would often put up a block before I even got to say anything. Younger store owners were much more receptive.”

After a few years of making the sauces, Eadrey felt she had more to offer and had always loved the idea of having her own gourmet food shop.

“I wanted a shop that would include my products, other small businesses’ products and prepared foods,” she said.

In 2011, Eadrey Foods opened its doors and the neighbourhood, eager for locally made products and prepared foods, responded with enthusiasm. Eadrey’s menu carries a wide selection of soups, quiches, pot pies and salads, but the most popular has to be the chicken roti. She always has a handful of Jamaican dishes available.

“It was important to me to have some Jamaican food on the menu. My mom and my friends taught me many of these recipes. My favourite is stew peas and rice, but I only make it at home, it’s too long a process for the store,” she said with a laugh.

When I asked if she had ever experienced racism running the shop, she replied, “No, it’s been great. There was one time that a woman came in and my two white staff were taking care of the front. I came in from the back with a platter of sweet potatoes and a customer exclaimed to two white ladies behind the counter, ‘She’s awesome! Where did you get her? ’ The staff explained that I owned the store. I just laughed it off and wasn’t offended.”

I pointed out that a lot of people wouldn’t have been as good natured about this type of common misassumption (that the Black person in front of them isn’t the boss), but she shrugged it off.

Likely Eadrey’s upbringing shaped her views on how to handle racism. Though she isn’t afraid to speak up, she is less rattled by ignorance than outright unfairness. “My parents didn’t speak to me about racism, I had to figure it out on my own. I understand why they didn’t. When you come here as an immigrant, you’re not really focused on whether people like you or not. You have one focus: get a job and make money. I also think West Indian Blacks vs. North American Blacks, have a very different life experience. We’re born in a country where it’s all Black people. You don’t have all that racism crap until you come here, and you’re constantly reminded you’re a Black person.”

Eadrey said that this summer was a tough one. “This summer with everything that happened, starting with George Floyd, was really hard. When I think of it all I still feel sick.”

When I asked her if there was something we could do as a community her answer was raw in its honesty. “I don’t want a white person asking me what they should say. I don’t want to educate anyone anymore. It’s not my responsibility. You can’t expect Black people to explain that they want to be treated equally, it’s totally ridiculous. I’m just exhausted with it. I don’t answer for all Black people, and you also don’t get a prize for being nice to Black people or having Black friends.”

Eadrey admitted that she’s been pretty lucky and doesn’t have many stand out moments of racism.

Though she is able to stay focused on her goals, she is still exhausted by all the injustices even if they aren’t directly happening to her.

This is something many people underestimate; if you are a person of colour racism doesn’t have to happen to you in order to be felt by you. Much like a hot pepper, you don’t have to be the one cooking for it to burn you.