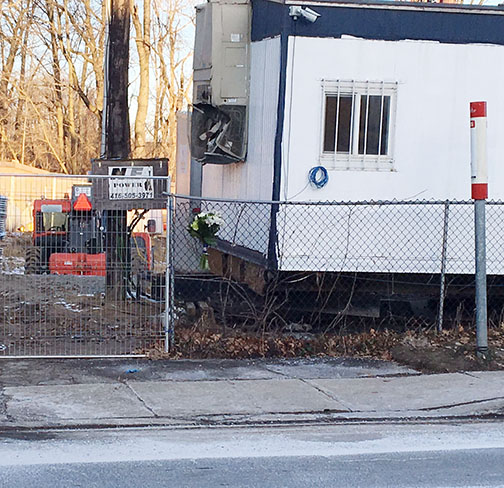 Flowers were placed on a fence at the construction site on Clonmore Drive and Queensbury Avenue last month. Adam Christopher Chmielarz, 32, died after being struck by a vehicle on Dec. 17 while working as a traffic signalman on Clonmore Drive. Photo by Alan Shackleton.

A 23-year-old man has been charged with careless driving causing death in connection with an incident in December of last year on Clonmore Drive in southwest Scarborough.

Adam Christopher Chmielarz, 32, died after being struck by a vehicle on Dec. 17.

Chmielarz, of Utopia, ON, was working as a traffic signalman in front of a construction site on Clonmore Drive at Queensbury Avenue when he was struck at approximately 4 p.m. by a vehicle heading west. He was rushed to hospital but succumbed to his injuries.

At the time, police said a 23-year-old man driving the vehicle involved in the incident remained at the scene.

Along with police, the Ontario Ministry of Labour also investigated the incident since Chmielarz was working at the time that it happened.

The Ministry advised Beach Metro News on Jan. 21 that their investigation was continuing.