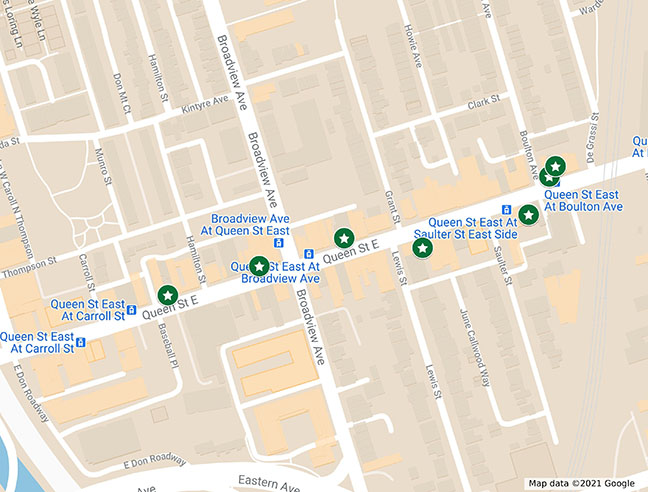 Residents and local organizations are joining Toronto-Danforth Councillor Paula Fletcher in objection to a cluster of seven cannabis shops around Queen Street East and Broadview Avenue.

It’s the second time Fletcher’s office has sent a letter to the Alcohol and Gaming Commission of Ontario (AGCO) regarding the issue. The first was sent in July 2020, when the city passed her motion requesting ACGO to consider the proximity to community services and parks, as well as communications from the city against clustering of cannabis shops.

While in the summer the initial objection referred to four pending applications for pot shops on Queen Street East, this second objection comes as the area is expecting to see seven such shops.

“It is concerning that there are so many along this stretch of Queen Street East, and that they are so close to the South Riverdale Child-Parent Centre, the Ralph Thornton Community Centre, the Queen/Saulter Library and public parks,” Fletcher wrote in the letter.

She said she has heard from several community members, with more than 20 constituents writing in, all trying to understand why there are seven cannabis stores near one major intersection and how the AGCO approves applications for these shops.

“Everyone’s clear, no one is opposed to legal marijuana,” Fletcher told the Beach Metro News. “They’re opposed to the overconcentration of shops.”

She cites the corner store model adopted by the current provincial government as problematic for residents and communities, akin to having “seven LCBO stores one after the other.”

Original regulations set up by the provincial government of Kathleen Wynne restricted cannabis shops within 300 metres of a school, childcare centre, or daycare centre, but Fletcher said “it flew out the window” with the change in Ontario governments.

Others in the community raise economic and social concerns of the clustering of pot shops.

“The problem is what’s happening on Queen is if you end up with all these stores selling the same thing a whole lot of them will go out of business,” Ralph Thornton Community Centre board chair Alan Lennon said.

As the COVID-19 pandemic has forced many small business closures and commercial evictions, Lennon is concerned that it will become more and more difficult to fill the small storefronts in an economically viable way.

“The other part is, if you have a block with all the same shops, you’re not going to have a lot of traffic – you’ve limited it,” he said.

Non-profit community organization Fontbonne Ministries has a branch – Mustard Seed – on 791 Queen St. E. The location is a short walk from Queen Street East and Boulton Avenue, where there are three pending cannabis shops at the small intersection.

“We understand it’s something legal, regulated, and you have these stores,” Fontbonne Ministries executive director Ben Vozzolo said. “But we question the need for that many in such a small area.”

The organization serves vulnerable populations and runs a drop-in program at its Mustard Seed location on Queen Street East. Vozzolo raises concerns of having so many cannabis stores in close proximity to vulnerable people.

But it’s not just the social effects, they’re concerned about the diversity of retail in the neighbourhood.

“I’m curious to know what AGCO’s criteria is for determining how many of these shops are put in one neighbourhood,” Vozzolo said.

Fontbonne, along with Ralph Thornton Community Centre, and other community members, has sent letters to the AGCO asking about the approval of these shops. No one has received any replies.

“It would be nice to have a response acknowledging the concern,” Vozzolo said.