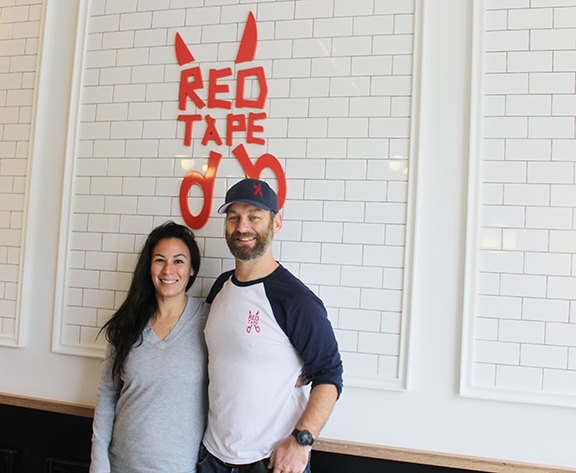 Sean and Sarabeth Holden recently celebrated the opening of their Red Tape Brewery in the Main Street and Gerrard Street East area.

The brewery officially opened its doors in early December of 2020, and it’s the realization of a dream for the East Toronto couple who live in the Gerrard Street East and Greenwood Avenue area.

The Red Tape brewery is located at 159 Main St.

In an interview with Beach Metro News in December, Sarabeth said that 2020 had been a busy year for her and Sean.

In 2020 they opened their own business during a global pandemic and welcomed their son Jack into the world.

When Jack was born last year, Sean brewed up a special Celebration Saison to mark the occasion and to share with friends. He had done the same thing when their first son Ray was born in 2018.

“It got lots of praise from people and they were so happy to be able to share it with us,” said Sarabeth of the beer brewed for Ray’s birth.

And that’s when the thought of opening their own brewery began.

It was an idea that had been “brewing” for some time with the couple as Sean had past experience working with Beau’s brewery in Vankleek Hill, which is a little south of Hawkesbury, Ontario.

In 2019, Sarabeth’s contract work was coming to an end and she and Sean decided that was the time to begin the process of opening their own brewery.

What makes Red Tape special is that along with batches it brews for customers to buy and take home (only curbside pickup at the moment due to COVID-19), the brewery also makes individually created beers to help people celebrate special occasions.

Sarabeth compared it to a couple getting a special and personal floral design for a wedding.

“We will design a beer for your special event. We find out what kind of beer they like, and work with them to create it.”

They then make the special brew for the clients to share with their family and friends.

Red Tape’s beers are distributed in cans for sale at the moment. They are licenced to both make and distribute beer at their site.

Sarabeth said that only the LCBO could distribute the products made by small craft brewers in the province prior to 2016. That change in legislation sparked a boom in small breweries across Ontario, many of which were able to see their sales grow by being able to sell in grocery stores and directly from their brewery sites.

Though they have only been able to sell curbside since the provincial lockdown due to COVID-19, Sarabeth said they have been very well received by the neighbourhood.

“We had a line up (on a weekend day in mid December), and everybody was saying they were so happy to see us here,” she said.

Red Tape chose the Main Street site for its central location and worked with local architectural firm Hello Architecture to design the space. The site had previously been home to Premiere Donuts and Deli.

“We didn’t want it to be just the local beer hall,” said Sarabeth.

One of the key changes they made to the storefront was to install garage-type front windows that can be opened in the good weather and bring the outdoors in.

They do not sell food, though customers will be welcome to bring in their own once COVID-19 restrictions have been lifted and they can welcome customers to stay for a beer served on tap.

Not serving food means they can also be a dog-friendly space, which will obviously be important in the Upper Beach neighbourhood.

Sarabeth is of Inuit heritage, and went to high school in Bathurst, New Brunswick but also lived in Pangnirtung on Baffin Island in Nunavut and in Halifax where she attended Dalhousie University. She is also president of the Toronto Inuit Association.

The name Red Tape Brewery was inspired by a number of different things including the amount of it they had to cut through to open their own craft brewery. Red tape is also used as an electrical tape for low voltage wiring.

For more information on the Red Tape Brewery, including some of the brews they presently have available or how they can create a bespoke beer for your special event, please visit them online at https://redtapebrewery.com/