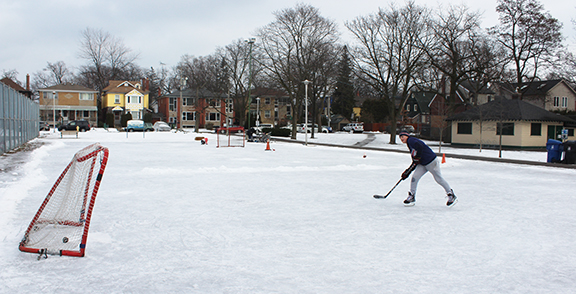 A hockey player works on his shot while on the ice at Norwood Park earlier this week. Photo by Alan Shackleton.

During this COVID-19 dilemma we have now seen great interest in how people can spend their leisure time, especially here in the east end and the Beach.

One of the most popular events 120 years ago or so and up to the present day is ice skating. I have written about this in past articles but it is time reminisce and dedicate this column to those skaters from then and now.

Oh, one particular thing you might not agree with is my “names or titles and places” where these rinks were located. We start from north of Danforth and go south to the lake and west to Coxwell Avenue.

North of the Danforth from approximately Dawes Road to Victoria Park Avenue was a large farm owned by the Massey family. (They were also a great farming and agricultural implement company.) On their farm was a large pond called the Massey Pond, and in the winter the family allowed people to skate on it when the ice permitted.

In the same area, known commonly as Dentonia Park, a new skating rink was built for people by the city. Remember this was in the 1890s and we continue to do so right up to 2021.

On the southwest corner of Main Street and Danforth Avenue there was the Aberdeen Curling Club which was named after the current (in 1893) Governor General of Canada and his wife. This curling rink had natural ice and was used for many charitable and recreational events. One of the most popular activities was ice skating for the public. The rink was there until the end of the First World War.

We now proceed to Main and Gerrard streets where the present Ted Reeve Arena is located. There was a Young Men’s Christian Association building in the area for the railroad workers that was in existence also until after end of the First World War.

The area was part of the Grand Trunk Rail Road, later the CNR. In the back of the YMCA stood an athletic field known differently as the Grand Trunk Athletic Field. In the winter, weather permitting, skating was allowed there for residents in the area.

Later, as progress arrived, the YMCA was torn down and in the 1950s the Ted Reeve Arena came into being. Ted Reeve has been the most popular place for pleasure skating, hockey games, and social events. I would venture a million or more people to have had the pleasure of this grand tribute to the people of the east end and Beach. And it will be there for another 50 years!

There are actually and have been dozens of skating rinks in our area. I can’t write about all of them, so I will just highlight some of them.

One of these “rinks” was located in Norwood Park, just south of Gerrard Street. It was also known as Morton’s Grove.

We now proceed south to the Main Street and Kingston Road area to one or two of our most popular rinks with different names.

The prosperity along Kingston Road, from Lee Avenue to the present Glen Manor Boulevard, was the area owned by Rev. Walter Stewart Darling who was an Anglican priest serving a number of churches in the east end. He originally owned the property from Kingston Road south to approximately Williamson Road. On this property was a pond which later was used as a skating rink.

When Rev. Darling died, A.E. Ames, who was a wealthy stockbroker, purchased the land. He was an avid golfer and recreationist. On his land he started a golf course called Glen Stewart, later to become the first municipal golf course in the city. The aforementioned pond was used by hundreds of Beachers as a skating rink. Instead of calling it the Glen Steward skating rink they called it the Ames rink or Ames bush.

Now heading east to what is now called the Glen Stewart Ravine, we come to another popular skating spot known as Glen Stewart. These skating places were quite popular in the early days of the Beach.

However, what we now call Glen Stewart is in reality named Glen Duart. The property was owned by Allan Maclean Howard. He owned land from approximately Southwood to Beech between Kingston Road and Queen Street. He named the area Glen Duart, and there were three ponds and a stream where people skated in the winter.

Now that I have you currently confused, the city called this property Glen Stewart instead of Glen Duart because of the Glen Stewart golf course which was located north of the present Williamson Road Bridge.

In the winter the area became an attraction for ice skaters. For the past many years, due to the hard work of local realtor Thomas Neal (Beach Citizen of the Year in 2012), a rink has been made in the area.

Neal would flood the property between Glen Manor East and Glen Manor West for the benefit of all the skaters in the area. He has done this on his own and with the help of many neighbours. My ice skates off to you Thomas! However, the weather is not helping so far this year.

We now go south again past Queen Street all the way to the lake between Lee Avenue and present Leuty Avenue on Alfrescoe Lawn. This was the location of the original outdoor skating rink some 120 years ago. It was known as the Kew Beach Skating Rink and was part of the recreational and social club known as Kew Beach.

It was private land but was given to the residents as a skating rink during the winter months. In the year of 1907 the city bought all the land on the east side of Lee Avenue to approximately Waverley Road for a park to be called Kew Gardens. In the park were all kinds of sports clubs including lawn bowling, baseball, tennis and ice skating. The Kew Gardens outdoor rink remains as one of the most popular in the east end of the city to this day.

Now put on your skates as we are going west to the Kew Beach school where there was also another skating rink. On the south end of the school is Pantry Park, noted for many athletic activities over the years. However, it was originally called Raine’s Pond after one of the original pioneers. It was used as a skating rink in the last century.

In the early 1900s, for some time it was known as the Kenilworth Avenue Skating Rink. You could listen to a band playing while you skated. It was one of the first commercial skating rinks in the Beach area. But like all good things, it went the way of the dodo bird.

Now dear Beach skaters we come to the grandfather, or grandmother, of all our skating areas – Ashbridges Bay.

The water during winter was used for skating for the past 200 years. If you don’t believe me, you should go down and see someone skating on thin ice. Though I do not suggest you do it.

Once more we are going west to our final skating rink in this column. We are heading to Coxwell and Queen on the north side where there was once a pond called Small’s Pond. It was named after Mrs. Small, another large landowner. During the winter months, people would go pleasure skating there.

As I wrote before, there are more than a dozen more rinks in the area but that is for another column.