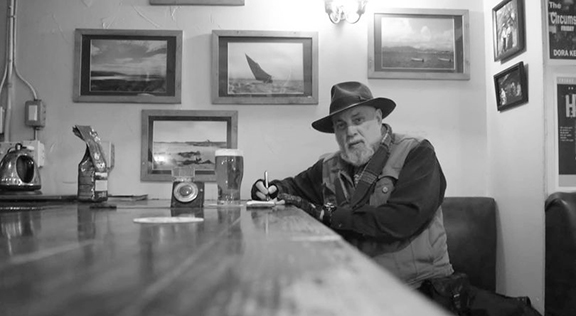 East York's Gary Webb-Proctor died on Dec. 28 at the age of 70. Photo by Julian Taylor.

Gary Webb-Proctor, known as Gary 17, a well-known music promoter, songwriter and journalist, passed away on Dec. 28, at the age of 70.

Family and friends spread the word on Facebook, which quickly filled with tributes to the local empresario.

Musician Julian Taylor said, “He was a legend and he was my friend. He was like a circus ring master and he knew the whole Toronto music scene like the back of his bicycle gloves. Everyone knows Gary 17. An odd duck, a real character and a one-of-a-kind individual who tried his best because at the end of the day he cared a lot about the music, the musicians and the scene. If there was ever an unsung hero for the Toronto Music Scene, he would certainly be one of them.”

Webb-Proctor said he studied Survival at Hard Knocks University, but he certainly had a knack for publications. “Gary was your classic newspaperman, full of opinions, dogged in his determination to get the ads and the subscriber audience, and eager to embrace digital to maximize his content,” recalled Tina Novotny, a freelance writer.

“Gary was a great supporter of neighbourhood initiatives, like the Danforth East Community Association’s programs and events. He was always out there tearing around on his yellow e-bike making sure he captured local stories that mattered.”

Webb-Proctor created to-nite magazine in the early 1990s, distributed in music venues from Oakville to Oshawa and up to Aurora, then sold it to a group that turned it into a daily news publication. That’s when he took his music coverage online as Toronto Moon starting in 2009.

He also published The Danforth CentreTown News for four years, then started his monthly news magazine, The East York Chronicle, in January 2014.

“I wrote a catch-all column for the Chronicle called “East York Moments”,” said Novotny. “Gary always wanted as many voices in the Chronicle as he could get. I know his first love was the Greater Toronto music scene, but Gary had a huge commitment to our Beaches-East York community, which he summed up in the Chronicle’s mission statement:

The very divergence of viewpoints, backgrounds, heritage and religious/political affiliations that you’ll find in this area is indeed part of what it makes it so unique. It is a human-scale community in which people who derive their origins from all over the globe live together if not in perfect harmony then at least for the most part in a passably peaceful way. This diverse microcosm within the microcosm of multicultural Toronto, we believe is, in its own way, “Showing the World How to Live Together”.

East Yorker Justin Van Dette said Webb-Proctor played an extremely important role in the community through his work with The East York Chronicle.

“Gary was very focused and worked hard to ensure the people of East York were informed and still had a news publication they could rely on,” said Van Dette.

“He helped raise the profile of so many community organizations and the good work that they did. Gary’s East York Chronicle was the last soley-devoted publication that went across the former Borough of East York and we owe him a debt of thanks and gratitude,” he said.

“I was very sad to hear about Gary’s passing and I know he will be missed by many. He was the founder of the East York Chronicle and loved writing about East York. He touched many lives and helped the community stay connected. He was also a titan in Toronto’s music scene and promoted and mentored many east end musicians. My sincere condolences to his family and friends,” she said.

“Gary spent his lifetime tilting his lance against windmills, waging war on the people and ideas he knew to be cruel with his only goal to make the world a better place,” said his Gary’s brother Ric Proctor, who lives in Alberta.

“Gary was also a lot of fun, the life of the party as we say and he had a way of making you feel that you were the most important part of the show.”

“He was my dear friend and surrogate father,” said actress, musician and sous chef Deanna Fae.

“I don’t know who I am going to call for advice in the middle of the night when something is wrong now. At least he was able to open a Christmas present from my boyfriend and I in his hospital bed and smile one last time.”

Due to COVID19, Ric Proctor said a celebration of Gary’s life is not currently possible.

“At this time, there are no formal plans for a ceremony of remembrance, but if you have a song to sing, sing it out loud.”