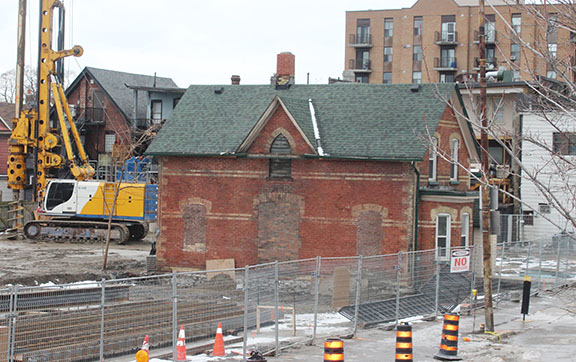 The City of Toronto has officially included a small two-storey home on Main Street that was built in the late 1800s on its Heritage Property List.

Heritage Designation for the house at 292 Main St., on the west side between Danforth Avenue and the railway tracks, was first sought in October of this year and officially finalized with a bylaw tweak at the Toronto City Council meeting of Dec. 18.

The building’s designation was considered extremely important given that a condominium project is being built beside it, and the home needed to be protected.

During work this fall to tear down buildings on either side of the house, it was surrounded by scaffolding in order to protect it. For now, the house stands alone and some of its heritage features on the north and south sides are more easily visible.

According the city’s Heritage Designation notice, the single two-storey detached house was built in 1887.