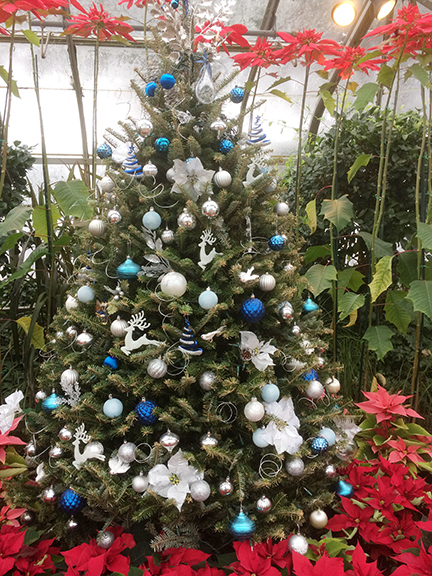 Garden Views columnist Mary Fran McQuade explains the legends behind some of our most popular Christmas plants including the tree and poinsettias.

Gardeners usually have some kind of plant indoors over the winter – maybe an African violet, a tropical dracaena or a jade plant. But in the month of December, it seems as though all our neighbours and the entire city decide to bring the outdoors in.

Why the outburst of greenery at this time of year? One way or another, it all goes back to ancient European pagan festivals.

Evergreens were part of pagan end-of-year parties in many countries thousands of years ago. Typically, boughs and branches decorated temples and homes, and garlands were worn or wrapped around pillars and doorways. The greenery celebrated the change from days of increasing darkness to days of increasing light that happens around the winter solstice.

When Christianity came along, it just made sense to kick out the old gods and substitute the birth of Jesus, instead. The evergreen branches that never died were linked to the enduring faith in the saviour.

Christmas trees have their own particular tales to tell. My favourite comes from Germany: Back in the 8th century, an English monk named Boniface set out to convert the ferocious Germanic tribes to Christianity. One especially stubborn village boasted of its great oak, dedicated to the god Thor. Boniface strode in one day, grabbed an axe and boldly chopped down the oak, directing people’s attention to a young fir tree, instead. He proclaimed it the new holy tree, with its fresh green branches symbolizing eternal life and its upright trunk pointing heavenward.

So Christmas trees came to Germany. Prince Albert is said to have brought them to Victorian England and German immigrants took the custom with them wherever they went.

We hear a lot about kissing under the mistletoe at Christmas. Like everything else pagan, the idea probably had a lot to do with fertility, but the most common story involves the old Norse gods.

Baldur the Beautiful was the son of Odin, ruler of the gods, and he was loved by everyone for his sweet nature and his golden good looks.

When he had a premonition of his death, his mother went around to everything on creation and got them all to promise not to harm her son. After that, the gods had a good time throwing sharp stuff at Baldur and seeing it all bounce right off.

But the troublemaker god Loki noticed that one plant had been overlooked when the promises were made: the spindly mistletoe. So he made a spear out of it and coaxed a blind god to throw it –  straight into Baldur’s heart. The grieving mother declared that ever after, mistletoe would be a symbol of love, prompting people to kiss beneath it.

The holly and the ivy

It’s the name of one of my favourite carols, and these Christmas greens likely also have their roots in pagan times. Evergreens in much of Europe, they came indoors to celebrate the transition from dark to light.

As the carol says, though, Christians saw the holly’s white blossoms as a symbol of the purity of Mary and her child. Less happily, the plant’s thorns and red berries recall the crown of thorns and the drops of blood shed at the crucifixion. Ivy, besides being evergreen, wraps around and clings to things, just as the faithful should cling to their faith.

The point of poinsettias

Amazingly, this Christmas plant is a success story of 20th century marketing. It was first found in Mexico and brought to the United States in 1828 as an exotic flowering shrub. And so it stayed until the early 1900s, when German immigrant Paul Ecke added poinsettias to his family’s California farming operation. He traveled the U.S., handing out samples of the plant and set up his own distribution network.

His son, though, moved poinsettias into the national spotlight by giving plants to TV stations and placing them prominently on the Tonight Show and Bob Hope Christmas specials. They even started to appear in women’s magazines as essentials in a happy family holiday celebration.

Meanwhile, the Eckes’ greenhouse business expanded beyond California, as they supplied starter plants to growers, who grew them on for retail shops to sell. At one time, their family business was the source for 90 per cent of the American poinsettia market.

Times have changed, and the Eckes are no longer in the poinsettia business. But that’s how our best-known Christmas flower, in all its red-and-green glory, came to be.