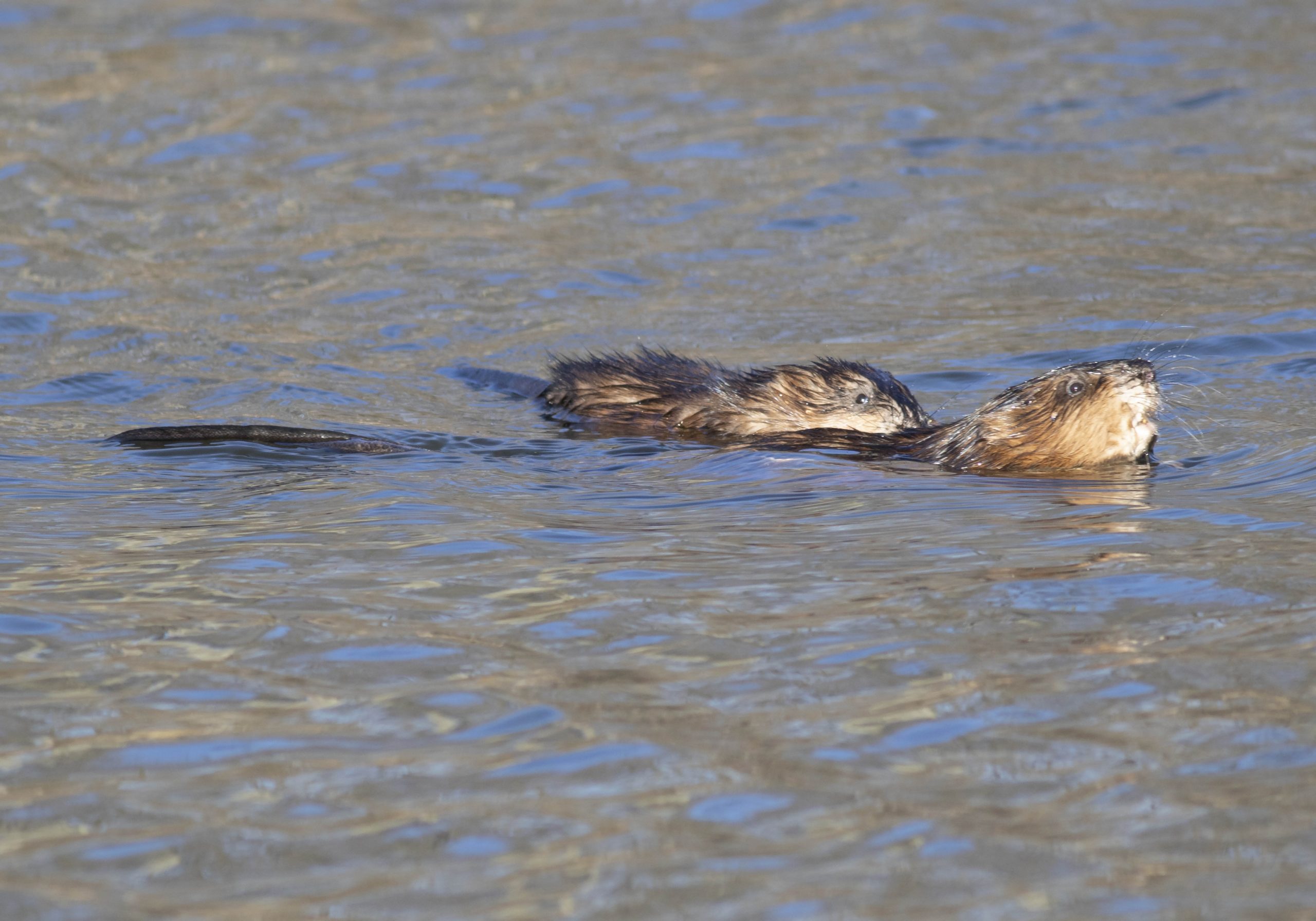 Columnist and photographer Ann Brokelman recently spotted a pair of muskrats in a pond by a quiet road. Inset photo shows one of the muskrats eating. Photos by Ann Brokelman

Some people say that I’m just unnaturally lucky when it comes to animal sightings. My husband might say that ‘anyone’ who spends as much time outside and looking as I do is bound to see something once in awhile.

I honestly just think it’s because my eyes have been ‘trained’ to look for certain things: A flash of movement in the snow, a splash in the water, or a single branch moving on a day with no wind. Case in point, the other day I was driving down a quiet road, alongside a pond, when a ripple in the water caught my eye. I pulled over, safely as always, and got out to take a closer look.

After a second ripple, I thought it might have been an otter, which is always an exciting find, so I took out my camera, slung the camera bag over my shoulder, and retreated a little so as to not spook whatever was in the water.

Using the camera as binoculars, I was amazed to see that it was actually a muskrat in the middle of the pond! Every time it dove under the water I would move a little closer to the water’s edge, hoping to get a better angle for a shot. Anytime he came up I’d freeze, so he wouldn’t notice me, fingers crossed he wouldn’t scare away. After I did this a few times, I realized there were actually two of them!

One was quite a bit larger than the other, which probably meant male and female, but it could also have been a parent with a kit. I’d never seen a muskrat eat before, and let me say: it’s adorable. Sometimes they would take a break to swim circles around each other. I watched them do this for a good 15 minutes before they disappeared behind a log and I lost sight of them. What a fun,  random encounter and some more great memories!

Muskrats are large rodents, (large compared to a mouse anyway), with noticeably short legs and little ears hidden in their thick brown fur. Their tail can grow to a length of 25 inches. Did you know that a muskrat can stay under the water for a good 15-20 minutes?

They stay active in the water and beneath the snow throughout the winter as they do not hibernate. This is a really crazy fact that I learned from a CBC article on muskrats in PEI: they have a separate set of lips inside their mouth and behind their front teeth to help them chew and eat, while swimming and diving, without swallowing water.

So, how do you tell the difference between a beaver and muskrat? Their size is the biggest clue, as a beaver can weigh up to 60 pounds and the muskrat only four pounds. However, you might mistake a young beaver for a muskrat, so the tail is the next thing to look for. The tail of a beaver is paddle shaped, while a muskrat’s is long and narrow. Beavers are strict vegetarians, eating mostly water plants and tree bark, but muskrats will eat fish, crayfish and snails, though cattails are usually their most common source of food.

Sometimes when I see an animal, I’m reminded of a song. When I was a teenager, I used to listen to a group called The Captain and Tennille, who sang a song called Muskrat Love.

Muskrat, Muskrat, candlelight
Doin’ the town and doin’ it right in the evenin’
It’s pretty pleasin’
Muskrat Suzie, Muskrat Sam
Do the jitterbug at a Muskrat Land
And they shimmy, Sam is so skinny

As I write the words, I can hear the song in head repeatedly. I sent this to my friend Pat Fowler, along with my muskrat pictures, and she sent me a note back saying that the song will be in her head all day long! Now I’m hoping to pass the ear worm on to the rest of you too.