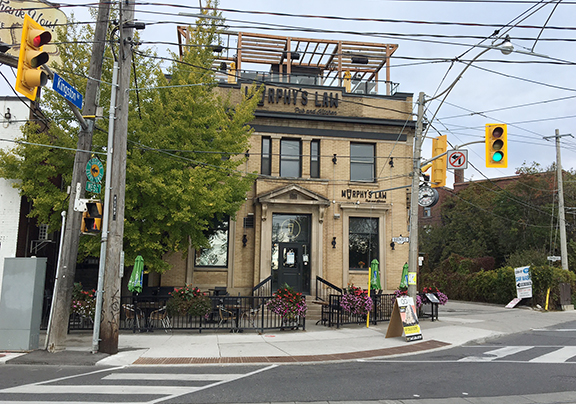 Beaches-East York Councillor Brad Bradford will host a virtual community consultation meeting on development plans for the Kingston Road and Queen Street East site that is home to the Murphy's Law building on the evening of Tuesday, Oct. 13. Photo by Alan Shackleton.

Residents are invited to attend a community consultation on the redevelopment of the Murphy’s Law building and surrounding area at Kingston Road and Queen Street East.

The development includes the former Days Inn Motel on Queen Street East, which is currently in use as a YWCA shelter for women experiencing homelessness resulting from the COVID-19 pandemic.

The shelter location is temporary however, as a west end YWCA location is under renovation. Their lease is set to end before developers – The Sud Group – start demolition and construction in summer 2021. Timelines of both were considered when making initial decisions, Beaches-East York Councillor Brad Bradford said.

“It just made sense for us to use a space that would have otherwise sat empty to provide a much needed home to women and families without other options,” he said. “The developer’s hoping to start construction work next summer which is around the time the shelter’s permanent west end location will be fully renovated.”

But before that it begins, Bradford wants to hear from the community, given the Murphy’s Law building’s historic status.

“This part of the community is going through a transformative moment,” he said. “It’s so important that the community gets involved and makes its voice heard so that we can bring our local perspective and approach on the future of this area.”

New additions to the area already include the Live Nation venue, expected to open when the pandemic ends.

More major redevelopments are expected east and west of Coxwell Avenue and Queen Street East including some affordable housing projects through the city’s program, Housing Now.

The application for the Murphy’s Law and Days Inn site proposal is for 110 residential dwelling units in the six-storey building. It would have 85 parking spaces within two levels of below grade parking and 114 bicycle parking spaces.

The virtual community consultation takes place Tuesday, Oct. 13 at 6:30 p.m. To participate, sign up at https://bit.ly/3nxnTPq