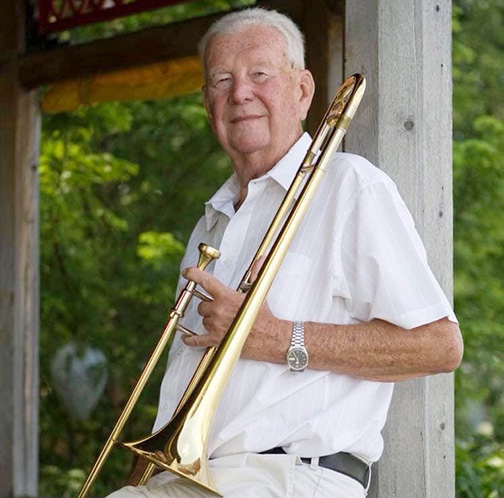 George Moxon McRae, well known in the Beach community for the decades he taught music at Malvern Collegiate, died on Saturday, Aug. 15.

McRae passed away at home in Picton, Ontario, surrounded by love and music, peacefully in his sleep, with those that loved and supported him infinitely.

“At his bedside were my mom, Penny, my sister, Pam, his grandson, Brad, and myself, playing his favourite song on guitar,” said son Craig. “I could not have asked for a better father or role model, and you could not imagine a better grandfather, husband, or human being. He loved everyone. He gave me my love for music, and that will stay with me forever, along with the beautiful morals and manners that he lived his life by, that I have lived my life by as well.”

The family shared thoughts of George McRae in an obituary sent to Beach Metro News.

“He touched the lives of thousands, all in a beautiful way. He will be missed greatly.”

“George’s legendary music career began at the age of three on the piano under the tutelage of his Aunt Kathleen. He attended Bedford Park Primary School and then Lawrence Park Collegiate. It was here that George also began his love of sports, which included track and field, football, rugby, speed skating, hand ball, tennis, squash, golf, boating and kayaking.”

McRae’s military career started while he was at Lawrence Park Collegiate and served as a Cadet.

“Following his graduation from high school, George enrolled in 1945 as an Infanteer in the Canadian Army. He later transferred to the Canadian Army Show as a Musician. In this capacity he both arranged and performed with the Army Show throughout Europe, including England, The Netherlands and Germany.”

After the war he returned to Canada in 1946, took his release from the army and attended the University of Toronto and the Royal Conservatory of Music where he studied trombone and piano.

“George’s teaching career began in 1948 when the Toronto Board of Education hired him as a music teacher, part of a pilot project introducing instrumental music into four Toronto High Schools. Thus began George’s illustrious career as the Director of Music at Malvern Collegiate Institute.”

“Over five decades he built the instrumental Music program at Malvern to unprecedented success. In so doing he taught thousands of students, many of whom have had their own successful careers in music and music education.

“George was proud to have his Malvern Marching Band perform for Royalty, signature opening ceremonies, Toronto Santa Claus Parades and many sporting events.”

McRae also resumed his military career in 1958 when he joined the 7th Toronto Regiment (RCA) Band. “He rose through the ranks from Private to Sergeant and then in 1966 was commissioned and appointed Director of Music. Captain McRae held this position until his retirement in 1977.”

McRae also had a professional music career performing widely as a trombonist and pianist.

“He performed with a number of musical artists and bands notably Guy Lombardo, Elvis Presley, Theresa Stratus to name a few. George had a sixty-year relationship with The Toronto Santa Claus Parade, beginning as a military musician, then as the Director of the Malvern Marching Band.”

After retiring from teaching at Malvern in 1986, McRae was appointed Band Co-ordinator for all bands taking part in the Toronto Santa Claus Parade.

“In 2006, at the age of eighty, he stepped back and in so doing passed the mantle to his children, Pam and Craig and grandson Bradley to carry on this great tradition.”

“In between all of his commitments, George and Penny were fortunate to be able to travel the world. Upon retiring from his teaching career, they settled permanently in Picton, Ontario.

“Unable to let grass to grow under his feet, George continued his musical journey with the 8 Wing (Trenton) Concert Band playing trombone, conducting and announcing from 1992-2009. He could be seen racing his powered Zodiak up and down the Picton Bay on ‘gig-free’ days!

“Who was George McRae? Perhaps Russ Little, former student and Jazz legend himself said it best: ‘George led by example. He has so much integrity. He’s such a four-squared good guy with no BS about him……He manages his life well, he’s honest and grounded and handles relationships with people in a straight forward way.’”

Generations of Malvern music students will remember these words from McRae:

“Practice at home. Sit up straight. If you can’t make it, fake it. The Conductor makes mistakes but he is never wrong. If you aren’t at the show you had better be in hospital or you will be. And finally: Strive for tone.”

George Moxton McRae is survived by his life partner of more than 60 years, Penny, his children Craig and Pam and his three grandsons Bradley, Ryan and Colin.

Cremation has taken place and the family would appreciate donations to the Prince Edward County Memorial Hospital Foundation in George’s name.

“Thanks for the Memories George! Onward, Malvern!”