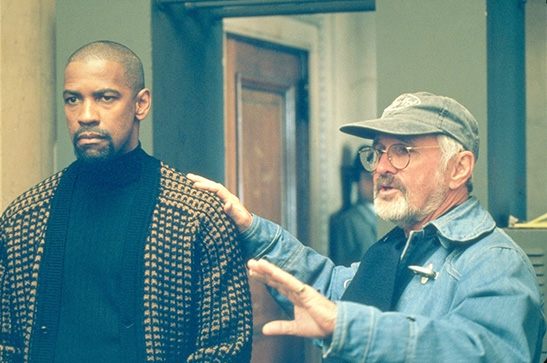 Director Norman Jewision works with Denzel Washington during the filming of 1999’s The Hurricane.

“We have to deal with prejudice and injustice or we will never understand what is good and evil, right and wrong; we need to feel how ‘the other’ feels.”
(Norman Jewison in This Terrible Business has been Good to Me.)

Times of crisis bring out the best in people …and the worst. We’ve seen incredible courage from health-care heroes and racist rants from covidiots who want to blame “the other”.

Filmmaker Norman Jewison was born in 1926 and grew up during the Great Depression when a wave of anti-Semitism and Fascism swept the world like a virus of hatred. No community was immune. In the summer of 1933 a Swastika Club “patrolled” the Boardwalk to “rid” the beach of “undesirables”.
Jewison learned about prejudice at a young age.

In his memoirs he writes that he was bullied because of his last name. His classmates at Kew Beach School beat him up and called him names. Little Norman even thought he was Jewish.

The Jewison family lived above their dry goods store at Kippendavie Avenue and Queen Street East.

At the age of six Norman started going with his friend, Stanley, to the nearby synagogue on Kenilworth Avenue (the Beach Hebrew Institute celebrates its 100th anniversary this year).

One day his friend’s mother asked Stanley why Norman’s parents never bring him to shul. Stanley replied brightly, “They do, too. They go to Bellefair United Church every Sunday.”

Norman’s mom explained to him that “the Jewisons have always been Methodist”.

Jewison relates this story in the context of a 1969 meeting about directing Fiddler on the Roof. He blurted out to studio heads, “What would you say if I told you I’m a goy!”

Jewison got the job and made one of the great musicals. Fiddler won three Oscars telling a tale not just about “tradition” but also the intolerance of the pogroms (massacres) in Eastern Europe:

“I had felt I shared a bond with the real Jewish kids I went to school with. It had a lot to do with being treated as a minority, an outsider, a victim, and the feeling never left me for the rest of my life.”

After serving in the Canadian Navy Jewison hitch-hiked across the American South in 1946 still wearing his dress uniform and saw segregation for himself.
One day he walked to the back of a bus and sat down with the black patrons. The driver yelled at him, “You tryin’ to be smart, sailor?”

It was from these experiences that “the desire to make films such as In the Heat of the Night and A Soldier’s Story took root.

“It was still with me when I made The Hurricane about Hurricane Carter, a Black man wrongly convicted of murder,” he wrote.

Jewison considers these films about racial injustice to be his most important works.

In 1978 Jewison came back to Canada to live. The Hurricane (1999) was filmed mostly in Toronto where much of the story is actually set.
The Canada Post box where young Lasra mails a letter to Carter is still there on Gerrard Street East near Woodbine Avenue. A house on Kingswood Road was also used as a location. You can come home again.

In times of trouble many blame “the other”.

Films can help us see life through the eyes of those who are different. We’re all in this together.

All it takes for hatred to spread is for people of goodwill to do nothing. In Fiddler on the Roof Jewish villages are burned. A sympathetic constable sighs, “Orders are orders, you understand.”

Dr. Martin Luther King, Jr. spoke of “the fatigue of despair” but reminded us that “the arc of the moral universe is long, but it tends toward justice.”

As one of Norman Jewison’s films is titled, let’s hope the future leads to And Justice for All.