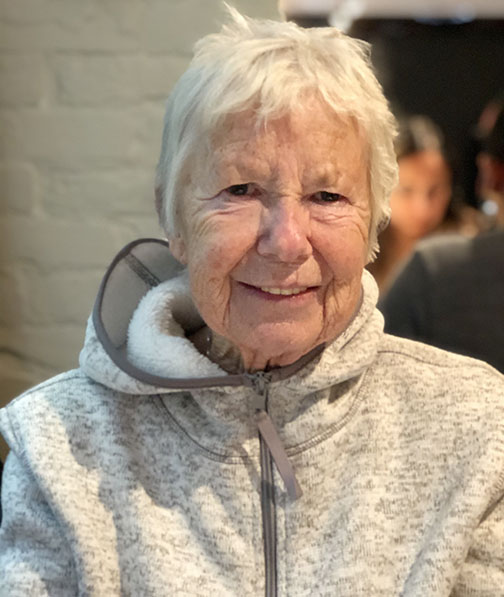 Resident and active community member Iola Baumgartner is being remembered for her strength, optimism and determination. Photo: Submitted.

Longtime local resident and active community member Iola Baumgartner is being remembered for her strength, optimism and determination.

Baumgartner died peacefully at the age of 79 on Aug. 6 at Princess Margaret Hospital with her husband of 55 years, Norbert, and her daughter Nikki by her side.

“It’s hard to sum up Iola in a few words,” said friend Jane Anderson in an interview with Beach Metro News this week. “For me, she was a wonderful friend. Warm and kind and thoughtful.”

Anderson added that everyone who knew Baumgartner felt that way about her.

“She was liked and loved by so many people because she made an effort to connect with people. But she made the connections effortlessly. She liked people and liked to help them.”

The words “positive and generous” always come up in describing Baumgartner’s personality, said Anderson who first came to know Baumgartner through playing squash at the Balmy Beach Club.

She said many of Baumgartner’s friends were inspired by her outlook on life, her determination and her courage.

“Other friends have said one of their favourite memories of her was watching Iola cross the finish line at the Toronto Marathon at age 60. That was a testament to her spirit and determination and was an inspiration to others,” said Anderson.

“She was very special and all of us are missing her.”

Those sentiments are shared by her extended family and many friends in Canada, England, Europe and the United States, said her obituary notice posted in the Toronto Star.

The text of the obituary is below:

“Iola was born in Trevor, Wales on December 12th, 1940, youngest of three children. After the war, her family moved back to England and she was raised and schooled in Birmingham.

“In 1964, she travelled to Canada with friends by steamer, arriving in Montreal. After a brief stay in Montreal she made the journey to Vancouver by CP Rail. Soon after she met the love of her life, Norbert. They spent a few years in Vancouver where their daughter, Nikki, was born, and then moved to Ontario.

“Iola held many different positions in her working life, SRA (IBM), Shulton and Revlon working in the EDI (Electronic Data Interchange) field. Near the end of her career, she chose to do consulting work, allowing her to enjoy more travel. Iola had a passion for travel, activities, friendships and family.

“Iola and Norbert enjoyed many adventures together traveling by plane, train, boat, car and with some of their most memorable trips together by canoe.

“Iola became an active member in the Balmy Beach Club competing in the paddling section, joining the ladies squash section at the outset and competing in the Toronto Squash Ladies league. Later she added running to her sports and completed the Toronto Marathon and many half marathons.

“Iola loved living in the Beaches, where over 45 years, she developed many long lasting friendships. She was also a community advocate always willing to help out.

“She volunteered for organizations such as Achilles and Wellspring as well as canvassing for Cancer support.

“Iola held her family close, spending as much time as she could with her daughter and her family out West.

“Making as many as four visits a year, the joke was that a visit could not end until the date of the next was set.

Her grandsons were her treasures and she was proud to be their Gramma. With the exception of a couple of times, due to treatments, Gramma was there for every one of her grandsons’ birthdays in May and October.

Iola was known for her giving nature, strength of character, optimism and energy. Iola was quick to offer a helpful hand and thoughtful word.

“Iola was diagnosed and received treatment in 2007 for ovarian cancer and was fortunate to not have a reoccurrence until 2014. Unfortunately, after this, the cancer recurred more frequently. Iola balanced her fight with quality of life and she did so with great strength, optimism and determination. In the face of adversity, she loved life!

“Using words from one of her close friends, “Iola, throughout her fight has been a beacon of strength, kindness and encouragement for all who have also battled life’s challenges’.

“Following Iola’s wishes, there will not be a service and there will be a commemorative tree planted in her

honour. We are requesting the tree to be planted in the Beaches area or Ashbridges Bay. We welcome all to visit the tree and pause to reflect and remember Iola.

“We would like to thank the staff at Princess Margaret Hospital for the wonderful care given to Iola.”

Baumgartner is survived by her husband Norbert of 55 years, her daughter Nikki (Andy) and grandchildren Riley and David.

Donations in memory of Iola Baumgartner can be made to the Princess Margaret Hospital’s PHM Gynaecology Unit or the Palliative Care Unit.

Condolences and memories shared at https://www.dignitymemorial.com/obituaries/toronto-on/iola-baumgartner-9301374