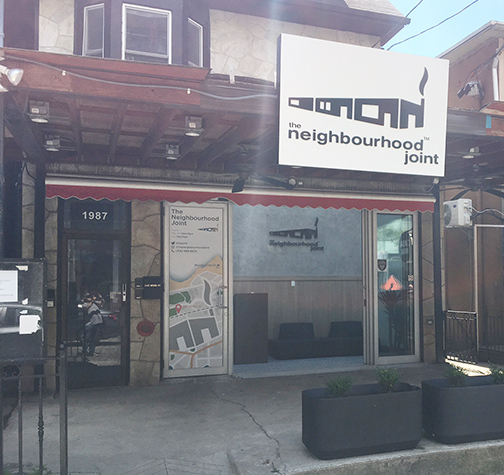 The Neighbourhood Joint cannabis store on Queen Street East in the Beach celebrates its official opening on Saturday, Aug. 1. The store has been open since earlier this week, but the celebration is set for Saturday. Inset photo: A cannabis retail store is proposed for 800 Queen St. E. in the Riverside area, which is part of a cluster of applications which has prompted the city to ask the province for a review of location guidelines. Photos by Alan Shackleton.

Toronto has formally requested the province’s Alcohol and Gaming Commission to review its proximity rules of new cannabis retail stores opening in the city.

The request follows what some residents and Toronto councillors are calling “cannabis clustering” on Queen Street East and other retail-heavy neighbourhoods across the city.

Toronto-Danforth Councillor Paula Fletcher presented the motion first at Toronto and East York Community Council on July 16 for the AGCO to consider proximity to schools, parks, public spaces, and other cannabis retail stores when reviewing applications.

“In the past few months a noticeable cluster of cannabis shop applications have been made on Queen Street in the Riverside Neighbourhood of Toronto-Danforth,” Fletcher said. “The provincial regulations are far more permissive than the originally proposed municipal rules, which would have prevented some of the clustering issues.”

In response to cannabis clustering in East Toronto, and beyond in other neighbourhoods, the city adopted Fletcher’s motion.

It requests AGCO to consider the proximity and number of community services that involve children and/or vulnerable adults, the proximity of parks and other publicly accessible places which support or enable consumption of cannabis outside of private homes, and any communications from the city that do not support clustering of pot shops.

The motion was partially prompted by a letter Fletcher received from the Ralph Thornton Community Centre about the number of stores in a small area along Queen Street East in her ward. In the letter, management board chair Alan Lennon said the clustering doesn’t make business sense, nor does it consider the community’s needs.

“While we are not concerned about marijuana dispenseries per se, the notion of having this many shops in close proximity to each other will inevitably lead to the failure of some or all of these shops,” Lennon wrote. “A concentration of one kind of retail simply means that there will well be a lack of other kinds of retail options in the neighbourhood.”

“A lack of variety in retail options will result in fewer pedestrians and less traffic because of the lack of choice available,” he added. The city received notices of these shops between May 4 and June 12, and they’re all within one city block (along Queen Street East in the area of Broadview Avenue), Fletcher said.

“Four cannabis shops in such a small stretch is too much,” Fletcher said. “Residents are concerns about the impacts these shops will have on the area.”

Beyond Riverside, plenty of pot shops are popping up in other East Toronto areas including the Beaches. There are three cannabis shops opening up farther east on Queen Street East.